Kuwait Financial Centre “Markaz” stated that during H1-2017, GCC corporates posted a negative 1% growth compared to the same period last year. Saudi Arabia, Bahrain and Kuwait were three countries to put up positive earnings performance growing by 7%, 6% and 2% respectively. Saudi Arabia’s earnings growth was largely helped by the positive momentum in its non-oil private sector while Kuwait was largely helped by the positive performance in the commodities sector and its real estate sector.

Lower oil prices continued to persist, despite the humongous efforts taken by the OPEC cartel to reduce the supply glut. Brent crude declined by 9.3% in Q2 2017 closing at USD 47.92 compared to USD 52.83 at the end of Q1 2017. Overall, IPE Brent crude has tumbled 15.7% from the start of 2017 making it the worst performing first half for oil since 1998. Lower oil prices results in lower deposits being made into the banks and as result lowers credit being pumped into the economy. As a result of this, banking sector earnings have declined by 1% during H1 2017 compared to the same period last year. Going forward, we expect GCC corporate earnings to expand by 8.1% for the full year in 2017 based on stabilizing oil prices and resilience in margins.

Saudi Arabia witnessed a 7% increase in its overall earnings during H1 2017 largely prompted by the earnings increase in its commodities and telecommunications sector. Saudi Arabia’s commodities and telecom sector witnessed 13% and 12% increase in its earnings respectively. Surprisingly, the banking sector witnessed a 2% decline in earnings. Al Rajhi Bank and Alinma Bank were the only banks in the country to witness positive earnings growth at 8% and 14% respectively. Construction related sector was the most affected and has been plagued by delayed cash cycle leading to significant losses as a result the earnings fell by 61%.

Kuwait’s banking sector suffered a 2% decline in its earnings during H1 2017 owing to difficult credit situations and subdued growth in its local market. National bank of Kuwait, Boubyan Bank and Burgan Bank posted double positive earnings growth of 9%, 15% and 23% respectively. Among the telecom players, Zain posted a negative growth of 8% owing to one-off extraordinary currency devaluation in Sudan. Ooredoo Kuwait witnessed a 21% increase in earnings driven by customer addition and cost-cutting efforts. Kuwait’s commodities sector performed well driven by increasing commodity prices and posted a 20% increase in its earnings.

UAE’s overall earnings declined by 2% during the 1st half of 2017. UAE’s banks managed to increased their earnings by 1% during H1 2017 while the other two major sectors of the economy – telecom and real estate posted 7% and 37% decline in earnings.

All of the Qatar’s sectors with the exception of banking witnessed declines in their earnings during H1 2017. Telecom, Commodities and Financials witnessed a decline of 26%, 32% and 17% respectively. Banking sector witnessed a 1% increase in earnings driven by good performances in Qatar National Bank and Qatar Islamic Bank. Qatar’s telecom sector was the worst performing sector as Ooredoo witnessed a 26% decline in net profits while Vodafone Qatar is yet to turn profit since its inception. 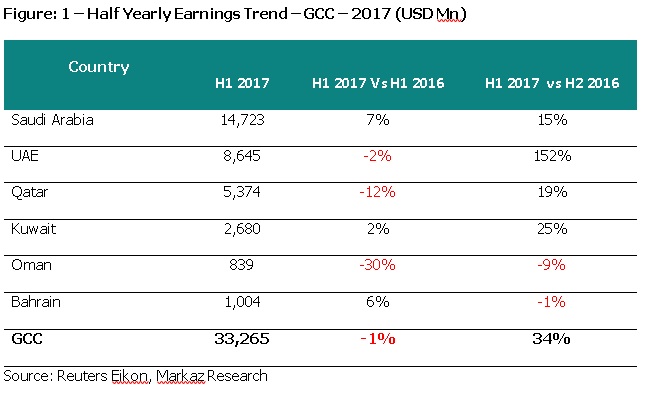