Kuwait Financial Centre “Markaz” recently released its Monthly Markets Review report. Markaz report stated that gains for the Kuwait stock market accelerated in the month of March as it continued its positive trend for the third consecutive month this year on the back of strong global market performance. Kuwait registered a gain of 8.7% in March and 12% for the year as investors positively registered the news that MSCI proposed to reclassify the MSCI Kuwait Index from Frontier to Emerging Markets as part of the 2019 Annual Market Classification Review. Among the blue chips, Kuwait Financial House (KFH) emerged to be the best performer, with monthly gains of 11.7%. Boubyan Bank and National Bank of Kuwait also registered substantial gains of 11% and 8.1% respectively for the month. Kuwait banking stocks benefited greatly as restrictions on foreign ownership cap of 49% on domestic banks were lifted.

The reforms initiated by Capital Markets Authority and Boursa Kuwait began to bear fruits as they prompted major index providers across the globe to reconsider the Kuwait’s market classification. These reforms included introduction of T+3 settlement cycle for both local and foreign investors (May 2017) and a delivery versus payment (DvP) system (April 2018). Within a span of two years, Kuwait was upgraded to an emerging market by FTSE, S&P and J.P Morgan. In addition, Boursa Kuwait is in contention for a potential reclassification by MSCI in 2019. Benefitting from the above, Boursa Kuwait liquidity from the lows of June 2017, has improved by 89% (3 month rolling average basis). The increase in liquidity is more observable during the last four months starting December 2018.

The performance of various GCC market indices diverged during the month with Saudi Arabian Tadawul index gaining 3.8% in the month of March, registering a considerable positive movement from the negative returns of 0.8% witnessed last month.  The overall yearly gain for Saudi Arabia stands at 12.3% and ranks the best among all GCC market for 2019. On the anticipation of Tadawul being upgraded by FTSE Russell, MSCI and S&P Dow Jones (S&P DJI) indices, foreign investors are looking to increase their investments in the Saudi Stock Exchange. Foreign investors have been a net buyer since December 2018, as the net traded value by foreign investors in 2019 (upto 27th March) is at SAR 8.2billion (USD 2.18 billion). Qatar Bahrain, and Dubai Financial Market General Index ended the month on a flat note while Abu Dhabi index registered a monthly loss of 1.2%. Oman trailed all other markets with a monthly loss of 3.9%.

Global Equities continued to offer positive returns, however, the pace of growth seems to have slowed down. This was evidenced by MSCI World index which increased by just 1% for the month of March. The US S&P 500 index saw gains of 1.8% in March with yearly gains now at 13.1%. However, growth forecasts for the US economy depicts a negative outlook as the Federal Reserve voted to hold interest rates steady and shaved its growth forecast.  Indian markets dominated the equity indices across the globe delivering monthly returns of 7.82% to its investors. The Chinese markets continued to offer positive returns with a 5.1% gain in March, taking the yearly gains up to a staggering 24% in 2019. The Chinese markets could see further growth upwards as the government has announced stimulus measures of nearly USD 300 billion.

Oil markets have continued the rally for the third straight month in 2019 as Brent Crude prices rose by an additional 3.6% to USD 68.4/bbl during the month of March. Oil prices have found support from efforts by the OPEC and non-affiliated allies like Russia, to trim output and prices are expected to rise further. On top of U.S. sanctions, Venezuela is experiencing massive power cuts, which has crippled its oil industry further pushing the prices higher. 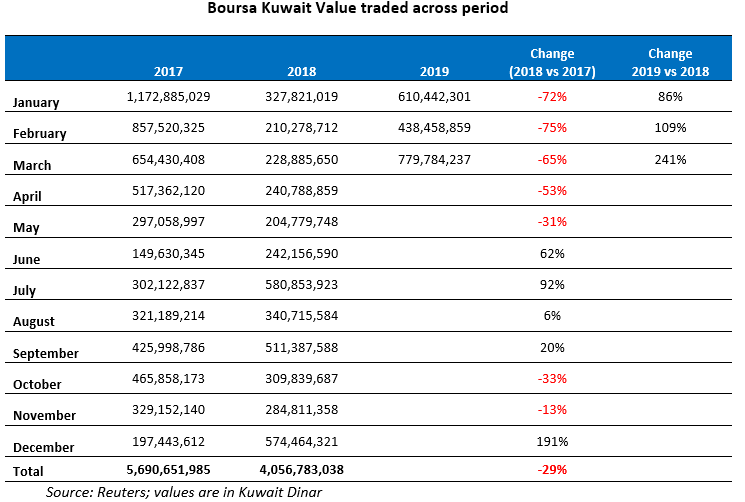 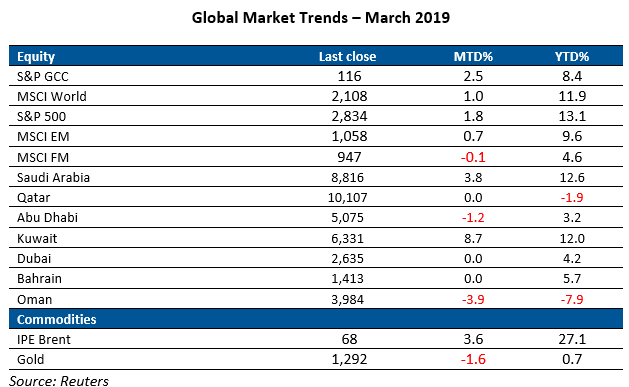