Kuwait Financial Centre “Markaz” recently released its Monthly Market Research report. In this report, Markaz examines and analyzes the performance of equity markets in the MENA region as well as the global equity markets for the month of May 2017.

MENA markets, with the exception of Egypt closed in the red for the month of May. Dubai, Abu Dhabi, Saudi Arabia and Qatar markets shed 2.2%, 2.1%, 2% and 1.6% respectively. Middle East funds pulled out of the UAE markets in view of soft real estate activity and tight liquidity prevailing causing the Dubai and Abu Dhabi markets to decline. Despite positive events such as Trump’s visit and MSCI announcing that the inclusion of Saudi Arabia into emerging markets would happen sooner, fragile outlook on oil turned investors bearish. Kuwait price index and weighted index lost 0.8% and 0.9% respectively. Egypt was the only bourse in MENA region to gain 5.6% last month, as foreign institutional investors welcomed the central bank’s efforts to curtail inflation and increased their investments.

Value traded and volumes in May reflected a negative mood, with volume traded, dropping by 35% while the turnover in the market declined by 7.2%. All MENA markets, barring Qatar and Egypt, witnessed fall in liquidity. Kuwait saw a 75% fall in liquidity while it declined by 22% in Dubai. Liquidity declines are common in the MENA bourses, especially due to poor trading activity in the month of Ramadan. In terms of valuation, P/E of Morocco (18.9x), Qatar (14.33x), and Kuwait (14.22x) markets were at premium, while the markets of Dubai and Bahrain (9.3x), and Egypt (9x) were the discount markets in the MENA region.

Many blue chips were in the red in May, while companies such as DP World, Kuwait Food Company and Mashraf Al Rayan gained 12.5%, 11.3% and 6% respectively. DP world is expected to expand its operations to countries such as Russia. It has already obtained permission for the container operation of Santos port in Brazil. Expansionary activities improved investor sentiment over the prospects of the company. Among companies that lost, Ezdan Holding plunged by 27.5% followed by Kuwait Projects Company that dipped 15.7% last month. Ezdan holding’s shareholders have given preliminary approval for the company’s plans for delisting leading to the selling pressure in the market.

It was indeed beneficial to the kingdom of Saudi Arabia that Mr. Donald Trump made it the choice of his maiden international visit. The visit and the volume of deals signed has put to rest some of the anxieties related to his ascent to power. Trump’s visit has surely added feed to the diversification, especially through various deals signed in defence and infrastructure arena.

Deals worth USD 110 bn were signed, mostly relating to defence. These deals will become effective in the near future as most of them have been already approved. Defence spending forms the bedrock of the visit and deals signed. In a scenario of uncertainties in oil prices and geopolitical tensions, Trump’s visit provided fresh assurance on ensuring security in the region and exploring US-Saudi business opportunities. Investors are confident over future business, especially in technology and defence sector, much needed for the Saudi economy now.

Brent crude declined by 2.7% in May 2017 declining to USD 50.31 compared to USD 51.73 at the end of April 2017. OPEC and non-OPEC members decided to extend the current production cuts for a period of nine months up to March 2018. Increasing supplies from the US shale producers and announcement made by US to sell oil in plans to reduce its Strategic Petroleum Reserve (SPR) led to the continuing fall in oil prices. Libya's oil production has risen to 827,000 bpd in the beginning of May adding to the supply glut in the market. 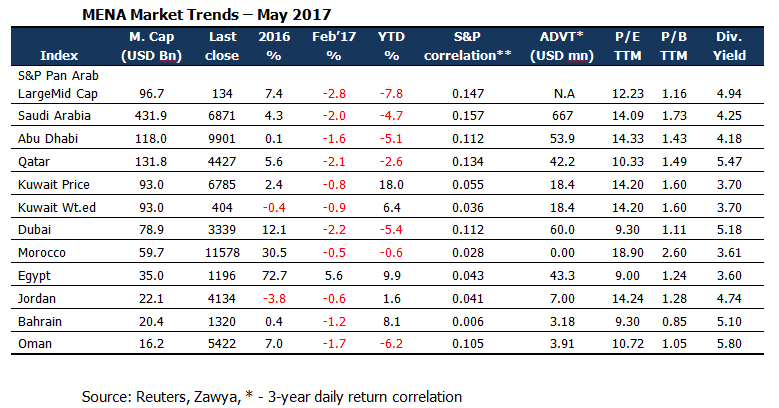 Kuwait Financial Centre K.P.S.C “Markaz”, established in 1974, is one of the leading asset management and investment banking institutions in the Arabian Gulf Region with total assets under management (AUM) of over KD959 million as of March 31, 2017 (US3.14 billion). Markaz shares are listed on Boursa Kuwait since 1997.