Kuwait Financial Centre “Markaz” recently released its outlook on KSA stock market for the full year of 2016. In this research report, Markaz analyses the performance of KSA stock market in 2015 and provides an outlook for 2016 based on corporate earnings potential, valuation attraction, economic factors and market liquidity.

The report stated that the year 2015 was challenging for KSA economy, with the decline in oil prices impacting its economic growth. Standard & Poor’s cut KSA sovereign credit rating for long-term foreign and local currency by one notch to 'A-plus/A-1'. The slowdown of Chinese market exerted more pressure on the Tadawul market performance, to the already contracting market due to lower oil prices causing it to decline by c.17% during 2015.

The report pointed out that the majority of the sectors underperformed during 2015, with Media & Publication, Transport, Energy and Utilities and Real Estate being the exceptions. The Saudi construction and cement were the worst hit sectors and they lost 34% and 30% respectively. The decline in banking sector index by 14.9% during 2015 establishes the challenges in the form of liquidity tightening, as a consequence of low oil prices and increased government borrowings that will impact the banking sector.

Going forward, the report evaluates the attractiveness of the KSA stock market based on four-factor model.

On a standalone basis, KSA, with a P/E ratio of 13x appears to trade at elevated valuation levels, given that MSCI emerging markets constituents UAE and Qatar were trading at a lower premium. On P/B basis, KSA market is the second expensive among all GCC nations after Qatar.  Dividend yield for KSA stands at 4.2%.

The continued expected lower oil price in 2016 is expected to exert further pressure on corporate earnings. Lower credit off take and increasing cost of funds due to liquidity squeeze is expected to impact the bank earnings. The large petrochemical segment of KSA is expected to contract due to lower price realization of its products, resulting in almost 15% decline in earnings for companies operating in the commodities segment in 2016 compared to 2015. The lower anticipated growth rate is likely to translate into flat growth rate for real estate sector and result in contraction of the construction related sectors.

Aggregate value traded of equities in KSA reached a value of USD 461.6bn in 2015. This represents a 15% lower value from the value traded registered in 2014. The drop in value traded can be attributed to lean trading triggered by the negative investor sentiment due to lower oil prices. However, this is expected to marginally increase to 93% of market cap during 2016.

The trading activity on Tadawul is dominated by the retail investors with the institutional investors contributing only 9% of trading volume on Tadawul exchange. However, with the relaxation of rules with regards to foreign investment in Tadawul, this institutional investment can be expected to grow. The stock market turnover ratio for KSA has been consistenly high compared to the other GCC markets. The KSA market liquidity is expected to remain high during 2016 as well.

Based on the four force analysis, the 2016 outlook for KSA is “Neutral”. Due to its strong reserves and low levels of debt, KSA will manage to weather low oil price era without significant troubles. However, this would certainly slow the economic engines to a certain extent which will be reflected in the corporate earning during 2016. The low investor confidence will reflect in the valuation of the stocks. However, KSA will continue to be a highly liquid market in the region and participation of Qualified Foreign Institutional Investors (QFIIs) will complement the existing liquidity status of the market.

Kuwait Financial Centre K.P.S.C “Markaz”, established in 1974, is one of the leading asset management and investment banking institutions in the Arabian Gulf Region with total assets under management (AUM) of over KD 1.05billion (USD 3.47bn) as of September 30th, 2015. Markaz was listed on the Kuwait Stock Exchange (KSE) in 1997. 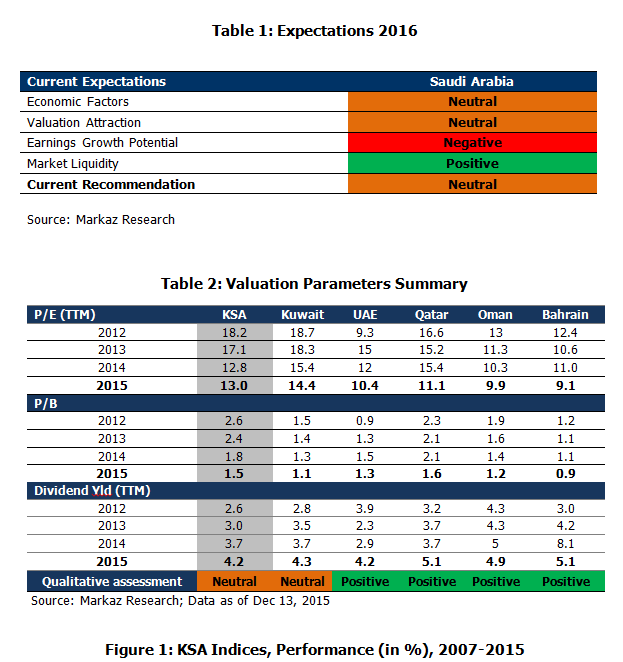 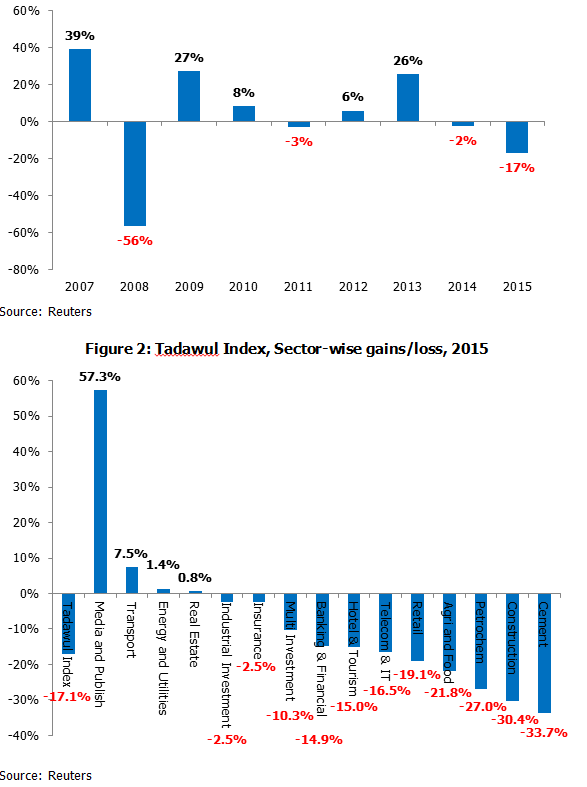