Markaz: Global and regional equities move up in May; Oil price up 50% as lockdown restrictions ease worldwide

Kuwait Financial Centre “Markaz” recently released its Monthly Markets Review report for the month of May 2020. Markaz report stated that, GCC markets moved up during May, gaining 1.3% the month after a sharp rebound in April. Oil markets continued their recovery, clawing back some of their losses for the year.

Kuwait markets were positive, with the Kuwait All Share index registering gains of 0.4% in May. Economic activity continued to take a hit as Kuwait’s government imposed a 20-day total curfew from May 10th to May 30th in an attempt to curb the spread of COVID-19. However, the restrictions were eased at the end of the month, making Kuwait the third GCC country after the UAE and Saudi Arabia to ease restrictions. The government and the Central bank continued to enact measures to support the economy as domestic banks allocated KD 2 billion to the soft loan portfolio, which is expected to be granted to SMEs, companies and clients affected by the virus outbreak. Meanwhile, Central Bank of Kuwait has asked Kuwait Finance House to reassess its acquisition of Ahli United Bank (AUB), causing AUB’s shares listed in Boursa Kuwait to fall by 9.2% for the month. Among sectors, Basic materials was the top gainer among Kuwaiti equities, gaining 5.5%, while Oil and gas sector was the top loser, falling by 4.9%.

Regionally, the S&P GCC composite index rose by 1.3%, with Saudi Arabia, Qatar, Kuwait and Oman registering gains. Saudi Arabia’s Tadawul index increased by 1.4% for the month followed by Qatar whose index gained 0.9%. Abu Dhabi, Dubai and Bahrain lost 2.1%, 4.0%, and 3.1% respectively. Global rating agency Fitch said that GCC countries are expected to post fiscal deficits of 15%-25% of GDP in 2020, with only Qatar's deficit staying in the single digits at 8% of GDP. Saudi Arabia took steps to ease the impact of low oil prices on its budget by announcing that it would be suspending cost of living allowance from June 1, and increase value added tax (VAT) to 15% (from 5%) from July 1. However, the UAE authorities said that it does not have plans to raise its VAT rate beyond 5%. Oman announced an additional cut on its budget by 5% during its latest announcement in May, adding to its earlier announced cut of 10%.

Markaz report also stated that among the GCC Blue Chip companies, SABIC was the top gainer for the month, increasing by 14.6%. Meanwhile, First Abu Dhabi Bank lost 4.0% for the month. The bank had earlier announced that it has put discussions to acquire the Egyptian assets of Lebanon’s Bank Audi on hold due to tough market conditions.

The performance of Global equity markets was positive for the second consecutive month, with the MSCI World Index gaining 4.6% in May. U.S. equities (S&P 500) gained by 4.5% for the month despite its GDP shrinking 4.8% in Q1 2020 on a year-on-year basis. The U.S. markets are now down by just 5.8% on a year-to-date basis, which is a much lesser decline than most global markets despite the country’s unemployment rate touching its highest since the Great Depression. The UK (FTSE 100 index) markets also stayed positive, gaining 3.0% for the month. The European Union revealed details of its Economic Stimulus Plan through which it would issue EUR 750 billion worth bonds. EUR 500 billion would be distributed to member countries as grants while EUR 250 billion will be available for loans. The plan is pending for approval by parliaments of member nations. Emerging markets were flat for the month, with the MSCI EM increasing mildly by 0.6%.

Oil prices closed at USD 37.8 per barrel at the end of May 2020, which translates to a monthly gain of 49.7%. The volatile commodity surged during the month as several countries eased their lockdown measures. Saudi Arabia also announced that it would reduce its crude oil production further by 1 million barrels per day from June 2020. Gold prices continued to rise steadily, increasing 2.8% in May, while Silver prices surged by 18.8% during the same period. 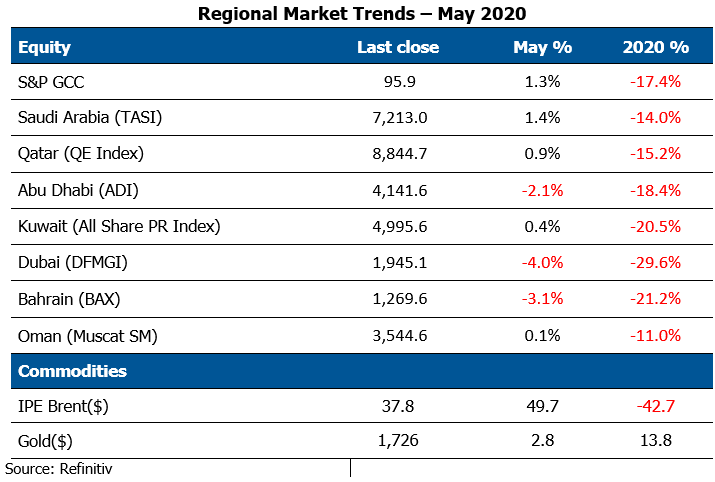