Markaz: GCC Sovereign and Corporate Issuances decreased by 12% in 2018

Kuwait Financial Centre “Markaz”, in its recent research report titled GCC Bonds & Sukuk Market Survey, has highlighted the trends pertaining to bonds and sukuk issuances in the GCC region during 2018.

The aggregate primary issuance of bonds and sukuk by GCC entities, including Central Banks Local Issuances, GCC Sovereign and Corporate Issuances, totaled USD153.74 billion in 2018, a 11.7% decrease from the total amount raised in 2017. Saudi entities were the top issuers in terms of total value issued.

Sovereign Vs. Corporate: Sovereign issues contributed 50.3% to the overall market with a total value of USD46.19 billion as compared to USD65.28 billion in 2017. Total value raised by corporate entities in 2018 increased by 17.19%, to USD45.68 billion in 2018 from USD38.98 billion in 2017. Saudi Arabia Government raised USD23.88 billion out of which USD10.88 billion (SAR48.78 billion) was through domestic bonds and USD13 billion through US Dollar denominated Bonds and Sukuk. Qatar, Oman, Sharjah and Bahrain governments raised USD12 billion, USD8 billion, USD 1 billion and USD 1 billion respectively. Kuwait was the only GCC sovereign entity not tapping the international bond markets in 2018.

Sector Allocation: Government sector accounted for the largest amount raised during 2018, with USD46.19 billion representing 50.3% of the total amount raised as compared to USD65.28 billion issued in 2017. The Financial sector followed with USD27.20 billion (29.6% of total market) raised through 250 issues.

Maturity Profile: Issuances with tenures of less than five years raised the highest amount, USD38.76 billion, through 237 issuances, representing 42.2% of the total amount raised. Issuances with maturities more than 5 years to 10 years represented 31% with USD 29.13 billion.

Issue Size Profile: The sizes of GCC bonds and sukuk issuances during 2018 ranged from USD0.77 million to USD6 billion. Issuances with principle amounts greater than or equal to USD1.0 billion raised the largest amount - USD52.42 billion, representing 57.05% of the total value.

Rating: During 2018, a total value of 80.5% of the Sovereign and Corporate issuances were rated by either one or more of the following rating agencies: Moody’s, Standard & Poor’s, Fitch, and Capital Intelligence - out of which 91.2% issuances had investable grade ratings.

Listing: During 2018, 88.9% of the total issuances or 189 GCC Bonds and Sukuk issuances, with an aggregate value of USD81.71 billion were listed on exchanges. Listing on international exchanges accounted for 91.1% with Dublin accounting for the listing of 61 of such issuances. 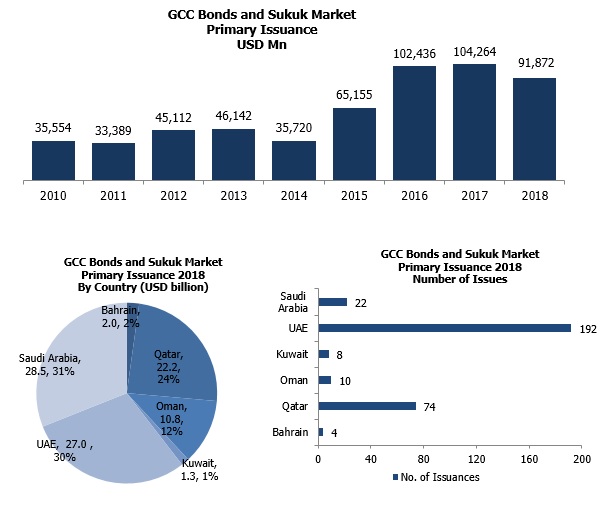