Aggregate net profits from Financial Services in FY13 came in at USD 1.3Bn a growth of 54% over FY12. Real Estate sector’s earnings amounted to USD 3.7Bn growing at 47% for FY13. Construction related companies and conglomerates also had clocked an earnings growth of 16% and 12% respectively. 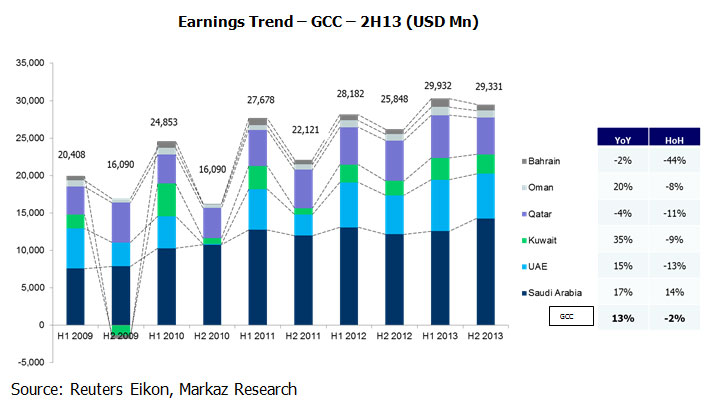 GCC banks also displayed solid growth during 2013 and the overall earnings grew by 9% for the year 2013.

Bahrain and Kuwait topped the list of countries in terms of earnings growth at 24% each, supported by good performance in banking, financial service and real estate sectors. Kuwait’s performance can be attributed to its resurgence in its real estate whose earnings grew by 729%, albeit from a low base, during the year 2013. In contrast to UAE and Qatar, the resurgence in Kuwait real estate sector wasn’t reflected in its construction sector which ended the year with a full year negative earnings growth of 11%.

Oman’s corporates ended the year with overall positive earnings growth of 18%. Commodities and financial service were its top performing sectors.

UAE achieved an earnings growth of 15% (FY13 vs FY12) supported by good performance in its real estate and Conglomerates which grew at a rate of 72% and 70% respectively (FY13 vs FY12). 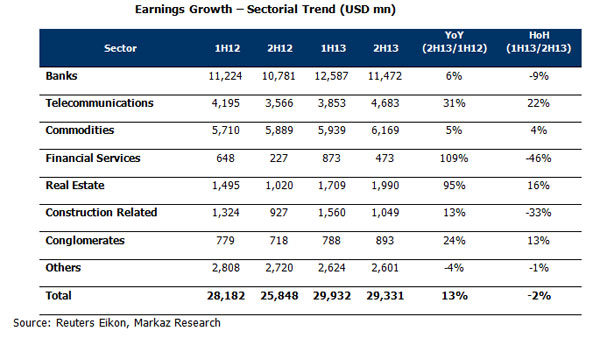 Based on the current trend, we expect a strong earnings growth of 12% during the year 2014. We believe that local developments in the GCC region play a vital role in stock markets in the region. Improving economic prospects in the developed economy such as US and the Eurozone  is expected to increase volume of exports across the region. Economic activities in anticipation of the Dubai Expo 2020 and Fifa World cup 2022 are expected to be positive for the real estate and construction related sectors.