When looking at the top 20 companies listed in the GCC stock markets (measured by market capitalization), certain themes emerge:

However, the muted market performance during the last few years has seen them not deliver positive shareholder value. Measured in the short-term (last one year), only 3 of the 20 managed to beat their stock market index in terms of performance.

As a group, they share a medium to high risk profile measured in terms of standard deviation (ranging from 20% to 54%). Other key risk metrics like average monthly returns, monthly high/low, losing streaks, and drawdown also point to similar trend of medium to high risk. Hence, they would tend to exhibit more of the characteristics of a value stock than a growth stock.

How are they correlated?

Given the lack of market integration, the correlation looks mostly spurious. Otherwise how can you explain the highest positive correlation (95%) between Qatar National Bank and Saudi Arabian Fertilizer Co or highest negative correlation (-71%) between Saudi Telecom and Etihad Etisalat (both Saudi-based telecom companies). Hence, basing portfolio allocations on correlation may be misleading until markets integrate.

Value Traded for the group amounted to USD 59bn as of September 2011, though USD 31bn (53%) of that was accounted for by Sabic followed by Al Rajhi with 8% of total value traded. The average turnover velocity for the group during the period was roughly 12%, relatively low given the high degree of government and institution holding of Large Caps in addition to the overall decline in trading across the region.

The group has an average Dividend Yield of just over 5%, the highest yields coming from the Chemicals and Telecom sectors. Average RoE and RoA came in at 18.6% and 8%, respectively, during the period. 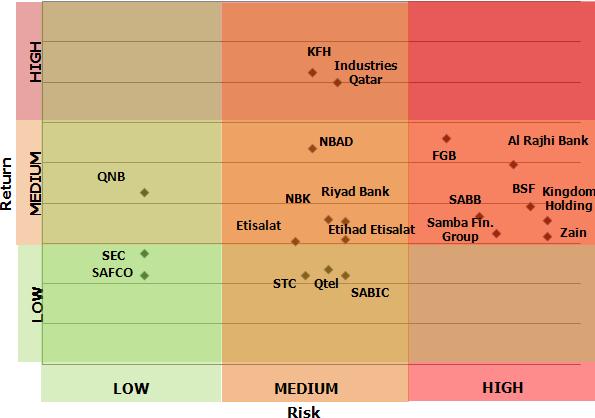 In terms of Expected Risk and Return for the coming year, some patterns emerged:

Kuwait Financial Centre S.A.K. 'Markaz', established in 1974 with total assets under management of over KD 872 million as of September 30th, 2011, is the leading and award winning asset management and investment banking institution in the Arabian Gulf Region. Markaz is listed on the Kuwait Stock Exchange (KSE) since 1997 under ticker Markaz.