Markaz”, in its recent research report titled "GCC Bonds & Sukuk Market Survey" has highlighted the trends pertaining to bonds and sukuk issuances in the GCC region during 2016.

The report stated that the aggregate primary issuance of bonds and sukuk by GCC entities, including Central Banks Local Issuances, GCC Sovereign and Corporate Issuances, totaled USD167.540 billion in 2016, a 41.20% increase from the total amount raised in 2015. A substantial increase in activities can be mainly attributable to sovereign issues by GCC governments as a response to plug the budget deficits due to persistently low oil prices. Saudi Arabia was the lead issuer in the GCC during 2016.

The GCC Bonds and Sukuk market is composed of bonds and sukuk issued by GCC Sovereign, corporate entities and financial institutions, for financing purposes in local and foreign currencies. A total of USD102.436 billion was raised in the GCC bonds market in 2016, a growth of 57.22% from USD65.155 billion raised in 2015.

Geographical Allocation: Saudi Arabia was the leading issuer in 2016, raising USD45.137 billion through 18 issues and representing 44.06% of the total value raised by the GCC issuers during the year.

Sovereign Vs. Corporate: Sovereign issues dominated the GCC bonds and Sukuk market in 2016 as their contribution to the overall market increased to 64.3% in 2016 with total value of USD65.823 billion as compared to 58.3% in 2015. Saudi Arabia raised SAR97 billion (USD25.854 billion) in domestic markets and USD17.5 billion in international debt markets.  Saudi Arabia raised USD 17.5 billion through its debut international bonds issued in October 2016, the largest debt issue recorded by an emerging economy, in addition to SAR97 billion (USD25.854 billion) through Government developments bonds issued quarterly in the domestic currency. Qatar issued USD9 billion sovereign bonds with 5, 10 years and 30 years maturities. Abu Dhabi issued USD5 billion bonds with maturities of 5 years and 10 years. Kingdom of Bahrain raised USD2.60 billion through a 12yr and a 7yr bonds and Oman issued USD4 billion bonds with maturities of 5 years and 10 years and USD0.5 billion through a sukuk maturing in 6 years.

Conventional Vs. Sukuk: Conventional issuances raised USD89.799 billion, or 87.66% of the total amount raised in GCC bonds and sukuk market during 2016.

Sector Allocation: Government sector accounted for the largest amount raised during the year, with USD67.023 billion representing 65.4% of the total amount raised as compared to USD37.958 billion issued in 2015. The Financial sector followed with USD24.910 billion (24.32%) raised through 259 issues.

Maturity Profile: Issuances with tenures of five to less than ten years raised the highest amount, USD58.70 billion, through 80 issuances, representing 57.3% of the total amount raised. As maturity tenor of 10 years and above gained considerable traction in 2016 among sovereign issuers a total of USD31.802 billion (30.925% of the total value) was raised through 33 issues with tenor of greater than or equal to 10 years, including 6 perpetual issues raising USD1.426 billion.

Issue Size Profile: GCC bonds and sukuk issuances during 2016 had issue sizes ranging from USD2.4 million to USD6.5 billion. Issuances with principle amounts greater than or equal to USD1.0 billion raised the largest amount of USD68.004 billion, representing 66.387% of the total value.

Rating: During 2016, a total of 164 issuances, 53.1% of the total Sovereign and Corporate issuances, were rated by either one or more of the following rating agencies: Moody’s, Standard & Poor’s, Fitch, and Capital Intelligence out of which 153 issuances had investable grade ratings. 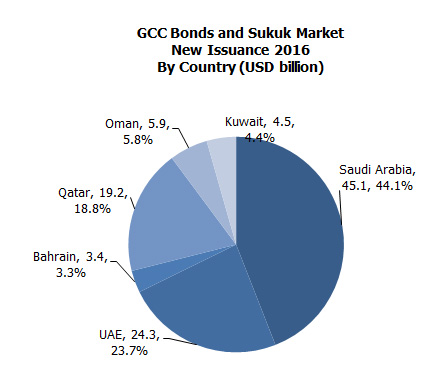 Kuwait Financial Centre K.P.S.C “Markaz”, established in 1974, is one of the leading asset management and investment banking institutions in the Arabian Gulf Region with total assets under management (AUM) of over KD935 million as of December 31, 2016 (US3.05 billion). Markaz shares are listed on Boursa Kuwait since 1997.