The financial crisis has very much spilled over into the real sector with most of the developed and emerging countries recording a negative growth in industrial production. This scenario of a collapse in the global growth is all set to impact Sabic’s earnings negatively says a recent company research note released by Kuwait Financial Centre S.A.K “Markaz”. The authors of the report M.R.Raghu, Senior Vice President – Research and Amrith Mukkamala, Senior Analyst – Research, point out that the industrial production figures, which is a good source for ascertaining the macro picture for the global economy and an indicator which has a direct impact on commodity demand, seems to be cooling off significantly. The report states that the recent month’s data when compared on a YoY basis shows the extent of decline. All the developed countries especially that of Japan, Italy and the US posted a -30%, -14% and -10% declines in industrial production figures for Jan 09 on a YoY basis. The emerging markets too have joined this trend; both China and India have posted a 8% decline in industrial production. China had been posting a positive growth till August 2008.

The report states that Sabic, sources majority of its demand from across the globe especially from Asia (Ex-Japan). The state of the global economy and the resulting commodity prices has a significant bearing on the profitability of Sabic. Almost all the commodity prices in the past have been mainly driven by increasing China’s imports. The China’s official data till October 2008 points out to a healthy growth of 16% in imports on a YoY basis. However, post this period, the imports growth turned negative. For the latest data period for February 2009, the China’s imports have fallen by 24% on a YoY basis. The authors state that the China’s imports data and ethylene growth data on a YoY basis have a strong relationship.

Ethylene prices which have a significant bearing on Sabic’s profitability witnessed a decline of 49% in February 2009 on a YoY basis.

Looking ahead the report points out that, China’s power consumption, which is a lead indicator for the overall industrial production in China, has also started recording negative growth. The China’s power consumption witnessed a decline of close to 4% in both January and February 2009 as compared on a YoY basis. This is expected to lead to further declines in industrial production activity and thereby reducing the imports of commodities even further.

The prices of petrochemical commodities, fertilizers and steel in which Sabic has a presence witnessed a reversal in 2008 after posting a new peak. The report states that, Ethylene prices peaked out in July at USD 1825 per MT, which is a gain of 30% from end 2007 prices. By the end of 2008, Ethylene prices were at USD 550 per MT, a 71% decline from July levels. The scenario was similar with the case of Steel, where in the CRU Global Steel Index peaked out in July 2008 and by the end of the year 2008, the index was down by 50%. Ammonia and Urea prices peaked out in August   2008 .

The authors point out that high volatility witnessed in commodity prices and the downward pressure on prices has resulted in trimming production lines across the globe by all the major chemical manufacturers. Press reports suggest that Sabic has permanently shut down its aromatics plant in the U.K. and has temporarily closed its plastics plant in Spain. BASF has reduced its capacity utilization at six sites worldwide in mid-November. On average, the capacity utilization rate within the BASF Group is currently less than 75%. Dow Chemical has announced closure of 20 plants permanently and announced a temporary shutdown of another 180 units. The plants being idled are expected to represent 30% of Dow’s global production capacity.

In spite of these production cuts the report states that ethylene supply in the markets is estimated to be high. The expansionary projects and new projects coming up in the Middle East is expected to result in an additional 9Mn Mt ethylene and 4Mn Mt of propylene between 2009-2012. Even though, these might face time delays as it has already been in the case with the 1.3 Mn Mt Yansab ethylene plant and 1.2Mn Mt Sharq Ethylene plant both from Sabic and supposed to be commissioned by 2Q08 and 4Q08 respectively, it is estimated that the current supply is outstripping demand.

For Sabic, the authors expect a base case scenario of a 17% decline in production of petrochemicals for 2009. This is taking into consideration a lower operating rate of 75%.

The authors point out that, the fall in prices in the second half of 2008 resulted in significant margin contraction across the industry. The Platts European Petrochemical Cracker Margin (PCM) index, a measure of profitability for European ethylene producers against the cost of naphtha as a feedstock, cracking margins was seen below the critical breakeven level of $200/mt during the first three quarters of 2008. However, with the softening of the crude prices the PCM index is back again in the positive territory.

In the case of Sabic, due to the natural gas feed stock advantage and also due to the long term agreement with Saudi Aramco at USD 0.75 per MMBTU the margins have been comparatively healthy. However, the gross margins have declined to historic low levels due to product price erosion.

The report states that the petrochemical segment provides to 73% of the gross profit for Sabic and witnessed its margins shrink to historic lows of 19% in 2008 from 26% and 43% in 2007 and 2006 respectively. The consolidated gross margins of Sabic witnessed an 8% contraction to 30%.

The authors feel that the damage would have been worse if not for the cushioning impact by a lower fall in margins in the fertilizer segment and the metals segment, however, their combined contribution to the overall gross profit is only 27%. Also, with the benefit of hindsight, steel prices which have witnessed a significant decline can be expected to impact the gross margins negatively going forward, say the authors of the report.

In its base scenario the report expects 2009 Gross profit per tone to witness a decline of 15%.

Labor and other operational costs

The report indicates that major chemical producers across the globe have announced or planning for massive layoffs. Sabic has already cut 45 employees in SABIC Innovative Plastics (SIP) unit in Mississippi and the press releases are pointing towards a total cut of 100 – 125 employees in SIP alone. The report also points out that other major chemical manufacturers have announced even more drastic cuts in their work force. Dow Chemical recently announced the elimination of 11,000 jobs globally due to shut down of 20 plants permanently and temporarily shut down further 180 units. As a base case scenario the report expects Sabic’s other operational costs to decline by 10% in 2009.

Due to the reduction in operating rates, a forecasted decline in margins and a beneficial minor impact due to reduction in costs, the authors expect a most probable scenario with a net profit post minority interests at USD 4.22 Bn for 2009, which will be a 28% decline as compared to 2008 profits. In 2008, Sabic posted a 19% decline in profits on a YoY basis to USD 5.87 Bn. The net profit margins are expected to squeeze further in 2009 as compared to 2008’s net profit margin of 15%. 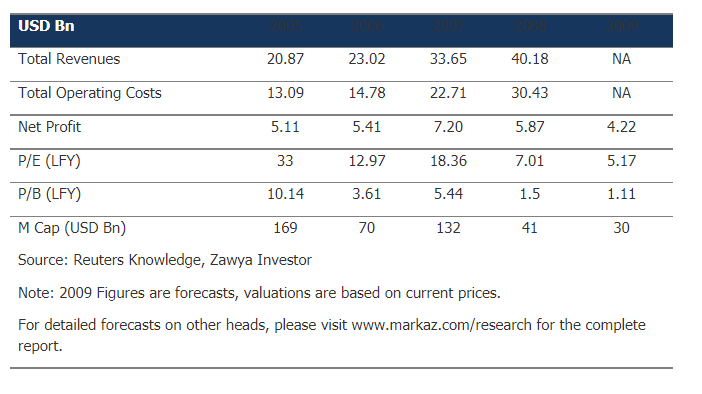 The balance sheet strength, the authors believe is at the current context a significant positive for Sabic. The report points out that, the leverage levels at the total debt level is at 90% of equity and the interest coverage ratio in 2008 was strong at 10x. The authors expect the interest coverage ratio to decline to 7x in their base case scenario, mainly due to a base case scenario decline in EBITA by about 32%. The authors point out that 7x cover is still a strong positive.

Also, the reports points out that the debt schedule of Sabic reveals that majority of the debt is floating and pegged to either SIBOR or LIBOR. The authors say that both these rates have declined to large extent, Libor 1Y USD rates are currently at 2.205% which is 52 % lesser than that at the end of 2007 and 29% lesser than the average rate in 2008. Also, on a comparative basis, Sabic’s leverage ratio does not look stretched at the end of 2008. Due to the decline in interest rates, on a base case scenario, the authors expect 2008 interest costs to decline by 12%.

The report points out that Sabic’s stock has already witnessed  69% price erosion in 2008 as compared to 2007 end prices coupled with a 27% decline in the YTD period in 2009 as compared to 2008 end prices. At the current prices, the authors believe that the stock is discounting the 2008 earnings by 5.11x and 2009 earnings by 7.05 xs. The report points out that the PE compression has also been significant. At the start of 2008, the stock was trading at a PE of 16x.

The volatility (as measured by a proprietary model termed as “MVX”, short for “Markaz Volatility Index”) seems to have cooled off as compared to the spike witnessed at the end of 2008. However, the authors point out that current volatility level as indicated by MVX is higher than the levels seen in 2008 indicating that the price performance may continue to be stressed.

Kuwait Financial Centre 'Markaz', with total assets under management of over KD1. 12 billion as of September 30, 2008, was established in 1974 has become one of the leading asset management and investment banking institutions in the Arabian Gulf Region. Markaz was listed on the Kuwait Stock Exchange (KSE) in 1997; and was recently awarded a BBB+ corporate rating by Capital Intelligence Ltd.