Kuwait Financial Centre “Markaz” recently released its Monthly Markets Review report for the month of July 2020. Markaz report stated that, most GCC equity markets extended their positive run for the fourth consecutive month in July, aided by easing of lockdown restrictions and the rise in oil prices. Global markets were buoyant as central banks continue to flood the markets with liquidity.

Kuwait markets were negative, with the Kuwait All Share index registering a decline of 3.2% in July. There were further delays in passing the country’s debt law, which is key for funding Kuwait’s deficit. The public debt law which would allow it to borrow KD 20 billion over 30 years is still under discussion in the parliament. S&P has downgraded Kuwait’s outlook from stable to negative citing that the country’s General Reserve Fund might not be sufficient to cover its deficit in 2020. The agency estimates this year’s deficit to be at 40% of GDP. The earnings numbers released so far also added to the negative sentiment. During H1 2020, National Bank of Kuwait’s net profit has declined by 46.9% y-o-y and Zain has reported a 14% y-o-y decline. Among sectors, healthcare index was the top gainer, rising 2.2% while Basic materials index saw the biggest decline, down 6.7% for the month.

Regionally, the S&P GCC composite index gained 1.7%, with all markets barring Kuwait and Dubai staying in the green. Qatar gained 4.1% in July followed by Saudi Arabia and Oman markets which gained 3.3% and 1.5% respectively. OPEC+ agreement to cut production by 7.7 million barrels a day from August encouraged GCC investors. According to S&P, Dubai’s GDP is set to shrink by 11% in 2020. Moody’s has opined that rentals and home sales are set to decline in UAE, particularly in Dubai, over next 12-18 months. Saudi Arabia has posted a deficit of USD 29.12 billion in the Q2 2020. Oil revenues fell by 45% y-o-y and total revenues had dropped 49%. In the backdrop of Saudi Arabia’s tripling of VAT from 1st July 2020, IMF has opined that it might not be the right time to hike or introduce new taxes in GCC.

The performance of Global equity markets was positive, driven by influx of liquidity by central banks and the EU leaders’ agreement over the coronavirus recovery deal with the MSCI World Index gaining 4.7% in July. U.S. (S&P 500) gained 5.5% in July and erased its losses on a year-to-date basis. The gains were supported by reports of growth in earnings from tech giants even as the surge in cases threaten setbacks in reopening of the economy. The UK (FTSE 100) markets lost 4.4% for the month. Emerging markets witnessed strong buying, rising 8.4% for the month.

Oil prices closed at USD 43.3 per barrel at the end of July 2020. This translates to a monthly gain of 5.2%, on the back of production cuts and easing of lockdowns. OPEC+’s compliance to the agreed oil output cuts was at 107% in June. According to EIA, U.S. crude oil production plummeted by a record 2 million bpd in May. Gold prices continued to rise, increasing 10.9% in July. 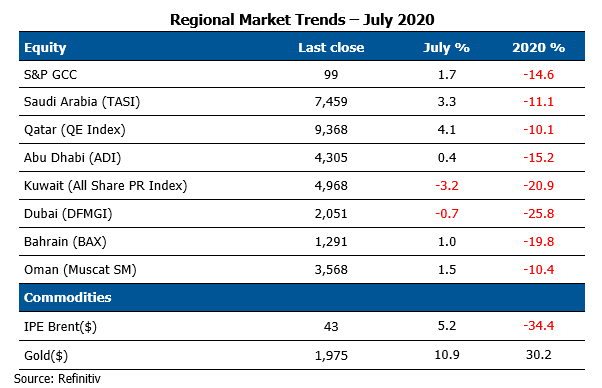