Markaz: Kuwait's petrochemical sector is poised for growth thanks to growing global demand

The Kuwait Financial Center ("Markaz") recently issued its report on the petrochemical sector in Kuwait, in which it addressed the situation of the sector and shed light on the factors that stimulate growth, the opportunities available in it, and the main challenges facing it. The report also presented an overview of the most important companies operating in the sector and included a comparison with the petrochemical sectors in other GCC countries.

Markaz's report indicates that the growth of the Kuwaiti petrochemical sector started from humble beginnings in 1963, supported by government investments and the boom in the hydrocarbon production sector. The Petrochemical Industries Company was established to become the only company operating in the petrochemical sector under the supervision of the Kuwait Petroleum Corporation, while all other companies operating in this sector are classified either as subsidiaries or joint ventures with it.

PIC follows the "2002-2020 strategy" to develop the petrochemical sector in the State of Kuwait. The strategic vision of the company is to develop large integrated plants and refineries for petrochemicals in Kuwait as well as other major markets such as India and China through its joint ventures.

In 2010, the Kuwaiti government began implementing a law that allows 100% foreign direct investment, and it is expected that this will attract foreign investors and encourage private sector companies to enter the petrochemical sector, which is funded so far mainly by the Kuwaiti government.

The list of major projects that PIC is currently working on includes the Olefins-3 plant in the Shuaiba Industrial Area in Kuwait, which is valued at $7 billion and is expected to be operational in 2015. PIC and SINOPEC are also working on Construction of an integrated refinery in Guangdong Province of China, which is expected to start operation in 2017, and this refinery will contribute to helping the company take advantage of the huge petrochemical market in China. It is also expected that petrochemical projects will be implemented in Kuwait over the period from 2011 to 2017, with an estimated value of $7.565 billion.

The Kuwaiti petrochemical sector had faced problems in the past as a result of the decline in global demand over the years 2008 and 2009 during the global financial crisis. However, the demand for petrochemicals returned to recover after 2010 with the increase in economic growth rates, especially in emerging Asian markets such as India and China. 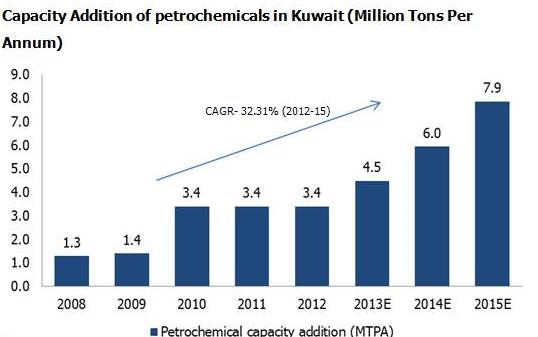 China and India are also experiencing rapid urbanization today, and the population of cities in these countries is expected to increase by 50% by 2020 compared to 2010. This will lead to a rapid increase in the demand for products such as plastics and polymers. The reports of the Gulf Petrochemicals and Chemicals Association indicate that Kuwait decided, in light of the expectations of increasing demand, to raise its production capacity in the petrochemical sector from 3.4 million metric tons in 2012 to 7.9 million metric tons in 2015, a compound annual growth rate of 32% during the mentioned three-year period. .

The production of petrochemicals in the Gulf region mainly depends on the supply of ethane at relatively low prices. Ethane is the preferred material due to its obvious cost advantage, with GCC countries supplying ethane at US$0.75 per million British thermal units compared to at least US$3.20 per million British thermal units in both Europe and America. Switching to naphtha-based plants in the GCC will result in producers losing a cost advantage as they will be obligated to get naphtha at market price, and naphtha prices are very volatile.

Expansion of investments in refineries and petrochemicals, income in more joint ventures, and diversification of the product portfolio will help PIC face challenges and achieve its goals.

Thter "Markaz"e Kuwait Financial Center (KSC) "Markaz" was established in 1974 to become one of the reputable financial institutions in the Arab Gulf region in the fields of asset management and investment banking. The center now manages total assets of 1.08 billion Kuwaiti dinars as of June 30, 2014 (US$3.82 billion). Markaz was listed on the Kuwait Stock Exchange in 1997.