Kuwait Financial Centre “Markaz” recently released its Monthly Markets Review report for the month of February 2020. Markaz report stated that Kuwait and other GCC markets were affected by jittery investor sentiments surrounding the spread of Novel Coronavirus despite posting strong corporate earnings for the full year 2019.

Kuwait All Share index registered a loss, decreasing by 4.0% in February. Among Kuwait’s Blue Chip companies, Kuwait Finance House (KFH), Zain and Boubyan Bank came out with strong results during the month for the full year 2019. All three companies witnessed double-digit growth in their yearly net profits for the second consecutive year, growing by 10.6%, 10.4% and 11.7% respectively in 2019. Despite the positive earnings momentum, widespread global investor panic has affected market sentiment, due to which Kuwait markets witnessed a fall. Kuwait’s oil and gas sector was the best performer in February, with the sector index rising by 1.1% while the Technology sector was the top loser, falling by 9.5%. Of the 13 sectors, 10 sectors have registered losses.

Regionally, the S&P GCC composite index declined by 7.4% for the month, with all markets except Bahrain and Oman posting losses. Qatar registered highest loss, declining by 9.1%. With a supply glut in liquefied natural gas pushing prices down, Qatar has delayed partnerships for its natural gas expansion plans. Saudi Arabia ended the month in negative territory, losing 7.5%. There is wide consensus on decrease in oil demand and multiple agencies have revised down their oil demand forecasts. Oman was the top performer in February, gaining 1.3%, followed by Bahrain, which gained 0.2%. S&P has cautioned that if coronavirus outbreak is not contained in the first quarter, GCC economies would be particularly affected as China contributes about 4% to 45% of the countries’ exports.

Markaz report also stated that among the GCC Blue Chip companies, DP World was the top gainer for the month with its stock price rising by 16.1%. The company has announced its delisting from Nasdaq Dubai with each share to be bought back at USD 16.75 per share.

The performance of Global equity markets was negative with the MSCI World Index losing 8.6% for the month. U.S. equities (S&P 500) fell by 8.4% in February. While U.S corporate earnings were better than the expectations, concerns over spread of coronavirus have pushed the markets down. Terming the virus as a health emergency, IMF has cut global economic growth to 3.2% from the earlier 3.3%. The UK market (FTSE 100 index) closed 9.7% lower during February. Britain’s economy showed no growth in Q4 2019 compared to Q3. It recorded an annual growth rate of 1.4% for 2019. Emerging markets ended the month in negative, with the MSCI EM posting monthly loss of 5.3%.

Oil prices closed at USD 50.5 per barrel at the end of February 2020, which is 13.1% lower than January 2020. As coronavirus spreads further, and the number of infected cases and deaths continue to increase, its effect on global economy is becoming more worrisome. This has put a downward pressure on oil prices. World Economic Forum has cited decrease in oil demand as one of the biggest economic effects of the coronavirus outbreak. IEA, OPEC and EIA revised their earlier demand forecast downwards.  Decrease in Libya’s oil production to less than 300,000 bpd last week, from over 1 million bpd following a blockade of its main oil export terminals and current OPEC+ production cuts are rendering some support to the prices. While equities and oil continued to decline, gold, as a safe haven asset gained earlier this month. However, due to profit booking, it fell on the last day of the month, posting a monthly loss of 0.3%. 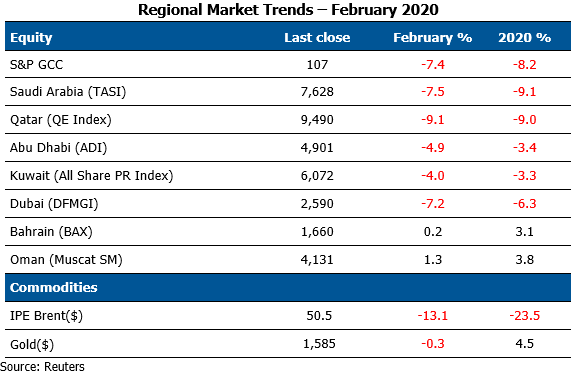