Markaz: Global and GCC markets recover Corona losses on the back of Economic and Financial Stimulus

Markaz report stated that Kuwait All Share Index registered gains of 3.2% in April. MSCI has postponed Kuwait’s inclusion to its Emerging Markets Index from May to November 2020 due to the coronavirus outbreak. Fitch Ratings has affirmed Kuwait’s long-term foreign-currency issuer default rating at 'AA' with a stable outlook, citing the country’s strong fiscal and external balance sheets. IMF has estimated Kuwait’s GDP to fall by 1.1% in 2020. Among Kuwait’s Blue Chip companies, Agility Public Warehousing gained the most at 13.0%. Central Bank of Kuwait has announced a slew of measures during the month to support the economy. The measures include reducing banks’ capital adequacy requirements, easing the risk weighting for SMEs, increase in maximum lending limit etc. Banking sector index was up by 2.0% for the month. Listing of Boursa Kuwait’s shares and KFH-AUB merger process have been postponed citing coronavirus outbreak. While Consumer goods sector was the top gainer at 16.9%, Insurance sector was the top loser, falling by 1.8%.

Regionally, the S&P GCC composite index increased by 8.6% for the month, with all markets except Bahrain posting gains. Optimism over OPEC+ deal, policy responses and ease of lockdown boosted market sentiments. Dubai registered the highest gain, increasing by 14.4%, followed by Abu Dhabi, which gained 13.3%. UAE announced measures such as doubling of stimulus to USD 70 billion and extension of VAT payment. Dubai Expo has been postponed by a year to October 2021. Saudi Arabia gained 9.3% for the month. Bahrain ended the month in negative territory, losing 3.0%. Saudi Arabia, Qatar and Abu Dhabi have issued sovereign bonds to the tune of USD 24 billion in April. Spending cuts were announced by Saudi Arabia, Dubai, Oman and Bahrain on expectation of lower oil revenue. The countries have also eased lockdown seeking to contain economic fallout. IMF has estimated GCC’s real GDP to contract by 2.7% in 2020.

Markaz report also stated that among the GCC Blue Chip companies, International Holding Company (UAE) had gained the most, increasing by 87.4%. Abu Dhabi Commercial Bank (UAE) has declined by 4.1%.  The bank has an exposure of USD 981 million to the troubled NMC Health.

The performance of Global equity markets was positive with the MSCI World Index gaining 10.8% for the month. U.S. equities (S&P 500) gained by 12.7% in April. The UK market (FTSE 100 index) closed 4.0% higher during April. The markets gained on the back of stimulus measures to cushion coronavirus’ impact and news of easing of lockdown.  However, the economic data looks dire with U.S unemployment rate for April expected to reach 16% and its GDP for Q2 2020 expected to fall by 30-40%. Emerging markets ended the month in positive, with the MSCI EM posting monthly gain of 9.0%.

Oil prices closed at USD 25.0 per barrel at the end of April 2020, which is 11.1% higher than March 2020. Earlier this month, OPEC+ agreed to cut crude oil production by 9.7 million barrels per day. The momentum towards achieving a deal helped push prices up, to about USD 34.0 per barrel. However, the markets started falling back as the scupply cuts were perceived to be lesser compared to the reduction in demand. WTI Crude oil futures expiring in May touched USD -40.0 per barrel towards contract expiry because of concerns over storages nearing their full capacity in the face of steep fall in demand. Oil ended the month in positive territory supported by announcement of production cuts, U.S crude glut growing at a slower rate than expected and news of easing lockdown. Gold has gained 6.9% over the month. 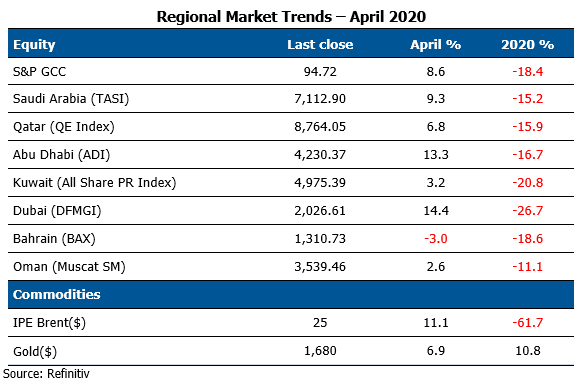