Kuwait’s All Share Index fell for the second straight month, down by 4.4% during September, suffering from the profit booking after the MSCI EM index inclusion announcement in July. All of Kuwait’s blue chip companies registered a loss during September; however, their year-to-date (YTD) gains remain positive. Kuwait Finance House and Zain were the top losers among the blue chips, falling by 9.8% and 4.8% respectively. While majority of the sectoral indices in Kuwait posted a monthly decline, insurance index increased by 3.2% to become the top performing index for the month. Technology sector was the worst performer for the month, declining by 11.2%. On a YTD basis, the banking sector leads the charts with gains of 19.5% whereas the technology sector is down by 34.3% making it the worst performing sector so far in 2019.

Regionally, the S&P GCC composite index fell by 0.7% for the month, dragged down by volatile oil prices and negative performance in Kuwait markets. Among the positive performers, Saudi Arabia, Oman, Dubai and Qatar increased by 0.9%, 0.3%, 0.8% and 1.3% respectively. Bahrain and Abu Dhabi decreased by 1.1% and 2.1% respectively. Qatar was therefore the best performing GCC market.

Markaz report stated that among the GCC Blue Chip companies, Emirates NBD was the top gainer for the month with a rise of 12.1%. Kuwait Finance House was the top loser, declining by 9.8%. Saudi Basic Industries Corporation (SABIC), the largest company by market cap among GCC countries also declined by 7.9% bringing its year-to-date loss to -20.8%, making it the worst performing blue chip company in 2019. Mesaieed Petrochemical Holding Co on the other hand increased by 4.9% in September making it the most profitable blue chip company among its GCC peers in 2019, with yearly gains surging by 98.3%

Oil witnessed one of the most volatile months in decades after the attack on Saudi Aramco oil refineries intensified concerns about growing instability in the world’s most important crude-producing region. Brent futures leaped a record USD 12 per barrel. on 16 September, before settling just above USD 69 per barrel registering the biggest one-day percentage gain since the start of the contract in 1988. Prices have since reverted back as the government of Saudi Arabia has reacted promptly and restored production capacity at pre-attack levels within 10 days of the attack. Brent crude ended the month of September, up by 0.5%. Gold has decreased by 3.1% in September as easing of concerns of an escalation in the U.S.-China trade war took some shine off the safe-haven. Gold has witnessed a rally of 14.8% so far in 2019. 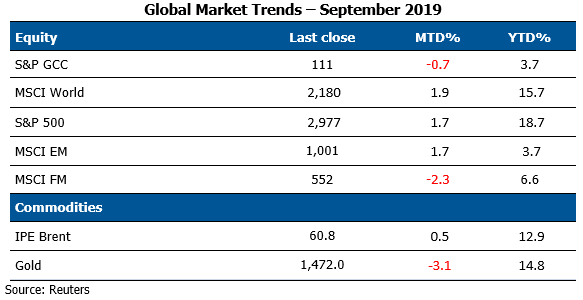