Kuwait Financial Centre “Markaz” recently released its Monthly Markets Review report for the month of January 2020. Markaz report stated that the GCC markets ended the month in negative territory weighed down by losses in Saudi Arabian markets. Other GCC markets posted mild gains. Gloom over the outbreak of coronavirus in China, its subsequent impact on global growth and geopolitical tensions in early January have contributed to weak investor sentiments.

Kuwait All Share index registered mild gains, increasing by 0.7% in January. Among Kuwait’s Blue Chip companies, Agility Public Warehousing and Kuwait Finance House (KFH) were the top gainers with monthly gains of 3.9% and 3.2% respectively. KFH has come out with strong earnings numbers, reporting 10.4% year-on-year increase in profit for the full year 2019.  Kuwait’s oil and gas sector was the best performer in January, with the sector index rising by 4.4% while the Technology sector was the top loser, falling by 3.8%.

Regionally, the S&P GCC composite index declined by 0.9% for the month with losses in Saudi Arabian markets offsetting mild gains in others. Saudi Arabia ended the month in negative territory, losing 1.7%. Declining oil prices have affected Saudi markets, with Saudi Aramco falling by 3.1% for the month. Bahrain was the top performer in January, gaining 2.9%, followed by Oman and Abu Dhabi which gained 2.5 % and 1.6% respectively.

Markaz report also stated that among the GCC Blue Chip companies, Qatar Islamic Bank was the top gainer for the month with its stock price rising by 8.9%, supported by strong earnings, with its net profit for 2019 up by 11% on 2018. DP World ranked second among gainers posting a 6.9% increase.

The performance of Global equity markets was mildly negative with the MSCI World Index losing 0.7% for the month. U.S. equities (S&P 500) fell by 0.2% in January. Though increase in non-farm payrolls, sealing of U.S-China trade deal, revival in U.S housing market and good corporate earnings numbers were positives for the month, markets fell due to worries over the spread of coronavirus and the now de-escalated U.S-Iran tensions. The UK market (FTSE 100 index) closed 3.4% lower during January. With the ratification of the Brexit Bill, Britain has formally left the European Union (EU) on 31st January 2020 and would be in transition period for the following 11 months, after which it would completely exit EU. Though the markets reacted positively to the development, weak U.K retail sales numbers and virus outbreak have contributed to the decline. Emerging markets ended the month in negative, with the MSCI EM posting monthly loss of 4.7%. China, being the epicenter of the coronavirus breakout that is rattling global markets, lost 2.4% in January.

Oil prices closed at USD 58.2 per barrel at the end of January 2020, which is 11.9% lower than December 2019. The coronavirus outbreak in China has raised concerns over oil demand from the second largest importer of Oil, leading to a freefall in oil prices close to the end of January. Oil markets have remained volatile throughout the month, with the U.S - Iran confrontation in early January driving the prices up to USD 68.7 per barrel. De-escalation of the issue and weak Chinese economic growth numbers dragged down oil price during the month, in spite of optimism that emerged from the signing of an interim trade deal between the U.S. and China. These uncertainties have led to investors moving towards safer assets, due to which gold prices increased by 4.8% for the month. 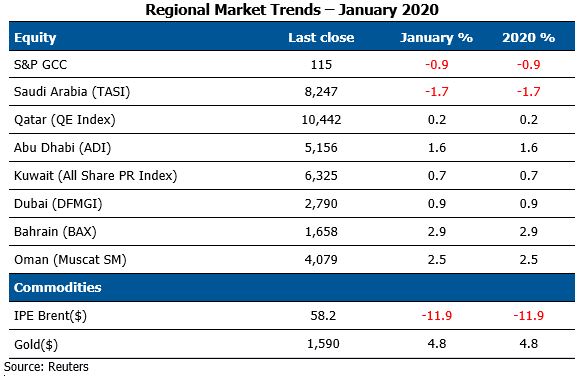