Markaz: Facebook is the most widely used social media tool in the GCC including Kuwait

Kuwait Financial Centre “Markaz” recently published its report on GCC social media. In this report, Markaz examines the trends in usage and penetration of Facebook, LinkedIn and Twitter in the GCC countries. The report highlights the growth drivers, opportunities and key challenges for the sector. It also explores the impact of social media on governance and business, and the current regulations that affect the use of social media.

Among GCC countries, Saudi Arabia and UAE are the frontrunners in social media adoption. Currently, Facebook is the most widely used social media tool in the GCC, with over 16 million users (Apr 2014) in the region. Twitter and LinkedIn also have significant user base in GCC, with around 3 million users for each of platform. 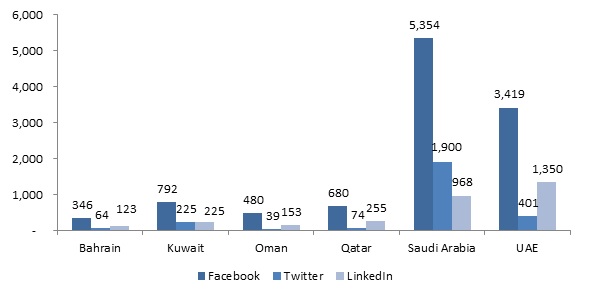 Businesses in GCC are becoming more aware of social media marketing and are using these platforms to reach out to existing and potential customers. In Saudi Arabia, online entertainment has tasted success on YouTube, and major players in various industries, such as Dubai Islamic Bank and Saudi Telecom Company, actively use social media for their business, and have done significantly well to utilize its many benefits.

The government bodies in the GCC region are also adopting social media to communicate with their citizens, and to advertise events and / or services. Many prominent officials of the GCC government are highly active on social media, and regularly interact with the public.

In GCC, the government and corporate are taking steps to discuss and find ways to leverage social media benefits. To this end, GCC social media summits were held in Kuwait and Dubai in 2013, and are to be held in 2014 as well, in both the countries. These events bring government officials, business leaders and technical experts on the same platform to discuss tools, trends, governance and policies regarding social media.

Social media comes under the purview of communications and media regulators. The information ministry has regulatory reach in the new mediums, such as internet and social media. Most of the GCC countries have a Telecommunications Regulatory Authority (TRA), which governs the technical aspect of the internet. Web censorship exists in all the GCC countries for certain aspects.  Arrests based on comments and posts on social media platform have been made in all the GCC states in the past. Despite similarities in regulatory characteristics, some GCC countries are more open than others, in this regard.

Arab speakers account for roughly 6 per cent of the world population; whereas only 1.5 per cent of the web pages are in Arabic. This lack of Arabic content challenges the growth of social media in GCC. Data privacy and security remain a global threat to social media growth, and this has been recently highlighted by the “Heart Bleed” bug that was reported in April 2014.

Currently, 67 per cent of total GCC population is under 35 years of age , which is higher than the world average of 58 per cent. This youth population will result in faster adoption and higher usage of social media in the coming years.

The GCC countries already have the highest mobile subscription in world and with internet penetration increasing rapidly at a CAGR of 15 per cent, access to social media is set to grow enormously. Internet bandwidth (kb/s) per Internet user, which had been lagging behind for many years, has begun increasing across the region. Government spending in the ICT sector, for the period 2012–2015 is expected to reach USD 244bn. The heavy spending on ICT infrastructure will result in higher speed mobile internet and further spur the growth of social media.