Kuwait Financial Centre “Markaz”, in its recent research report titled GCC Bonds & Sukuk Market Survey, has highlighted the trends pertaining to bonds and sukuk issuances in the GCC region during 2015.

The aggregate primary issuance of bonds and sukuk by GCC entities, including Central Banks, totaled USD118.653 billion in 2015, a 37.20% increase from the total amount raised in 2014. A large part of the increase is attributable to the Saudi Arabian sovereign issuances, first of such issuances since 2007.

Central Bank Local Issuances are Fixed Income securities issued by GCC central banks in local currencies and with short maturities of less than 1 year for the purpose of regulating levels of domestic liquidity. During 2015, a total of USD53.498 billion was raised by the GCC central banks, namely by the Central Bank of Kuwait, Bahrain, Qatar, and Oman. The Central Bank of Kuwait raised the highest amount with USD23.347 billion, representing 43.64% of the total amount raised by CBLIs through 65 issuances, followed by the Central Bank of Qatar, which raised a total of USD15.119 billion, a reduction of 21.43% from USD19.243 billion raised in 2014.

The GCC Bonds and Sukuk market is composed of bonds and sukuk issued by GCC Sovereign and corporate entities for financing purposes and denominated in local and foreign currencies. A total of USD65.155 billion was raised in the GCC bonds market in 2015, a growth of 82.40% from USD35.720 billion raised in 2014.

Saudi Arabia was the leading issuer in 2015, raising USD35.008 billion through 15 issues and representing 53.73% of the total value raised by the GCC issuers during the year. In terms of the frequency of issuances, UAE maintained its position as the dominant issuer with 149 issuances during 2015. The UAE based issuers raised USD18.519 billion during 2015, representing 28.42% of the total value. Bahraini entities represented 7.15% of the total issuances, raising USD4.656 billion through 7 issues. Qatari entities raised USD2.041 billion while Omani entities raised USD3.766 billion. National Bank of Kuwait was the only issuer from Kuwait. 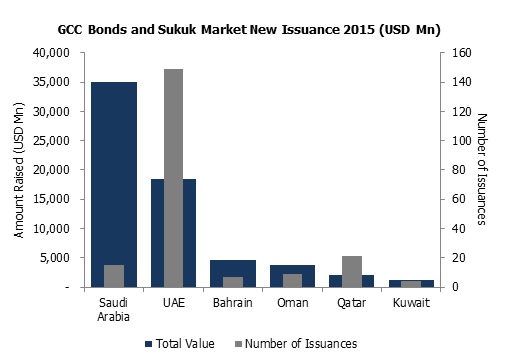 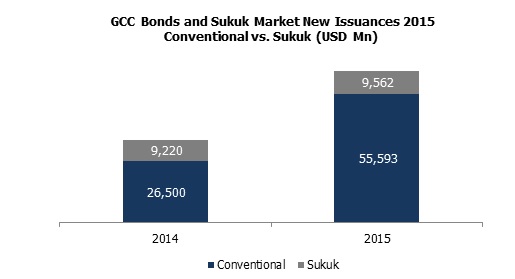 Government sector accounted for the largest amount raised during the year, with USD37.959 billion representing 58.26% of the total amount raised, through 16 issuances. The Financial sector followed with USD22.874 billion (35.11%) raised through 179 issues.

Issuances with tenures of five to ten years raised the highest amount, USD55.55 billion, through 69 issuances, representing 85.3% of the total amount raised. Nine perpetual bonds raised a total of USD3.701 billion (5.7% of the total value).

GCC bonds and sukuk issuances during 2015 had issue sizes ranging from USD4.0 million to USD5.33 billion. Issuances with principle amounts greater than or equal to USD1.0 billion raised the largest amount of USD40.189 billion, representing 61.68% of the total value.

During 2015, a total of 72 issuances, 35.12% of the total Sovereign and Corporate issuances, were rated by either one or more of the following rating agencies: Moody’s, Standard & Poor’s, Fitch, and Capital Intelligence.

Kuwait Financial Centre K.P.S.C “Markaz”, with total assets under management of over KD 1 billion as of December 31, 2015 (USD 3.38 billion), was established in 1974 and has become one of the leading asset management and investment banking institutions in the Arabian Gulf Region. Markaz was listed on the Kuwait Stock Exchange (KSE) in 1997.