June was the most active month in terms of both the amount raised and the number of issuances. A total of USD15.55 billion was raised during the month through 44 issues.

Central Bank Local Issuances are debt securities issued by GCC central banks in local currencies and maturities of less than 1 year, to regulate the levels of domestic liquidity. A total of USD32.14 billion was raised by the central banks of Kuwait, Bahrain, Qatar, and Oman during H1 2014. During H1 2014 CBQ surpassed CBK as the top issuer, in contrast to the previous years, by issuing the largest amount amongst GCC central banks. CBQ raised USD14.29 billion through 25 issues, representing 44.48% of the total CBLI amount. The CBK raised USD13.29 billion through 37 issues, an increase of 7.87% from USD12.32 billion raised through 34 issuances in H1 2013. 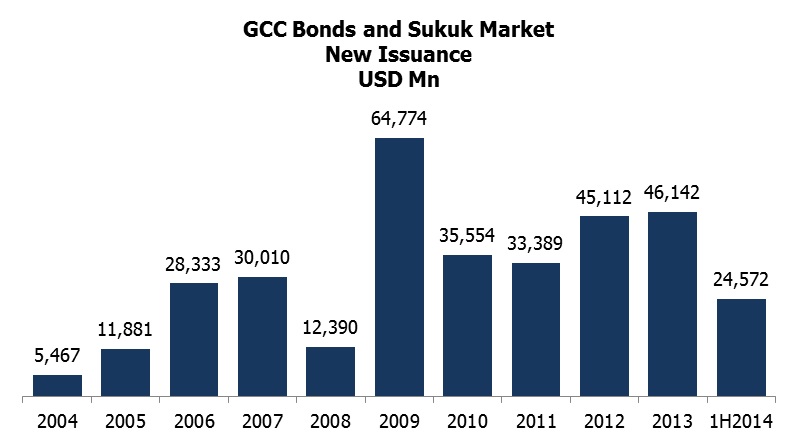 Geographical Allocation: Issuances by UAE entities raised the largest amount in H1 2014 representing 59.88% of the total amount, or USD14.71 billion, and were the most active in terms of issuance frequency with 54 issuances. Saudi Arabian entities raised the second highest amount, USD7.35 billion while Qatari entities raised USD1.18 billion. Kuwait Projects Company (KIPCO) was the sole corporate issuer from Kuwait, raising USD500 million through a conventional bond.

Sovereign Vs. Corporate: During H1 2014, corporate issuances dominated the majority of the amount raised, with USD23.82 billion or 96.95% of the total amount raised. Sovereign issuances raised USD750 million represented by a single issuance from Government of Dubai. 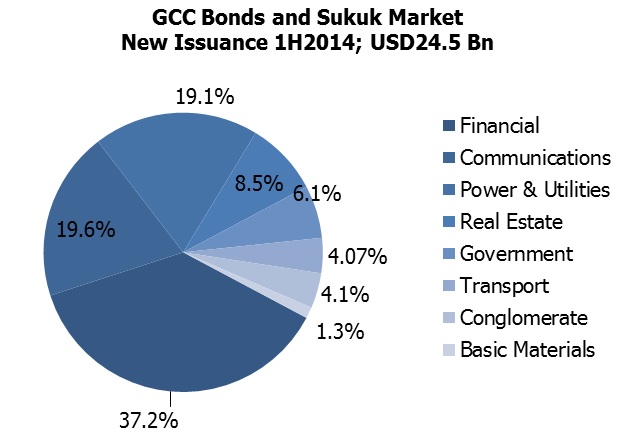 Maturity Profile: Bonds with tenures of ten-years raised the highest amount, USD8.52 billion, through 13 issuances, representing 34.68% of the total amount raised. A total of USD5.08 billion was raised through issues with maturity longer than 10 years, including one perpetual issue by Al Hilal bank which raised USD 500 million and a 40 year issue by Saudi Electricity Company.

Issue Size Profile: GCC bonds and sukuk issuances during H1 2014 had issue sizes ranging from USD2.5 million to USD1.63 billion. Bonds and sukuk with issue sizes greater than or equal to USD500 million but less than USD1.0 billion raised the largest amount of USD10.98 billion, representing 44.71% of the total value.

Rating: During H1 2014, a total of 25 issuances, or 33.8% of the total number of Sovereign and Corporate issuances, were rated by either one or more of the following rating agencies: Moody’s, Standard & Poor’s, Fitch, and Capital Intelligence. 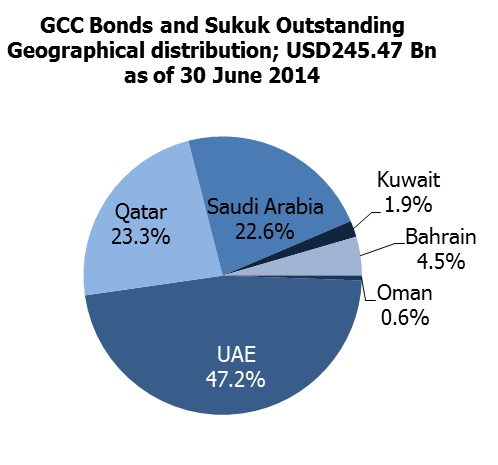 Markaz Fixed Income Fund (“MFIF” or the “Fund”) was established on 31st December 2010. The Fund objective is to provide investors steady returns with reduced risks by investing in high grade, high quality Bonds and Sukuk issued or guaranteed by sovereign, quasi-sovereign institutions and highly rated corporations, in Gulf Cooperation Council (GCC) countries in particular and Middle East and North Africa (MENA) countries to a lesser degree. Since its inception the fund achieved 11.47% return, while the year to date return as of August 31, 2014 is 0.79%.