Markaz:Cost of borrowing from bonds market in GCC countries increased and bond prices dropped in March 2020

Kuwait Financial Centre “Markaz”, in its GCC Fixed Income research report for the first quarter of 2020, has highlighted the implications of the outbreak of COVID-19 on fixed income markets in the region. The report notes that the outbreak of the disease has significantly impacted global financial markets across all asset classes, pushing central banks and policymakers to intervene and provide wide-ranging economic stimulus measures in the face of worsening economic conditions. Within the global fixed income markets, the global pandemic event has resulted in elevated volatility and widened spreads. Aside from the pandemic, global markets witnessed a sharp drop in oil prices during March as well, placing further strain on oil-dependent economies, translatinginto further pressure on regional fixed income markets.

The implications of the pandemic on regional fixed income markets weremanifold. Regional fixed income indices were down for the first quarter of the year, whereas key sectors in the GCC experienced large sell-offs of Bonds and Sukuk and elevated spreads. Primary issuances of Bonds and Sukuk in the GCC witnessed weak activity in March as a result of the uncertainty surrounding the pandemic, leading to a meagre quarter of primary debt issuances in 2020 in comparison with previous quarters. Moreover, Credit Default Swap (CDS) spreads, a measure largely regarded as an indicator of default for sovereign countries, spiked across all GCC countries during March. Finally, the pandemic event and the sharp decline in oil prices pushed credit rating agencies to downgrade both Kuwait and Oman on 31 March, citing deteriorating global economic outlook and falling oil prices.

With few exceptions, all GCC bonds and Sukuk across sectors were negatively impacted as a result of the disruption caused by the coronavirus outbreak and the sharp drop in oil prices, a major source of revenue for the GCC countries. Among these, high yielding bonds and longer maturities witnessed the biggest decline in each sector; however, Consumer (Non-Cyclical), Oil and Gas, Real Estate and low rated Government bonds experienced the brunt of the impact. NMC Healthcare, based in the UAE, experienced the steepest decline in its 2025 bond and saw prices fall by 90.14% in the first quarter of the year as reports of fraudulent financial reporting emerged indicating inflated asset purchases and capital expenditures as well as understated debt.Borr Drilling witnessed the sharpest decline in the Oil and Gas industry as its 2023 bond witnessed a 74.4% decline in valueduring Q1 2020. The Emirates REIT witnessed the sharpest decline year-to-date in the Real Estate Industry as the value of its 2022 bond declined by 33.9%. Among GCC Sovereign bonds, Oman experienced the greatest decline in prices across different maturities as low oil prices are expected to strain the country’s fiscal budget. As of Q1 2020,Oman’s 2027 bond declined by30.36%, 2029 bond declined by 31.07% and 2048 bond declined by 34.51%.

One of the more important implications of the outbreak of COVID-19 and decline in oil prices is the S&P’s downgrade of Kuwait from AA to AA- with a stable outlook and Oman from BB to BB- with a negative outlook. Moreover, Moody’s changed its outlook for both countries from Stable Outlook to Negative Outlook and has placed both countries on review for a potential downgrade. Fitch, however, affirmed Kuwait’s credit rating at AA and maintained a stable outlook for the GCC country. 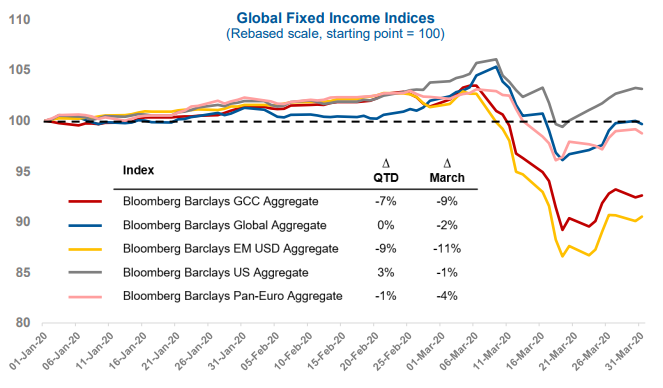 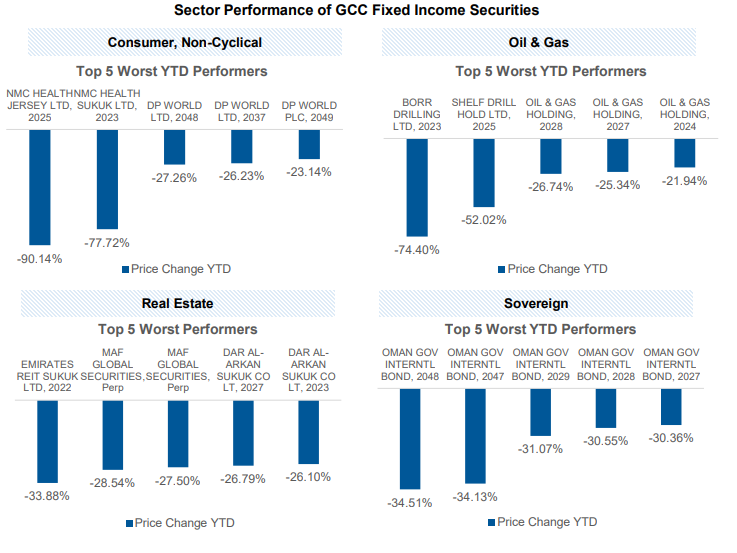 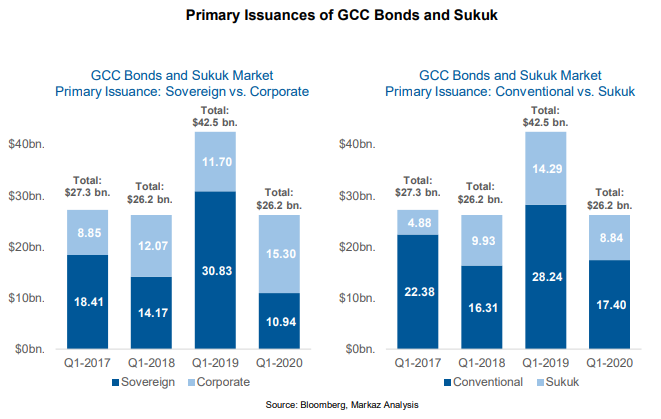 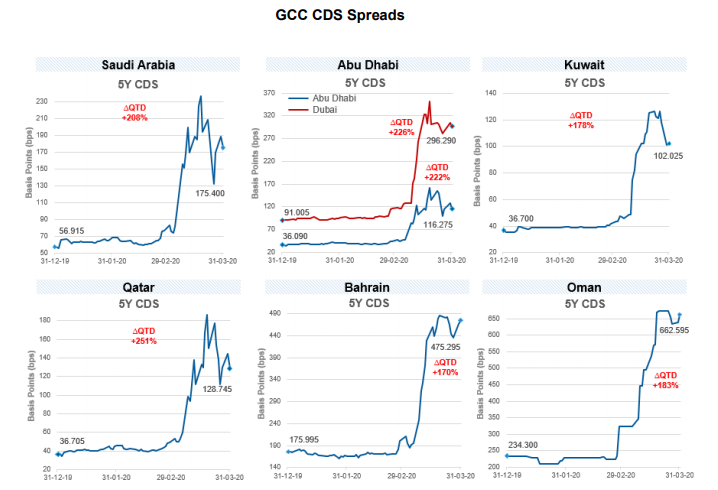 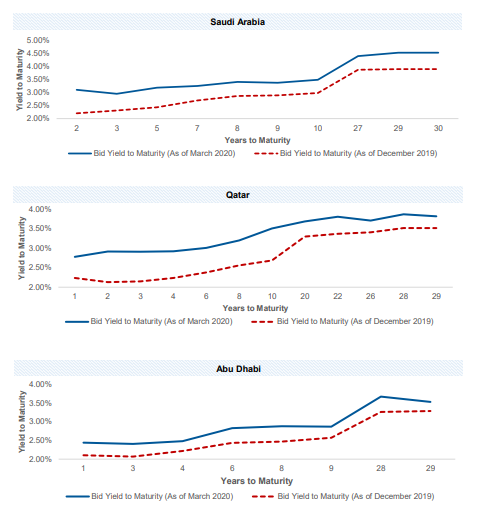 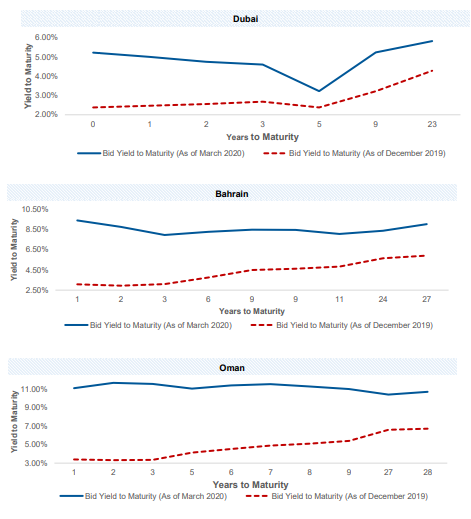 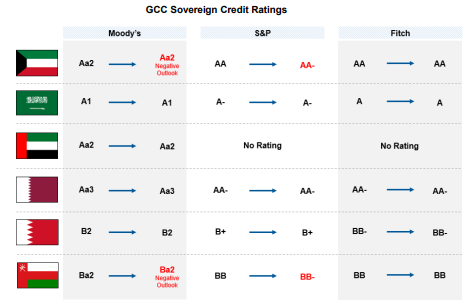