Saudi Arabia seems to be in a hurry to reform its economy and capital markets. It is not without reasons. Low oil prices have resulted in Saudi Arabia burning through its reserves at a record pace. Saudi Arabia’s foreign exchange reserves peaked during the third quarter of 2014 reaching USD 754 Bn just before the oil prices started their plunge. Saudi Arabia lost close to $160 Bn in revenues in a matter of 18 months. Its GDP is heavily skewed on oil accounting for close to 44% of the GDP which poses a problem as oil price drops. IIF projects non-hydrocarbon revenues as a % of total to increase from 8% in 2012 to 45% in 2107 on account of low oil price and announced reforms. 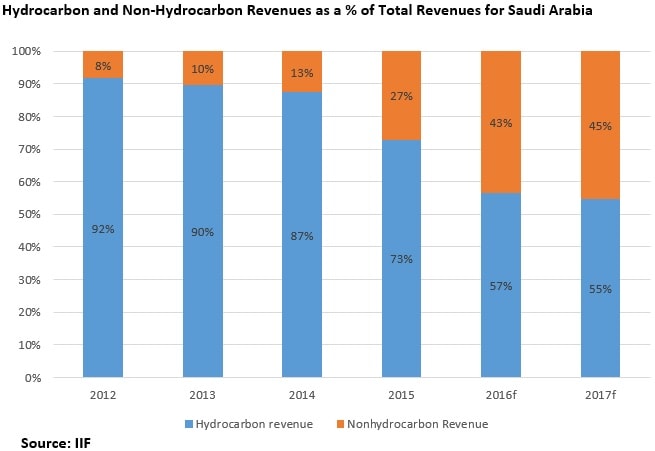 The Tadawul All Share Index plans to increase the listings to 250 companies from about 170 now, over the next seven years. Its current market capitalization of $396 billion is expected to add close to $ 120-130 bn post the IPO of Aramco and possible inclusion into the MSCI emerging market index by Mid-2017. The aim of the government is to increase the size of Saudi Arabia’s stock market to match that of its GDP within seven years (2014 -$798 Bn) as part of the vision 2030 statement released by the country’s crown prince. Another aim of the government is to make the stock market a better representative of the economy. Currently Financials dominate the stock market capitalization accounting for 39% of the stock market with stocks in the energy segment accounting for 21% of the market. In terms of GDP however the share of energy companies is double that figure at close to 40%. We have tried to find out the changes that both these events would have on the distribution of the stock market capitalization.

Large-scale infrastructure spending combined with the currency peg and the necessity to finance budget deficits means that the Saudi Arabian government should look at alternative means of increasing its income. IMF (The International Monetary Fund) warned in October 2015 that Saudi Arabia could run out of financial assets by 2020 if the government maintained its current policies and spending patterns underscoring the need to shore up public finances.

In a recent announcement, Saudi Arabia announced a string of reforms to its capital market that could attract billions of dollars of foreign money and smooth sales of state jewels – for instance Saudi Aramco. There were three major changes that were introduced in the Saudi capital market – Increased foreign ownership, Securities lending and Short Selling. 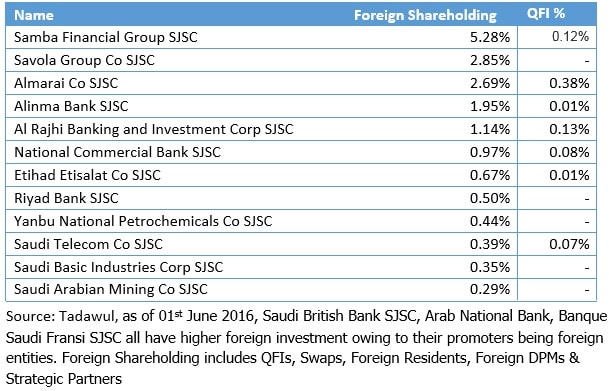 Other changes that were introduced included – introduction of securities lending, covered short selling and extending the settlement of trades to the globally followed standard of T+2 days instead of the current T+0 days. The T+0 days had put lot of foreign investors in trouble as they had to settle the trade within the day which required huge amount of capital to be ready before trading. Also, given the Sunday - Thursday business week, things get even more complicated. Securities lending and short-selling would help in price discovery helping in better efficiency in the market.

Possible Impact of these regulations

Market Opened - Where are the foreign investors?

Saudi Arabia opened up its markets to investors during June 2015 following the announcement in 2014. Liberalizing the stock market, one of the few major global exchanges to have restricted foreign access was expected to attract a huge amount of foreign investors. However the expectations failed to materialize which resulted in the stock market falling on the day that foreign investors were allowed to trade. Primary reasons for the poor show on the day of market opening were two – Initially, Foreign Institutions that had applied for license did not get them on time and stock market valuations were on the higher side compared to regional markets. The situation continues to persist with foreign holdings not seeing any major improvements. QFI holdings remain below 1% for many large cap stocks.

Rich valuations play spoilsport – When the stock market opened up to investors last June it was already the region’s top performer returning 15% (As of June 2015) and trading at a PE of 15.5 times its 12 month forward earnings. In comparison the broader Middle East market were trading at a multiple of less than 14 times earnings while global emerging markets were trading at 11.9 times. Saudi Arabia is not part of MSCI EM index and currently features as a standalone market closing the doors for passively managed funds. Actively managed funds as opposed to passively managed funds are very choosy about their investments and would only invest if the returns are expected to be commensurate with the level of risk. Investor sentiments were further dampened by the deteriorating economic conditions in Saudi Arabia due to decline in oil prices. Banking sector which form the majority of the market cap was worst affected.

QFIs shareholding remains well below 5% - What is the point in changing it to 10% - Some analysts also point out that this was more of a measured opening to help foreign investors get a feel of the market and for Saudi Arabia to adjust itself to foreign investors. Recent reform announcements suggests that Saudi Arabia is serious about bringing in foreign investors and getting into indices provided by MSCI (particularly EM Index) and FTSE. On successful inclusion more foreign investment can be expected to reduce tracking errors of foreign funds tracking such indices.

There is a significant difference between the composition of GDP and the stock market segmentation (by market capitalization). Decision on Saudi Arabia’s inclusion into emerging market index is expected to be taken by MSCI by Mid-2016 and possibly addition into the index would happen by mid-2017 with an initial country weightage of 2%. We look at how this can affect the sector composition of Saudi Arabia’s stock market. 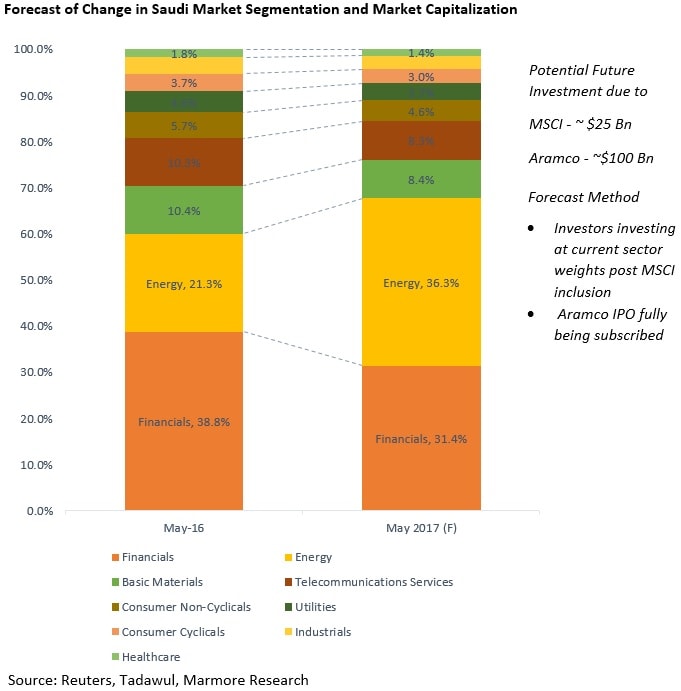