Corporate governance in the GCC: How current practices can be further enhanced and how existing challenges can be overcome

There is now intensified international convergence of prudential and regulatory codes and standards on matters such as anti- money laundering and counterterrorist financing. In a regional context, the role of the stock exchanges and capital markets are growing in the GCC, which traditionally has had a large number of privately held and family-owned enterprises. There is little doubt there is still some way to go before all of the GCC develops highly robust corporate governance codes and practices.

Corporate governance in the GCC has come under sharper focus with the recent Mobily incident. Mobily, the Saudi subsidiary of the UAE-based telecom major, Etihad Etisalat, admitted in November 2014 that it would have to restate 18 months’ worth of corporate earnings due to alleged accounting irregularities. The development has caused Mobily’s shares, which was one of the strongest telecom stocks, to lose about 60% in value from November 2014 through October 2015, with trading in the shares suspended twice in 2015 (as of October 2015) by the Kingdom’s market regulator.

GCC countries will need time to evolve their corporate governance structures, in line with best practices from around the world. There is awareness of the need for patience to allow corporate governance systems to grow into maturity. For instance, Kuwait’s corporate governance codes, issued in 2013, called for the separation of the positions of chairman and chief executive, the prompt disclosure of corporate information to the market, and the establishment of internal controls and risk management.

The new codes framed by the authorities have increased the number of audit requirements that add to the increasing cost of compliance to companies. However, keeping in mind the practical constraints that may hinder some of the Kuwaiti companies from applying the governance rules, Kuwait’s market regulator extended the implementation deadline by 1.5 years to the end of 2016.

According to a Gulf Family Business Council and McKinsey & Company study (released in October 2015) that surveyed the largest GCC family-owned businesses that collectively generate US$100 billion in yearly revenues, family-owned businesses in the region have made considerable progress in establishing corporate governance structures, but are lacking when it comes to systematic implementation. In an era of global competition, deficient corporate governance implementation can pose challenges to enterprise sustainability for a number of GCC companies. Though many family-owned GCC businesses are now competing with international players, they are still characterized by centralized decision-making that diminishes the capacity for strategic agility and operational nimbleness.

There are two principal forms of articulating corporate governance codes: The ‘principles-based’ approach and the ‘rules-based’ approach. In the GCC, corporate governance codes can tend to be rather rules-based, wherein specific instructions are provided and a set of rules are explained for extracting compliance. In some jurisdictions, such as in the UK, the Cadbury Commission of the London Stock Exchange released their Combined Code of Governance Principles and Best Practices which are principles- based. Even in Hong Kong the good governance practices were published as a ‘Code of Best Practices’. The codes’ intention is not to provide rules to be rigidly adhered to, but rather to serve as aspirational guidelines.

The principles-based approach emphasizes more on the essence of the guidance and attempts to foster responsibility and the exercise of professional judgment. This approach also eliminates the mechanistic mindset of ‘box-ticking’ to comply with legislation and the use of potential loopholes to avoid compliance.

In 2014, Fitch Ratings cautioned that though corporate governance practices are consistently improving in the GCC, privately-owned companies are being impeded due to a lack of effective independent boards, limited transparency and weak disclosure practices. For GCC companies with international ambitions, lagging corporate governance standards can discourage international investors and partners when faced with tightly controlled company ownership structures that practice limited transparency. GCC countries will also have to look at inculcating more diversity in the board, by bringing in independent directors with subject matter expertise. This will aid the process of interdisciplinary thinking that is vital for the success of modern organizations. For example, the following table provides ideas as to how board structures can be reimagined in the GCC (table developed in the context of Kuwait). 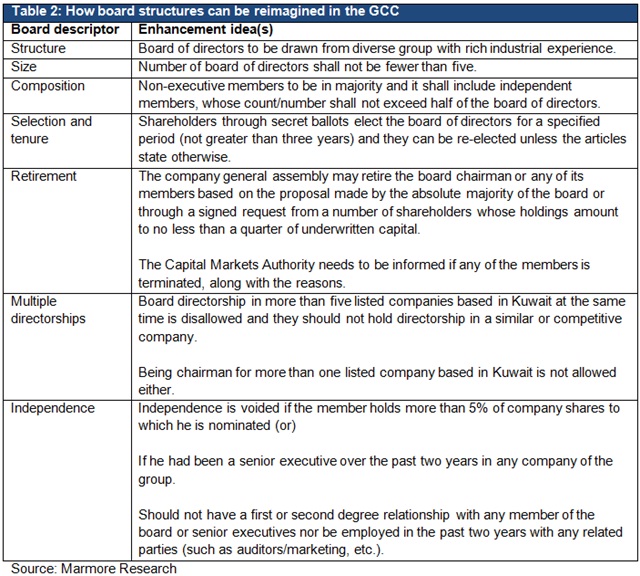 Large companies in the GCC are now recognizing the need to work with professional bodies to access best practices and shared learning. For example, in March 2015, Saudi Arabia’s mining and metals major, Ma’aden, signed an agreement with the GCC Board Directors Institute, which would allow Ma’aden employees to access the latest training, best practices and networking opportunities. GCC countries are also looking to enhance board diversity in terms of gender. In 2012, the UAE cabinet enacted a regulation making it mandatory for the country’s corporations and federal agencies to include women in their boards. Even as the policies, regulations and structures fall into place, a lot would depend on practicing the spirit of corporate governance, beyond just mere compliance with the rules.

M R Raghu is the managing director of Marmore Mena Intelligence, a research house focusing on economies in the MENA region. He can be contacted at [email protected].