Can startups be a solution for job creation?

Globally, start-ups have become a raging sensation and mostly commonly, they are equated with tech-startups, which is a flawed presumption. Though there is no precise definition for start-ups, it can be loosely defined as an early stage entities from various sectors working towards innovation, implementation and commercialization of products and services, in most cases supported by technology.

The GCC region too has caught-up with this global phenomenon and has some successful start-up stories to boast about. Start-ups are being projected as forerunners of economic growth through job creation and also pursued as the solution for job creation. However, to what extent this presumption about start-ups holds well is debatable.

Prior to answering the question-if start-ups can be key to the growing concern of unemployment in the region, the effectiveness of start-ups in job creation has to be assessed.  The Y-o-Y increase in jobs and establishment in the UAE across sectors most cases has resulted in incremental jobs. It is however obvious, that the growth in the jobs on the account of newer establishments coming into existence has be not been consistent within/across sectors.

For instance, the educational sector employment strength increased by 2,571 employees while 61 new establishments were set-up in 2013. Similar level of job creation was witnessed in 2015 in the financial sector but there were only 20 new establishment set-up.

Contrary to the trend in the financial sector discussed above, in the construction sector 1,086 new establishments were set-up in UAE in 2012, yet, the industry employment strength decreased by 28K. Similarly, the transportation sector witnessed a drop in number of establishments during the years 2012 and 2013, but this didn’t result it drop in the growth in employment, rather the sector employee strength increased by c.30K.

Start-ups a solution for job creation?

The inherent high failure risk of start-ups could cause significant volatility in the job the market. The solution for the job creation should be more stable and consistent and not something which is unpredictable. Moreover, the early stage of start-ups would limit the employment generation, as they tend to run leaner operations to preserve cash and invest it in the business. The employee strength of the start-ups discussed in the table below establish the idiosyncratic nature of start-ups. Depending on the nature of the start-up, a five-member startup could create a much larger impact than a 50-person startup. Therefore, start-ups should be considered as potential source of innovation rather than solution for employment generation. 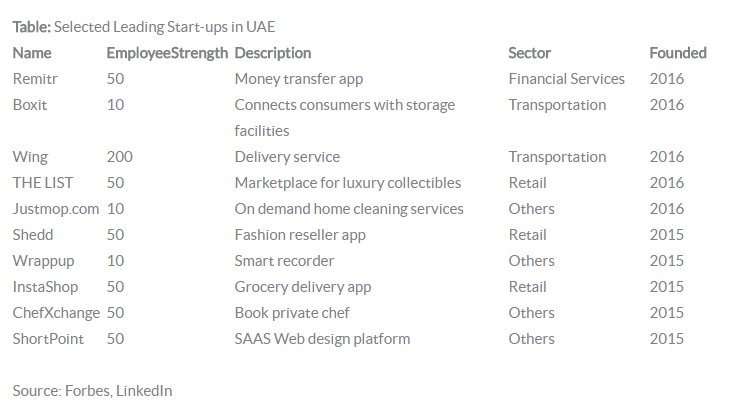 This article is published in "Marmore Blog"