Kuwait Financial Centre “Markaz” published an analysis on the Swiss Franc and the ramification  of the Central bank of Switzerland’s decision to  abandon its cap on CHF/EUR conversion. The analysis tackled the decision reasons as well as its impact on the currency, the European economy and market.

The analysis stated that the crisis began on January 15, 2015, when the Central bank of Switzerland abandoned its cap on CHF/EUR conversion which was at SFr 1.2 to the Euro. The abrupt removal of the cap sent the Swiss franc up 30% in an unprecedented swing among ‘reserve’ currencies. The shock could be felt in the Swiss stock exchange where the SMI fell 8.7% on back of the news, while Euro fell to a decade low against the US dollar to EUR/USD  1.15, while gold closed at 1279 $/Oz with 4% weekly gain. 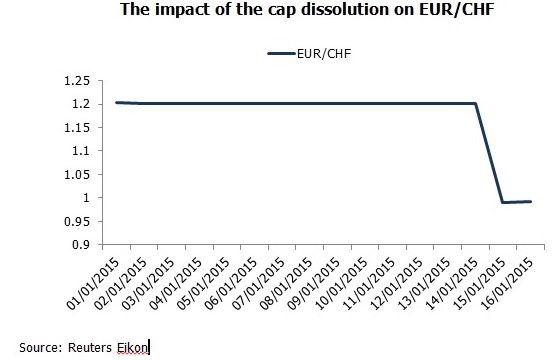 The analysis said that the exact rationale behind this decision was not clear. However, analysts suggest that the main reason behind the dissolution of the cap is due to the huge cost bared by the Swiss central bank to “peg” the franc to the EUR. The SNB’s Balance sheet tripled since the begging of 2008 –  two times greater than the bank of Japan. The SNB’s balance sheet represented 86 per cent of Switzerland’s gross domestic product — far higher than the BoJ (60 per cent) or the Federal Reserve (about 25 per cent).    Last month the Central bank of Switzerland announced that it stands by its peg to Euro and will not change it in the near future. However, reports on a QE program in the Euro zone helped shaped the Swiss decision on Thursday since any “enhancement” to the Euro currency would require further intervention by the SNB to maintain the peg at a huge cost to the bank’s balance sheet.

Currency wars a term used heavily in past 4 years and it is here to stay - Currency manipulation is a zero sum game where one wins while other loses. Markaz analysis doesn’t believe that the Swiss franc is part of that; what happened is simply the removal of an artificial support system and the franc is finding its real value among currencies. That said, the removal of the peg turned several brokers insolvent Alpari, a U.K online foreign exchange declared bankruptcy. IG Group forecast that it would take a hit of around USD 46 mn , while Bloomberg suggests that Barclays lost “tens of millions”, and in the Hedge fund sphere, Everest macro hedge fund blew up after USD 1 billion in losses due to the central bank decision to remove the peg.

Kuwait Financial Centre K.P.S.C “Markaz”, established in 1974, is one of the leading asset management and investment banking institutions in the Arabian Gulf Region with total assets under management (AUM) of over KD 1.12 billion as of Sep 30th, 2014 (USD 3.89 billion). Markaz was listed on the Kuwait Stock Exchange (KSE) in 1997.