The Kingdom of Saudi Arabia (KSA) is bordered by two major shipping lines: the Gulf, which is an extension of the Indian Ocean, and the Red Sea, which links the Mediterranean Sea with the Indian Ocean through the Suez Canal.

There are currently 9 ports in Saudi Arabia and container traffic in the Kingdom’s ports witnessed a CAGR of 9% between 2004 and 2011, increasing from 3 million Twenty Foot Equivalent Units (TEU) to 6 million TEU. The Jeddah port alone accounted for 4 million TEU of container traffic in 2011 and is one of the top 50 container ports in the world with a ranking of 27. Port authority for all the ports is Saudi Ports Authority and independent terminals of a port are given to a private sector for operation.

The ports of Jeddah and Dammam are KSA’s busiest ports, handling container volume of 4 million and 1.5 million TEU respectively. The bulk cargo volume handled by the Saudi Arabian ports reached its peak in 2008 and decreased during the next two years. Volume handled increased in 2011 to nearly 95 million tonnes. Liquid bulk (mainly oil) is the most important cargo followed by dry bulk. The ports of Jeddah, Jizan and Yanbu have passenger terminals for hajj pilgrims. 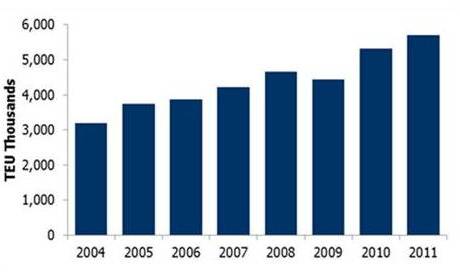 There are no major free trade zones in Saudi Arabia except the Tusdeer Bonded and Re-export Zone. The development of the 4 Economic Cities is Saudi’s attempt to attract Foreign Direct Investment (FDI) to diversify the economy. It is important for Saudi Arabia to invest in port developments, to handle the increase in non-oil exports and to attract FDI through the Economic Cities, Free Trade Zones and Industrial Cities located adjacent to the ports.

Two new ports are being developed in King Abdullah Economic City (KAEC) and Jizan Economic City. Development of USD 6bn Millennium Seaport in KAEC started in 2010 and is set to complete by 2019 in two phases. The phase I of the port is scheduled to complete in 2013 and will have a capacity of 3.8 million TEU. The phase II will be completed by 2019 and will add 6 million TEU, taking the port’s total capacity to 10 million TEU.

King Abdul Aziz port, otherwise known as Dammam Port, is also undergoing expansion. A new container terminal is being planned which will double the port’s capacity to 3 million TEU. The project is scheduled to be completed by 2015. This was a much needed expansion as Dammam port is marred by heavy congestion and this is the only port in Saudi Arabia with a railway link which connects the city and port’s docks directly to industrial complexes.

Kuwait Financial Centre “Markaz”, with total assets under management of over KD 903 million as of December 31, 2012, was established in 1974 has become one of the leading asset management and investment banking institutions in the Arabian Gulf Region. Markaz was listed on the Kuwait Stock Exchange (KSE) in 1997.