Kuwait Financial Centre “Markaz” in its recently released research note has analyzed the role of oil for GCC economies, estimated oil price scenarios for 2009, and explored the relationship between oil and GCC stock markets. M.R.Raghu, Rajiv Bishnoi and Layla Al-Ammar, the authors of the report, note that every successive oil price spike actually goes to negate the feeble attempts by oil producing and exporting countries, especially the GCC, to diversify their economies and reduce the dependence and inherent volatility. The region has remained a price taker in spite of the so-called stranglehold that it is supposed to possess. Being a capital intensive industry, it does not solve social issues like unemployment. Being nationally owned, it does not get represented in the local stock markets. Thus, the intricate web of oil produces more dimensions than what is normally estimated.

The report has concentrated on determining how strong the role of oil is for GCC economic planners, what a credible expectation for oil price is -both in the short and long-term, in addition to exploring the strength of the relationship between oil prices and the GCC stock markets.

The GCC Economics of Oil

GCC governments have been on an expansionary run over the last few years Recent oil price declines and expected further downward pressure in 2009 calls these expansionary fiscal policies into question; Government expenditure must remain on track in order to spur economic growth and continue the execution of infrastructure development, hence, in the absence of high oil revenues, GCC countries must run fiscal deficits or prune their expenditure programs.

This brings into question breakeven oil prices (BEP) for the GCC in 2009; i.e. the oil price at which, all other factors remaining constant, the state budget would be in balance. The more oil rich nations, like Kuwait and Saudi Arabia, will be able to balance their 2009 budgets on much lower oil prices ($43/bbl and $42/bbl, respectively) than less oil rich countries like Bahrain, Qatar, and Oman. 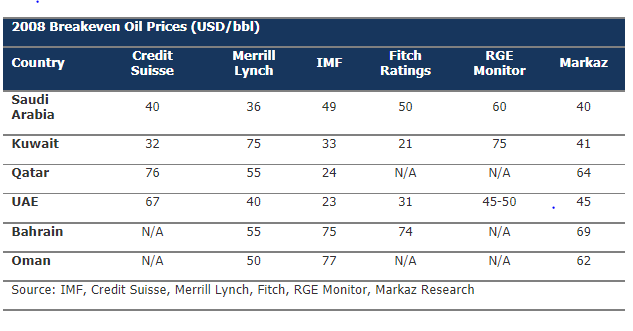 Crude oil began 2008 at around $96/bbl, gaining steadily through the first half of the year before surging to a life-time high of $147/bbl in July on the back of a plummeting US Dollar, speculative investments in commodity markets and renewed political tension in the Middle East. The US-led global financial crisis and weaker economic indicators across the globe caused crude oil to rapidly shed 3/4th of its July 08 high values to the $30-$40 range by December 08. Oil prices closed out 2008 with an annual loss of 56%, the first annual decline since 2001 and the largest in its history of trading.

A weak global economic outlook for 2009; with most of the developed world heading into recessions while demand in growing economies like China and India begins to slacken, does not bode well for oil prices.

In the longer run, most analyst and energy agencies expect much higher oil prices resulting from supply constraints against steady demand Energy analysts and various international agencies expect oil prices to rebound to an average of $52/bbl in 2009, with a possible high of $65-$70 should additional OPEC production cuts materialize and political tensions in the region intensify.

In addition, a recent survey of 33 analysts by Bloomberg indicates that oil futures may rebound from their worst year to average $60 a barrel in 2009, representing a more than 50% gain from the year end closing price of $38/bbl. OPEC officials have also voiced an opinion on reasonable oil prices of $ 70-75/bbl. Furthermore, the Markaz survey presented the overall outlook for the next three years as cautious, but not overly pessimistic. The majority of those surveyed believe that oil prices will remain in the $50 - $100/bbl range or higher until 2011; except in the first half of 2009, where surveyed respondents believe that there is a 50% chance of oil price remaining in $30-50 range, and also a significant 23% probability of oil price even falling below $30.

The authors conclude that oil prices for 2009 would average out as below:

In summary, given the dependence of GCC economies on oil revenues, it should come as no surprise that oil prices should have a relationship with movements in the stock markets. As such, an expectation of future oil price trends may be helpful in ascertaining which direction stock markets may move in

Kuwait Financial Centre 'Markaz', with total assets under management of over KD1.2 billion as of September 30, 2007, was established in 1974 has become one of the leading asset management and investment banking institutions in the Arabian Gulf Region. Markaz was listed on the Kuwait Stock Exchange (KSE) in 1997; and was recently awarded a BBB+ corporate rating by Capital Intelligence Ltd.