No Signs of Recovery

A report by Kuwait Financial Center “Markaz” says that February was yet another difficult month for the GCC, with all stock markets ending the month in negative territory except Oman’s Muscat Stock Market (MSM) and the UAE (NBAD UAE General Index) which gained 0.83% and 2.47%, respectively. The month’s worst performer was Qatar’s Doha Stock Market, which lost 15.52% following a loss of 24% in the January. Kuwait’s Weighted Index ended the month with a loss of 8.24% following a 13% loss in January. 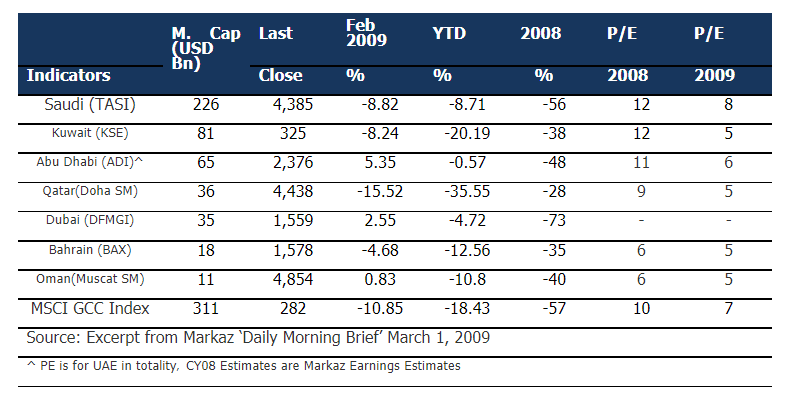 Volatility (as measured by the Markaz Volatility Index)

In February, volatility levels cooled off across the GCC with the exception of Qatar and Dubai, where volatility levels increased. The highest declines in volatility were in Oman and Bahrain, with 46% and 44%, respectively. Volatility in Kuwait declined 32% from 3,869 in January. Qatar’s volatility shot up by 70% following a spike of 109% in January.

Correlations among GCC markets declined in February. Kuwait, Dubai, and Abu Dhabi’s correlations with every market declined from the previous month; correlations with the S&P 500 continue to be attractive and in certain cases (Kuwait, Oman, & Bahrain) continues to be either negative or close to zero.

Saudi Arabia’s Tadawul All-Share Index (TASI) lost 8.82% MoM in February, after gaining a marginal 0.12% in January. The Tadawul’s loss was led by the Petrochemical and Building & Construction sectors, which lost 13.67% and 12.10%, respectively, for the month.

The Kuwait Index fell for the eighth consecutive month in February, declining by 8.24%. The Index’ decline was pushed by the Investment and Real Estate sectors, which fell by 10.71% and 7.59%, respectively, for the month. The only sector index to see a gain was Insurance, which increased by a marginal 0.12% during the month.

The total volume traded in Kuwait shot up nearly 60% in February, while total value traded increased 19% to USD3.71 Bn in the same month.

The UAE markets ended the month on a positive note; the Dubai Financial Market (DFM) gained 2.55% while the Abu Dhabi Exchange (ADX) gained 5.35%. The NBAD UAE General Index gained 2.47% for the month.

The Materials sector index in Dubai fell by 21.5%, the largest among DFM sector indices, while the Consumer Staples and Banking indices were flat for the month. In Abu Dhabi the Real Estate and Industrial sectors fell by 14% and 13%, respectively, while the Energy sector gained 30.2% for the month.

Concentration of the top five stocks in terms of volume and value traded to market capitalization was 11% and 14%, respectively.

The Doha Stock Market (DSM) fell an additional 15.52% in February following a 23.72% loss in January. Losses on the DSM were led by the Banking and Industrial sectors, which lost 19.43% and 12.52%, respectively, in February.

In February, total value traded on the DSM shed 20% to equal USD 1.13 bn while total volume traded declined by 7% to equal 200 mn. Concentration of the top five stocks in terms of volume and value traded to market capitalization was 15% and 38%, respectively, in February.

The index declined 4.68% in February (the ninth consecutive monthly loss) following a decline of 8.27% in January. February’s losses were led by the Banking sector, which shed 10.55% in the month. The only sector index to gain was Industrials, which was up a 3.08% for the month.

In February, total value traded increased 62% to USD 53 mn while total volume increased 46% to 52 mn. Concentration of the top five stocks in terms of volume and value to the market capitalization was 13% each.

Kuwait Financial Centre 'Markaz', with total assets under management of over KD1.2 billion as of September 30, 2008, was established in 1974 has become one of the leading asset management and investment banking institutions in the Arabian Gulf Region. Markaz was listed on the Kuwait Stock Exchange (KSE) in 1997; and was awarded a BBB+ corporate rating by Capital Intelligence Ltd.