Markaz: The Financials, Industrials, Insurance and Utilities sectors witnessed the highest number of transactions in Q2-2020

UAE’s utilities sector leads the top GCC M&A transactions during Q2 2020 as per a report recently issued by the Investment Banking Department at Kuwait Financial Centre “Markaz”. The National Central Cooling Company acquired an 80% stake in Emaar Properties’ district cooling business for a total consideration of USD 675.2 million. The Dubai-based business has a total capacity of 150,000 refrigeration tons, all of which will be distributed through three cooling plants. It is worth noting that a refrigeration ton is a unit of power that measures the heat-extraction capacity of a refrigeration and/or air conditioning equipment.

The second largest transaction was taken on by Oman Arab Bank, who fully acquired Alizz Islamic Bank at USD 0.1 per share, for an estimated value of USD 100.0 million. The next transaction involved Dallah Healthcare Company, who acquired a 59% stake in Care Shield Holding Company, a Saudi healthcare firm, for a total consideration of USD 85.8 million. Moreover, the following two transactions are both estimated to be multi-billion dollar deals however the parties involved have yet to disclose the finalized terms and as such, these values are subject to change. The first transaction involves the Abu Dhabi Power Corporation (“AD Power”), who announced they will be acquiring 99% of Abu Dhabi National Energy Company (“TAQA”) through a share swap deal that is valued at approximately USD 21.3 billion. Based on the terms of the transaction, AD Power is expected to transfer a majority of its power and water generation, transmission and distribution assets to TAQA in exchange for 106.4 billion shares in the firm, at USD 0.2 per share. Finally, Saudi’s Samba Financial Group (“Samba”) has announced it has signed an agreement with National Commercial Bank (“NCB”), a fellow local bank, regarding a potential merger whereby NCB would fully acquire Samba for an estimated value of USD 14.9 billion. Based on the information disclosed, NCB is expected to issue between 1.4 -1.5 billion new shares at USD 9.9 per share.

Moreover, GCC acquirers actively acquired both regional and international companies, whereas in the previous quarter, they primarily invested in the regional market. Throughout Q2 2020, GCC acquirers closed a total of 13 transactions that involved international companies, which is 30% greater in comparison to Q1 2020, which recorded a total of 10 closed transactions involving foreign targets. Saudi and UAE buyers each accounted for 46% of these transactions, followed by Bahraini buyers, who accounted for the remaining 8%. Kuwaiti acquirers purely invested in local companies while Oman closed a total of two transactions, one involving a local company while the other involved a regional firm. Lastly, Qatar did not close any transaction throughout the quarter.

The GCC market attracted a significantly higher level of interest from foreign buyers when compared to the previous quarter, successfully closing a total of five transactions throughout the quarter. This represents a 400% increase relative to Q1 2020 and approximately a 29% decrease relative to Q2 2019. In a trend that has persisted for the past few quarters, UAE targets received the greatest level of foreign interest relative to the remaining GCC countries. Overall, UAE targets accounted for 60% of the total transactions taken on by foreign buyers, followed by Omani and Saudi targets, who each accounted for 20% of total closed transactions. On the other hand, neither Bahrain, Kuwait nor Qatar received any foreign interest. It is worth noting that a similar trend was witnessed back in Q1 2020. 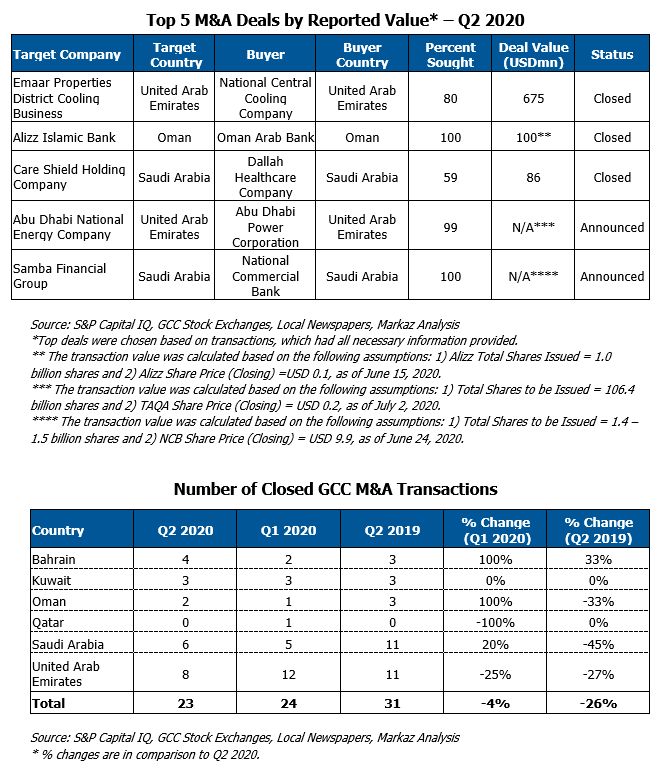 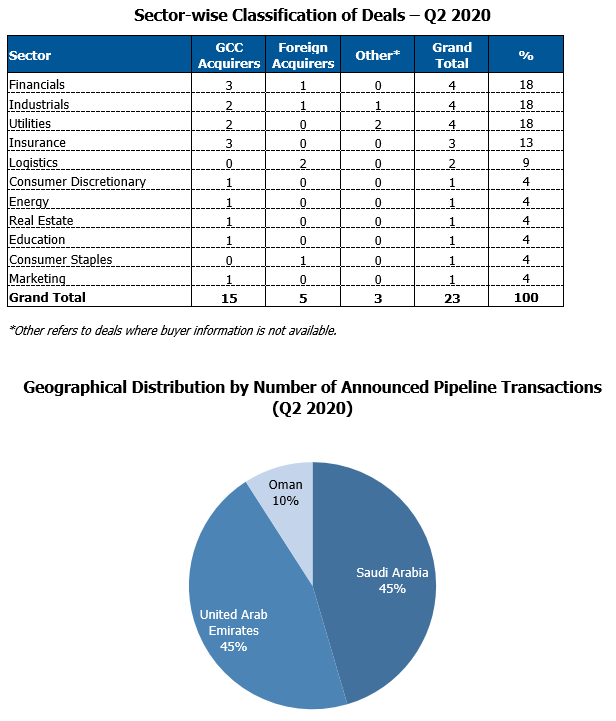