Kuwait Financial Centre “Markaz” recently released its Monthly Markets Review report. Markaz report stated that GCC markets, except Kuwait, extended their losses for the third consecutive month in October, after the sell-off in Saudi Arabia. The decline in Saudi stocks during the month was fueled by Fitch’s downgrade of the country’s credit rating due to increased geopolitical risk and the circulation of uncertain news over Saudi Aramco’s IPO date.

Kuwait’s All Share Index snapped its two-month losing streak, registering gains of 0.7% during October. Kuwait’s improvement in Global Competitiveness and Ease of doing business rankings contributed to the positive sentiment, helping to rebound. Among Kuwait’s Blue Chip companies, Zain and Agility emerged as the biggest gainers, outperforming their banking peers. Zain and Agility’s shares gained 5.0% and 4.3% respectively in October. Consumer Services was the best performing sector in Kuwait, rising by 6.0% for the month while Consumer Goods was the worst performer, losing 6.4%. Despite a muted performance in October, Banking sector stocks remained the best performers in YTD 2019, with Boursa Kuwait’s banking index registering yearly gains of 12.6% as of October end.

Regionally, the S&P GCC composite index fell by 2.6% for the month due to the weakness in Saudi markets. Abu Dhabi was the best performer in October, gaining 1.0%, followed by Kuwait and Bahrain, whose indices increased by 0.7% and 0.4% respectively. Saudi Arabia, Dubai, Qatar and Oman ended the October in negative territory, with their indices decreasing by 4.3%, 1.2%, 1.7% and 0.4% respectively. Earlier during the month, investor sentiments in Saudi markets were affected by Fitch Agency’s decision to downgrade Saudi Arabia’s credit rating from A+ to A citing the escalation of Geopolitical risks. Furthermore, the circulation of news regarding the potential date for the IPO of Saudi Aramco triggered a selloff close to the end of the month as investors liquidated their holdings in other equities to make room for the much awaited share sale of Saudi Aramco. Consequently, Saudi markets fell during October and wiped out their yearly gains, closing the month with YTD losses of 1.1%.

Markaz report stated that among the GCC Blue Chip companies excluding Kuwait, Masraf Al Rayan and First Abu Dhabi Bank were the top gainers for the month with their share prices rising by 5.9% and 1.2% respectively.

The performance of Global equity markets were largely positive with the MSCI World Index gaining 2.5%. The U.S. juggernaut continued to roll as the S&P 500 extended its gains to 21.2% for YTD 2019, after a rise of 2.0% in October. The S&P 500 touched record highs on Oct 30th, after the U.S. Fed decided to cut its policy rates by 25 basis points to the range of 1.50% to 1.75%. However, the Central Bank also signaled that it may pause in its easing cycle. Concerns surrounding the conclusion of a Brexit deal affected U.K.’s markets, with the FTSE 100 index closing 2.2% lower during October. Emerging markets had a positive month, with the MSCI EM posting monthly gains of 4.1%.

Oil markets simmered down after the volatility witnessed in recent months, trading at a narrow range of between USD 56-62 per barrel during October. Oil prices closed at USD 60.2 per barrel at the end of October, which is 0.9% lower than September. Renewed optimism surrounding the progression of the U.S.-China trade deal have temporarily eased concerns on the demand side. However, OPEC continued to slash its demand forecast for the third month running, citing weaker than expected demand emanating from Asia Pacific and North American region. 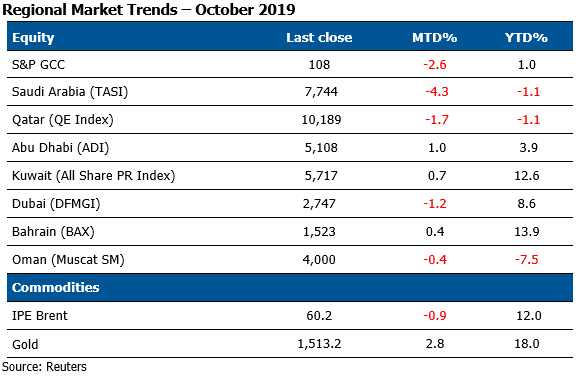