Kuwait Financial Centre “Markaz” recently released its Monthly Market Research report. In this report, Markaz examines and analyzes the performance of equity markets in the MENA region as well as the global equity markets for the month of June 2017.

The report stated that the performance of MENA markets were mixed in the month of June. S&P Pan Arab index ended flat at 0.6% dragged lower by Qatar while supported by the rise in the Saudi stocks. Saudi Arabia’s Tadawul index soared 8.1% in June after the announcement from MSCI on its possible inclusion in the emerging markets index by the mid of 2019. Egypt and Dubai bourses gained 1.7% and 1.8% respectively. Dubai’s index benefitted from the gains in Emaar properties after the company announced its plans to sell of 30% of its real estate business in the market. Jolted by the geopolitical crisis, Qatar’s main index shed 8.1% in the month of June making it the worst performing index across the MENA region. The index plummeted by 13.5% YTD, as an estimated USD 35 bn has been pulled out of Qatar stock market mainly by the GCC investors. Oman’s Muscat all share index was another poor performer from the MENA region. The index lost 5.6% in the month of June, as investors were worried on the dampened economic growth prospects. Weak sentiments because of falling oil prices weighed on Kuwait weighted and price index that fell by 1.3% and 0.3% respectively.

Value traded in June reflected the poor sentiments in the market, with volume traded increasing by 9% while the turnover in the market declined by 13%. All MENA markets, barring Abu Dhabi and Dubai, witnessed fall in liquidity. Bahrain and Kuwait bourses evidenced 45.6% and 31.7% decline in value traded. Liquidity declines are common in the MENA bourses, especially due to poor trading activity in the month of Ramadan. In terms of valuation, P/E of Morocco (19.6x), Saudi Arabia (15.1x), and Kuwait (13.9x) indices were at premium, while the markets of Dubai and Bahrain trading at 9.5x and 9.3x were relatively cheap among MENA markets.

Performance of blue chips was mixed in June. Saudi Arabian blue chips witnessed stellar performance in the month of June. NCB (26.7%), Saudi Electric Company (12.1%) and STC (12%) were the top performers. Surprisingly, Ezdan holding from Qatar was among the top performers in June gaining 15.2% with speculative trading about the buyout of shares at market prices pushed the prices upward. Qatari stocks were among the worst performing blue chips in GCC. QNB, Ooreedo and Masraf Al Rayan share prices plunged by 32.8%, 18.7% and 10.8% respectively.

On June 05, Saudi Arabia, Egypt, the United Arab Emirates (UAE) and Bahrain severed ties with Doha, accusing the Qatari government of promoting instability in the region. The four Arab countries announced that they would close air and sea transport connections with Qatar, which is the world’s top exporter of liquefied natural gas (LNG). Also, the three GCC countries—KSA, UAE and Bahrain—have blocked their nationals from travelling to Qatar, while giving Qataris two weeks to leave their nations. Kuwait’s mediation efforts would play a crucial role in bringing the concerned nations to the table and resolve the issues by devising a win-win strategy for the conflicting parties and the Middle East.

IPE Brent crude tumbled 15.7% from the start of 2017 making it the worst performing first half for oil after 1998. IPE Brent fell by 4.8% in June as Libya and Nigeria continued to pump in more oil into the market. Inventory levels in the Asian markets, especially Malaysia and Singapore have spiked to all time high in 2017. Supply has also been on the rise from non-OPEC producers such as the U.S, Canada and Brazil adding to the supply glut. 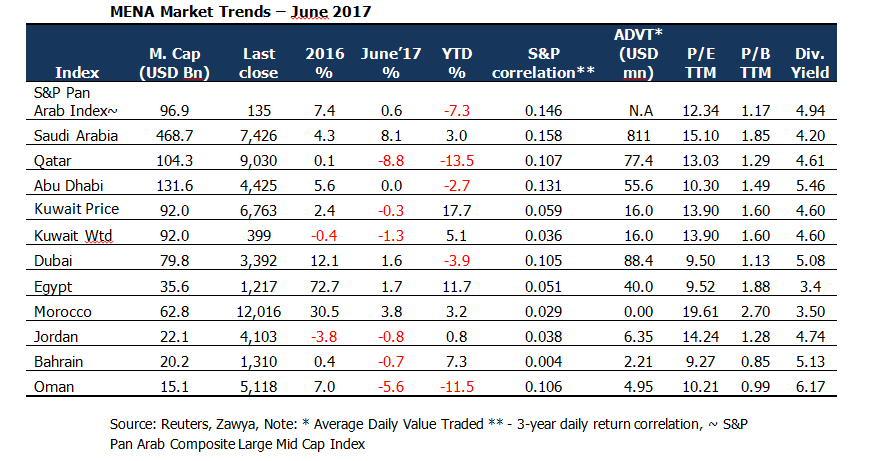