Kuwait markets performed positively, with the Kuwait All Share index registering a gain of 6.6% in August. Regionally, the S&P GCC composite index gained 6.1%, with all markets in the green. Among Kuwait sectors, consumer goods index was the top gainer, rising 9.9%, while Consumer Services Index saw the biggest decline, down 5.1% for the month. Among Blue Chips, National Bank of Kuwait gained the most at 9.0% and Agility Public Warehousing lost 2.5% for the month. Kuwait All Share Index’s PE ratio was at 12.8 by the end of the month. Market liquidity in August as indicated by the average daily traded value has increased by 45% over July to reach USD 118 million. Moreover; Kuwaiti parliament has allowed companies to opt for settlement with creditors or a restructuring plan before they are forced to declare bankruptcy. This aims to protect ailing companies and attract foreign investors. The parliament has also approved transfer of state revenue to Future Generations Fund conditional on budget surpluses. Parliament has returned the public debt law to the finance committee for further study. Meanwhile, the finance minister has highlighted the depletion of treasury’s liquidity in view of prevailing low oil prices.

Dubai gained 9.5% in August followed by Bahrain and Saudi Arabia, which gained 7.0% and 6.5% respectively. UAE’s central bank temporarily relaxed limit for net stable funding ratio and advances to stable resources ratio until December 31, 2021, to encourage lending to businesses. Saudi Arabia’s PMI stabilized at 50 in July while UAE’s PMI improved slightly to 50.8. Saudi Arabia’s CPI jumped 6.1% y-o-y in July due to implementation of increase in VAT from 1st July 2020. Fitch has downgraded Bahrain to B+ from BB- with stable outlook, citing marked increases in government debt, GDP contraction and pressure on low forex reserves. Fitch Ratings has also downgraded Oman from BB to BB- with negative outlook in view of continued erosion of fiscal and external balance sheets.

The performance of global equity markets was positive, driven by signs of economic recovery, with the MSCI World Index gaining 6.5% in August. U.S. (S&P 500) gained 7.0% in August supported by favorable economic data, hopes of a vaccine for COVID-19 and gains in tech stocks. The UK (FTSE 100) markets gained 1.1% for the month. Emerging markets increased by 2.1% for the month.

Oil prices closed at USD 45.3 per barrel at the end of August 2020, posting a monthly gain of 4.6%. Though OPEC+ has eased production cuts from August, signs of demand revival indicated by larger than expected draws of U.S crude has helped in maintaining price levels. Iraq has pledged an additional cut in its oil production of about 400,000 bpd in August to compensate for its overproduction during the OPEC production cut. Storms in Gulf of Mexico led to reduction in oil output from the region. U.S-China trade tensions earlier in the month and a downward revision of oil demand forecast for 2020 by both OPEC and IEA have stunted gains. IEA has also cautioned that both aviation and road transport continue to struggle with jet fuel demand being the main source of weakness. Gold prices declined by 0.3% in August. 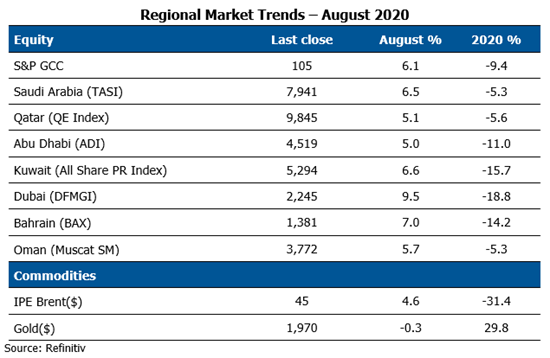