Kuwait Financial Centre “Markaz” recently released its Monthly Market Research report. In this report, Markaz examines and analyzes the performance of equity markets in the MENA region as well as the global equity markets for the month of August 2017.

Markaz report stated that the performance of MENA markets were negative in the month of August. Kuwait (weighted) and Saudi Arabia market indices were the region’s top performer gaining 4.2% and 2.3% respectively during August. These markets benefitted from developments such as the discussions around the potential inclusion of Saudi Arabia and Kuwait in FTSE Russell emerging market index and the possible inclusion of Saudi Arabia in the MSCI emerging market index next year. Qatar declined by 6.4%, making it the worst performing market in August after the ease of selling in July. Qatar’s market came under pressure, as the prospects of an early end to the diplomatic rift appear bleak and renewed worries about the impact of the sanctions on Qatar’s economy emerged.

Value traded in August reflected the negative sentiments in the market, with volume traded decreasing by 16% (MoM) while the turnover in the market declined by 7% (MoM). All MENA markets, barring Kuwait and Oman, witnessed decline in liquidity. Oman and Kuwait bourses evidenced 14% and 7% increase in value traded. The increase in liquidity attributed to buying spree of the investors in both these markets. In terms of valuation, P/E of Morocco (20.2x), Saudi Arabia (15.3x), and Kuwait (14.5x) indices were at premium, while the markets of Bahrain and Dubai trading at 8.7x and 10.1x were relatively cheap among MENA markets.

Blue chips were mostly positive, except the ones from Qatar, which performed negatively in August. Fitch lowered Qatar’s credit rating by one notch to AA-minus with a negative outlook, citing the sanctions. The downgrade threatens higher funding costs for Qatari banks, which account for most of the stock market’s value, as they seek to replace deposits and loans withdrawn by the other Arab states. Zain (12.4%), KFH (10.5%), and Boubyan Bank (9.2%) were the top performers. Kuwait Projects, Masraf Al Rayan and Ooredoo slipped by 13.9%, 8.7% and 8.6% respectively.

GCC Corporate earnings fell by 1% (YoY) during H1 2017 compared to the same period last year. Performance of GCC banking sector was subdued as its earnings remained flat (YoY) at USD 15.2bn in the first half of 2017. Better price realization for petrochemical products enabled commodities sector to post 8% growth in earnings in H1, 2017 (YoY). Saudi Arabia, Bahrain and Kuwait were three countries to put up positive earnings performance growing by 7%, 6% and 2% respectively. Saudi Arabia’s earnings growth was largely helped by the positive momentum in its non-oil private sector while Kuwait was largely helped by the positive performance in the commodities sector and its real estate sector. 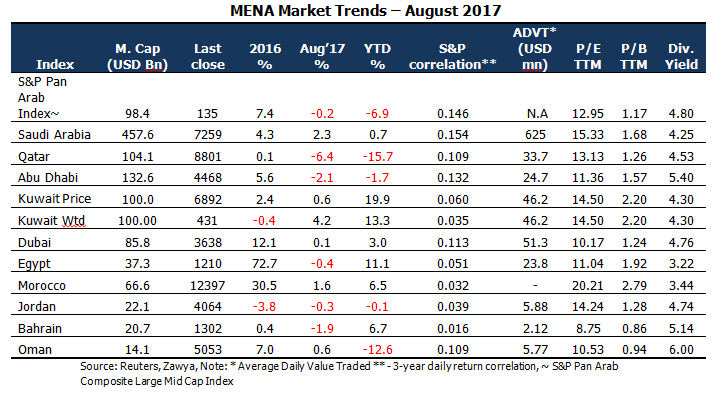