Kuwait Financial Centre “Markaz” recently released its Monthly Markets Review report. Markaz report stated that the S&P GCC Index accelerated its positive rally in the month of April, posting returns of 4.4% as compared to 2.3% in March. As a result, year to date gains increased to 13.5%. At the market level, almost all of the GCC countries posted a positive return for the month except for Oman, which lost 1.0% in April. Saudi Arabia’s Tadawul index topped the leader board with 5.5% gain. Dubai, Abu Dhabi and Qatar’s General index gained by 5.0%, 3.6% and 2.7% respectively in April.

The positive momentum of Kuwait stock market continued with returns of 2.2% registered in the month of April. Kuwait All Share index registered monthly gains for the fourth consecutive month in 2019. Among the blue chips, Kuwait Financial House (KFH) was the top performer for the month, gaining 3.9% followed by National Bank of Kuwait with monthly gain of 3.8%. KFH achieved net profit of USD 201.5mn for the Q1-2019, a growth of 19.4% compared to Q1 of 2018 due to strong growth in core business.

Global equities continued to offer positive returns in April, as evident from MSCI World index that increased by 3.4% during the month. The global economic growth concerns eased off as progress on the U.S.-China trade deal lifted stocks higher. The most recent data from China is also encouraging as industrial output and retail sales increased in March. China’s GDP growth was better than expected at 6.4% in Q1-2019. The U.S. S&P 500 index saw gains of 3.9% in April. U.S. economic growth accelerated in Q1 2019 by 3.2% as opposed to the expected 2.5%. Growth was driven by increasing exports and a narrowing trade deficit. U.S. employment growth also accelerated in April, recovering from 17-month low seen in March. After raising interest rates four times in 2018, the U.S. fed is now dovish on interest rates with some analysts expecting a possible cut by the end of 2019. Stronger than expected growth in corporate earnings also added to the positive momentum.

Oil markets have continued the rally for the fourth straight month in 2019 as Brent crude prices rose by 6.4% to USD 72.8/bbl at the end of April. The oil price year to date gains now stand at 35.3%. Oil prices touched USD 74.57/bbl during the month, which was the highest in six months. It however remains much lower compared to 2018 high of USD 84.16/bbl. Extension of production cut agreement by OPEC and Russia and a sharp decline in output by Venezuela due to blackouts in March ensured continuity in oil price rally.

Kuwait real estate activity picked up pace in 2019. Project awards that had been tepid for several years are on the rise with a series of new contracts awarded and projects being executed. Lending to the real estate sector is on a rise after a period of stagnation. In the medium term, the robust growth in personal loans driven by improvements in consumer confidence and lending to corporates, primarily to real estate and construction sectors could further add to the positive sentiments.

Saudi Arabian Oil Company (Saudi Aramco) raised USD 12 Billion with the help of its first ever-international bond issuance in the month of April. Aramco marketed a U.S. dollar-denominated debt issue split into five tranches with maturities ranging from three to thirty years. The bond issuance follows Aramco's planned acquisition of SABIC from the Saudi sovereign wealth fund. The company received overwhelming demand from investors, as they recorded orders of over USD 100 Billion. The bond has lost its early exuberance as yields have increased since it started trading in the market.

Kuwait’s GDP growth returned to positive territory in 2018, with higher input from its non-oil sectors, increased government investment to boost growth, and improvement in the oil prices. The top ten companies by market capitalization have posted a growth in net income for the year 2018 compared to the previous year. Seven out of the top ten companies belong to the banking industry all of which have registered a double-digit growth in their net profit. 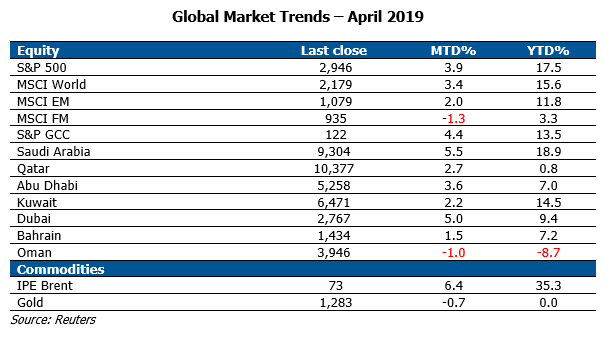