“Markaz” recently released its Monthly Market Research report. In this report, Markaz examines and analyzes the performance of equity markets in the MENA region as well as the global equity markets for the month of October. MENA markets ended mostly in red during the month of October 2015 although global markets strong gains for the same period. Abu Dhabi (-4.0%) suffered the most, followed by Saudi Arabia (-3.8%), Dubai (-2.5%) and Bahrain (-2.0%). Despite the slight increase in oil prices during October, the overall drop of oil prices continue to strain the MENA markets. The regional markets are also responding to instability in the global economy and governments monetary tightening in response to low oil prices.  KSA is contemplating spending cuts and tax increases to manage its fiscal deficit. Egypt (3.1%), Oman (2.4%) and Qatar (1.2%) markets gained in October. Kuwait’s price index ended the month of October with a marginal gain of 0.9%. On the contrary the Kuwait weighted index remained stagnant.

Global equities ended the October month with strong gains after a sharp fall in August and September, which was fueled by fears over the global slowdown, with China as the epicenter. Oil prices rose after the U.S. oil rig count fell for a ninth straight week, indicating potentially lower crude output in coming months in the face of a global supply glut. Subdued worries about slowing Chinese growth, proactive approach of rate cuts by People’s Bank of China to stimulate the economy and investor’s positive response to U.S. Federal Reserve continued lower interest rates low and the European Central Bank further easing are some of the key reasons that fueled the rally of the Global equity markets in October.

The report pointed out that Emirates Telecom (UAE) has benefited from its decision to allow foreign and institutional investors to own its shares from Mid-September and has rallied since then. Despite the drop of 9% in Q3 profits, it managed to be the top gainer (7%) in October, followed by SABIC (KSA) and NCB (KSA) which gained 4.8% and 4.5% respectively. First Gulf Bank (-11.5%), National Bank of Abu Dhabi (-8.6%) and Al Rajhi Bank (-5.9%) were the top three losers in October. With the top three losers being banks, it is evident that banks in the region are grappling with margin pressures and liquidity issues as the oil producing states face a squeeze on budgets from lower oil prices.

Saudi Arabian Government is actively pursuing several initiatives to keep its fiscal budget deficit in check. Saudi Arabia is considering raising domestic fuel prices; the existing system of subsidies in the kingdom is blamed for waste and surging fuel consumption. Saudi Arabia's government was in talks with local banks to sell them 20 billion riyals (USD 5.3 billion) of local currency bonds.

Iran will officially notify producer group Organization of Petroleum Exporting Countries (OPEC) in December of its plans to raise its crude oil output by 500,000 barrels per day (bpd). Kuwait said there were no calls within OPEC to change the oil group's production policy and that lower output from high-cost producers could support prices in 2016, adding to signs OPEC will keep its strategy of defending market share. Meanwhile, OPEC forecast in a monthly report that demand for its oil in 2016 would be much higher than previously thought as lower prices curb U.S. shale oil and other rival supply sources, reducing a global surplus. U.S. oil drillers removed 16 rigs in the week ended Oct. 30, bringing the total rig count down to 578, the least since June 2010. 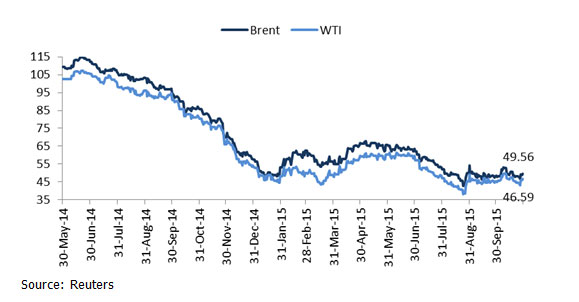 Kuwait Financial Centre K.P.S.C “Markaz”, established in 1974, is one of the leading asset management and investment banking institutions in the Arabian Gulf Region with total assets under management (AUM) of over KD 1.10 billion as of June 30th, 2015 (USD 3.66 billion). Markaz was listed on the Kuwait Stock Exchange (KSE) in 1997.