Markaz: Kuwait Stock Market continues to be the best performer

Kuwait Financial Centre “Markaz” recently released its Monthly Markets Review report. Markaz report stated that GCC markets recovered lost ground in June, as the positive performance of Saudi equities lifted the broader index. Kuwait continued its positive run in 2019, registering gains for the sixth month in succession. Kuwait’s All Share index rose by 1.9% while its Premier market index rose by 2.3% in June. In the first half of 2019, Kuwait emerged as the best performing market with a gain of 19.1%. The rally in Kuwait’s stocks could be attributed to the positive sentiment surrounding MSCI’s decision regarding the reclassification of Kuwait’s market.

On June 25th, MSCI announced its decision to reclassify Kuwait as an emerging market, subject to availability of omnibus account structures and same National Investor Number (NIN) cross trades for international investors before the end of November 2019. Once the final approval is received from MSCI, Kuwaiti stocks are expected to enter MSCI’s emerging market indices on May 2020. MSCI’s announcement to upgrade Kuwait to emerging market status (depending on satisfying certain conditions) is a significant step towards the progression of Kuwait’s equity markets. The move is expected to bring sizeable passive and active fund inflows into the country. Among Kuwait’s Blue Chip companies, Agility and Kuwait Finance House were the top gainers, increasing by 5.3% and 5.0% respectively. Among sectors, Consumer goods index was the top performer in June, increasing by 4.0%.

In the past couple of years, Kuwait’s real estate sector witnessed a slowdown in deals as prices fell amidst low oil prices and weak confidence among investors. However, after a phase of slowdown and consolidation, the real estate activity is picking up in Kuwait. This has translated into higher profitability of real estate companies, thus reversing the declining trend witnessed in the past three quarters.

The S&P GCC composite index gained 2.5% for the month, lifted by the performance of Saudi equities. Saudi Arabia’s Tadawul index led the gains, rising by 3.6%, followed by Bahrain, Kuwait, Qatar and Dubai, which closed 2.6%, 1.9%, 1.8% and 1.5% respectively for the month. Oman and Abu Dhabi indices ended June in the red, losing 1.3% and 0.5% respectively. Saudi Arabia’s index rebounded in June after its successful entry into MSCI’s emerging market indices. According to the IIF, the inclusion is expected to have attracted USD 10.8 billion worth of foreign equity investments into Saudi Arabia. Saudi Arabia’s Tadawul index was the second best performer among GCC markets in the first half of 2019, gaining 12.7% during the year.

Signs were positive in global markets as well, with most markets erasing the losses incurred during the previous month. Next month’s OPEC meeting is expected to have a bearing on the Oil markets, with several members indicating a possible extension of the production cut deal. 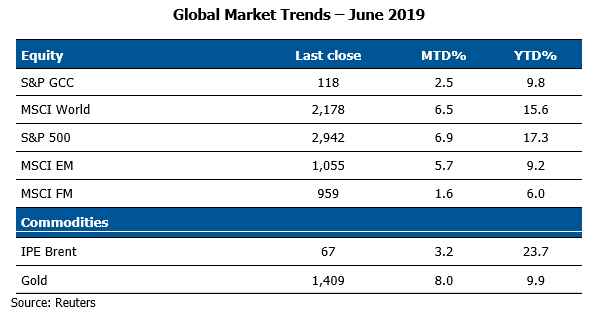