Markaz: Kuwait ended the year as the best performing GCC market in 2019

Kuwait Financial Centre “Markaz” recently released its Monthly Markets Review report. Markaz report stated that Kuwait ended the year as the best performing GCC market in 2019, posting its best yearly returns since 2014. The strong rally in Kuwait equities during the year stemmed from MSCI’s decision to include Kuwait in its emerging market indices from next year. Kuwait markets witnessed sharp yearly gains with its All Share Index gaining 23.7% and its Premier market Index gaining 32.4%. MSCI’s confirmation in December provided the impetus for Kuwaiti stocks to close the year on a high. With an estimated weightage of 0.69% in the MSCI Emerging Market index, Kuwait can expect sizeable passive and active foreign inflows into its equity markets next year. Banking stocks were the biggest gainers among sectors, rising by 35.7% for the year. All of Kuwait’s Blue Chip companies registered sizeable gains during the year, with the market’s two largest stocks Kuwait Finance House and National Bank of Kuwait emerging as the biggest gainers among Blue Chips, rising by 46.0% and 34.7% respectively.

Markaz report added that the year 2019 ended on a positive note for GCC markets as a whole. The S&P GCC index registering yearly gains of 8.3%, with all markets barring Oman posting positive returns. Bahrain was the second biggest gainer among GCC markets, rising by 20.4% in 2019, after a flat performance in the previous year. Dubai, which was the worst performer among GCC markets in 2018, rebounded this year to post gains of 9.3%. On the contrary, Qatar, which was the best performer in the previous year, remained flat with mild gains of 1.2% in 2019. Despite the announcement of a stimulus package to boost Abu Dhabi’s economy in late 2018, its market witnessed only slight uptick of 3.3% in 2019. Meanwhile, Oman’s equity market remained weak, falling for the second consecutive year, down by 7.9% in 2019. GCC’s largest market Saudi Arabia had a topsy-turvy year, ending up with gains of only 7.2% despite its MSCI emerging market inclusion. As investor sentiment was affected by the escalation of geopolitical tensions, Saudi market’s gains were modest. However, 2019 would be remembered as a milestone year for Saudi Arabia as the stock exchange successfully oversaw the World’s largest IPO. Saudi Aramco’s record IPO concluded in December, with the stock touching the coveted USD 2 trillion valuation in the first few days of trading before investors locked in some profits.

Markaz report also stated that among the GCC Blue Chip companies outside Kuwait, Mesaieed Petrochemical Holding Company was the top gainer during the year, with its stock price rising by 67.0%. Emirates NBD ranked second among gainers posting an increase of 51.7%.

Global equity markets were buoyant in 2019 despite concerns surrounding the U.S.-China Trade War. Several global markets closed the year with its main equity indices closing at record highs. The MSCI World Index rose by 25.2%, its best yearly performance since 2014. Similarly, U.S. equities had a stellar year, with the S&P 500 posting yearly gains of 28.9%. Three rate cuts by the U.S. Fed, strong economic fundamentals and the agreement of an interim trade deal with China supported the rally in U.S. equities as the country entered the 11th consecutive year of economic expansion. Risks of a recession seemed to die down as the U.S. sovereign yield curve steepened in December 2019, with the spread between the 2-year and 10-year treasury yields reaching its highest since November 2018. Despite Brexit uncertainties and a political shakeup during the year, U.K. markets (FTSE 100) stood strong with yearly gains of 12.1%. Emerging Market equities were also on the rise, with the MSCI EM Index posting closing the year 15.4% higher.

Oil prices closed at USD 66.0 per barrel in 2019, which would translate to a gain of 22.7% compared to the end of previous year. Supply side disruptions and the deepening of production cuts by OPEC balanced concerns from the demand side, as Oil prices stabilized in the last quarter of 2019. With fears of recession raising concerns among global investors, Gold prices witnessed a rally during the year, with its YTD gains peaking at 21.1% during September 2019 before settling down 18.3% at the end of the year. 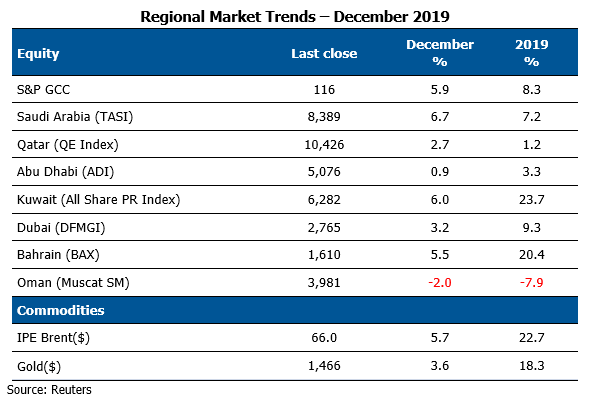