Markaz: Industries Qatar leads the top GCC M&A transactions during Q3 2020 with the acquisition of a minority stake in Qatar Fertiliser Company

Qatar's industrials sector leads the top GCC M&A transactions during Q3 2020 as per a report recently issued by the Investment Banking Department at Kuwait Financial Centre “Markaz”. Industries Qatar announced they intend to acquire an additional 25% stake in Qatar Fertiliser Company (“QAFCO”) for a total consideration of USD 1.0 billion. QAFCO was established in 1969 as a joint venture between the Qatari government and a number of foreign investors with an aim to diversify the economy and utilize the nation’s immense gas reserve. Moreover, the company’s current shareholding structure is as follows: Industries Qatar (75%), Qatar Petroleum (25%). Upon the successful completion of this transaction, Industries Qatar would increase its total ownership to 100%, becoming the sole owner of QAFCO.

The second largest transaction involves National Petroleum Construction Company (“NPCC”) and National Marine Dredging Company (“NMDC”), who are in the midst of evaluating the opportunity to combine their operations upon receiving an offer from General Holding Corporation and other minority shareholders of NPCC. The key terms of the offer states that NPCC shareholders will transfer NPCC to NMDC in exchange of the issuance of an instrument that is convertible into 575.0 million ordinary shares, or 70% of NMDC’s issued share capital. At a convertible share price of USD 1.2, the transaction would result in an estimated value of USD 688.8 million.

Moreover, Raha AlSafi Consortium has been awarded a bid for the First Milling Company, one of four milling companies to be privatized by the Saudi government, for a total consideration of USD 540.0 million. The consortium is comprised of the following parties: Almutlaq Group, Al Safi Abunayyan Holding and Essa Al Ghurair Investment Company. The next transaction oversaw Delivery Hero acquire 100% of Instashop, a leading online grocery platform, for a total consideration of USD 360.0 million. It is worth noting that this value is comprised of two components including a cash payment of USD 270.0 million and a deferred payment of USD 90.0 million, which is dependent on meeting certain milestones. Lastly, the UAE’s Edge Group announced its intention to acquire a 40% stake in Advanced Military Maintenance Repair and Overhaul Center (“AMMROC”) for a total consideration of USD 307.0 million. AMMROC offers maintenance, repair & overhaul and support services for fixed and rotary wing military aircraft in the MENA and South Asian regions.

Furthermore, GCC acquirers actively acquired both regional and international companies, whereas in the previous quarter, they primarily invested in the regional market. With that being said, GCC acquirers closed a slightly lower number of transactions relative to Q2 2020. Throughout Q3 2020, GCC acquirers closed a total of nine transactions that involved international companies, which is 31% lower in comparison to Q2 2020, which oversaw a total of 13 closed transactions that involved foreign targets. Moreover, Saudi and UAE buyers each accounted for 30% of these transactions, followed by Bahraini, Kuwaiti and Qatari acquirers, who accounted for the remaining transactions. Lastly, Omani acquirers did not close any cross-border transaction throughout the quarter.

The GCC market received a slightly weaker level of interest from foreign buyers in Q3 2020 when compared to the previous quarter. Throughout Q3 2020, foreign buyers closed three transactions whereas in Q2 2020, they completed five transactions, which translates into a 40% decline quarter-over-quarter and a 67% decline year over year. The UAE continued to be the most attractive target out of the regional markets, which is a trend that has persisted throughout the past few quarters. It is worth noting that all closed transactions throughout the quarter purely targeted UAE companies.

By the end of Q3 2020, there was a total of 23 announced transactions in the pipeline, which is significantly higher relative to Q2 2020. As witnessed last quarter, the majority of these transactions involved Saudi and UAE targets, each of whom accounted for 35% of the total number of deals announced. The remaining transactions primarily included Kuwaiti and Qatari targets whereas Bahrain and Oman each announced one transaction throughout the quarter. 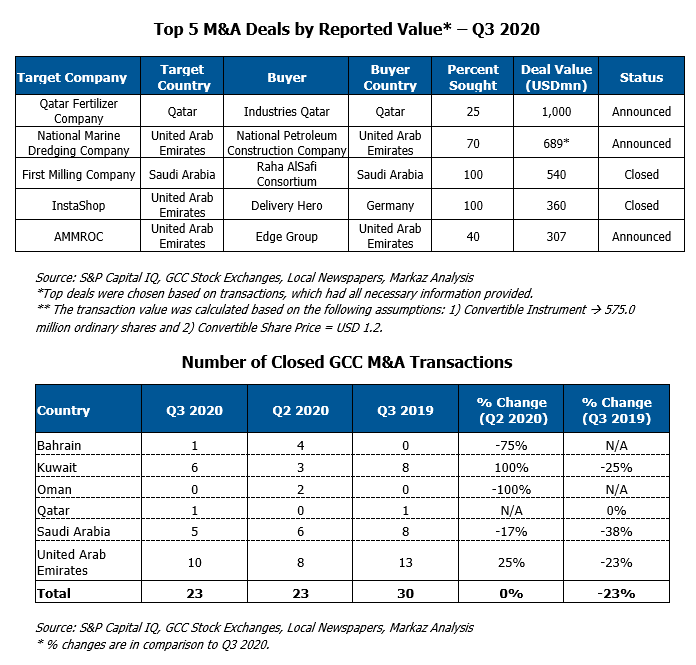 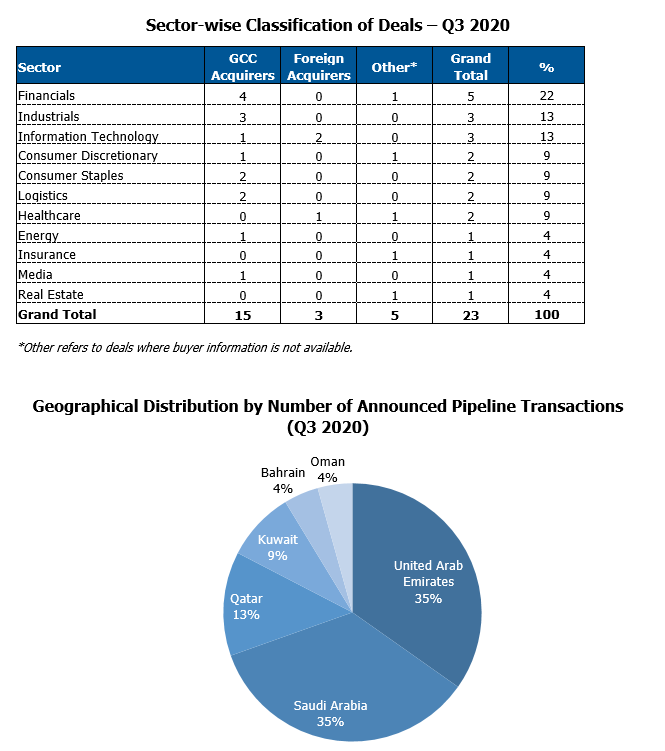