Markaz: Global and GCC equities continue their recovery in June

Markaz report stated that Kuwait markets were positive, with the Kuwait All Share index registering gains of 2.7% in June. Relaxation of curfew regulations and the rebound in oil prices contributed to the positive sentiment of investors. Morgan Stanley Capital International (MSCI) announced that they would implement the reclassification of Kuwait indices from frontier market status to emerging market in November 2020 along with the semi-annual index review. Meanwhile, Kuwait cabinet agreed to cut the government entities' budget for fiscal year 2020-2021 by at least 20% to soften the deficit caused by COVID-19 outbreak. Agility was the top gainer for the month of June among Kuwaiti Blue Chips, gaining 11.2%. During the month, Agility signed a mega agreement with the Kuwaiti Public Authority for Housing Welfare (PAHW) to develop industrial and storage zones in Sabah Al Ahmed residential city. Basic materials and Industrials were the top performing sectors in Kuwait during the month, with their indices rising 9.2% and 7.8% respectively.

Regionally, the S&P GCC composite index rose by 1.6% in June, with all GCC markets barring Oman registering gains. Dubai was the top gainer among GCC markets, rising 6.2% for the month, followed by Abu Dhabi, Kuwait, Qatar and Saudi Arabia, which gained 3.5%, 2.7%, 1.7%, and 0.2% respectively. The World Bank in its recent report stated that GCC economies will contract 4.1% in 2020 but will bounce back in 2021 with 2.2% growth. Saudi Arabia turned to their mining industry to supplement its economic recovery. The country's cabinet approved a new mining law that facilitates investor access to financing and supports exploration and geological survey activities. The law falls in line with Saudi Arabia aims to diversify away from hydrocarbons by increasing foreign investment in the mining sector.

Markaz report also stated that among GCC Blue Chip companies outside Kuwait, Etisalat and International holding company were the top gainer for the month, increasing 5.0% and 4.9% respectively.

The performance of Global equity markets was positive for the third consecutive month, with the MSCI World Index gaining 2.5% in June. U.S. equities (S&P 500) gained 1.8% despite the second wave of cases starting to spike in several states. The Federal Reserve decided to keep interest rates unchanged during its June meeting and indicated that they would maintain rates at near zero levels until the economy recovers. The U.S. Fed expects the U.S. GDP to decline by 6.5% in 2020 before bouncing back in 2021 by 5%. In addition, the apex bank affirmed its commitment to keep buying bonds, targeting USD 80 billion a month in Treasury securities and USD 40 billion in mortgage-backed securities. The UK (FTSE 100 index) markets stayed positive, gaining 1.5% for the month. The Bank of England (BoE) during its June announcement said that it would expand its bond-buying program by USD 123 billion and keep its key interest rate at a record low of 0.1%. Emerging markets were buoyant for the month, with the MSCI EM increasing by 7.0%.

Oil prices closed at USD 41 per barrel at the end of June 2020, up by 16.5% as OPEC members and allies tightened output while the outlook for energy demand rose due to easing of restrictions on lockdowns. Gold prices continued to rise steadily, increasing 3.1% in June as fears over a second wave increased the demand for the safe haven asset. 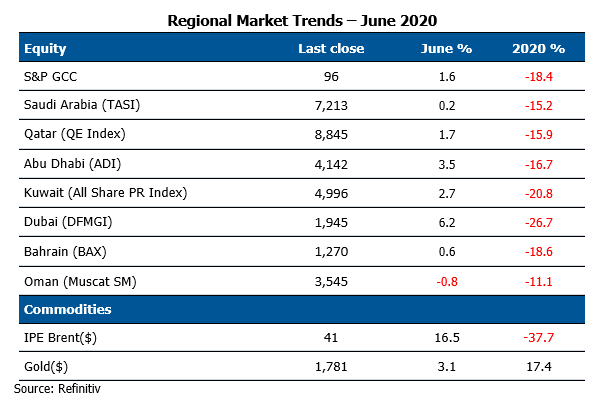