Kuwait Financial Centre “Markaz” recently released its Monthly Markets Review report. Markaz report stated that after a fabulous January where S&P GCC Index zoomed by nearly 7%, the month of February marked a pull back where the index retreated by 1%. At market level, various GCC market indices diverged during the month with Dubai being the leading gainer, surging by 2.7%. Abu Dhabi, Bahrain and Kuwait also ended the month positively, gaining 1.8%, 1.5% and 0.5% respectively. Oil and Gas sector was the key contributor of Kuwait market performance, rising by 5.9% during the month. On the other hand, Qatar index was 5.7% down for the month. Saudi Arabia’s Tadawul and Oman’s Muscat exchange registered a decline of 0.8% and 0.5% respectively. Among the blue chips, Agility emerged to be the best performer in Kuwait, gaining 6.1% during the month. Boubyan Bank on the other hand wiped out its gain in previous month as it declined by 5.9% during February. National Bank of Kuwait on the other hand extended YTD returns to 4.8% and continue to benefit from the removal of restrictions on foreign ownership cap of 49% on domestic banks.

Markaz report pointed out that globally, easing of U.S. China trade concerns and the prospect of reaching a trade deal buoyed the equity performance. In the FOMC meeting, U.S. Fed reiterated its stand to keep the interest rates on hold, which added further impetus to the rally. As a result, U.S. S&P 500 index extended its gain for the year to 11.1%. China‘s Shanghai A-Share index surged by 13.8% in February as conducive policy environment, easing concerns pertaining to trade war and  improving sentiments resulted in increased inflows. Emerging markets continued the strong momentum during the month of February, retracing back by more than half from the decline in 2018.

Oil markets continued the strong rally for the second month in a row after a subdued performance in last quarter of 2018. Oil prices rose by 6.7% during the month. Oil price movement remains volatile however the production cuts led by Saudi Arabia and the falling exports from Venezuela pushed the price upwards as rise in production elsewhere fell short of balancing the market. Goldman Sachs predicts Brent crude oil price to touch $70-$75 price range during the year as the market is expected to further tighten in the coming months. The year-end targets are however at $60 per barrel.

In a closed bidding process to privatize the Boursa Kuwait, a Consortium comprising of listed companies along with international market operator Athens Stock Exchange (ATHEX), have been awarded the bid for a 44% equity stake. Post the deal, the new shareholding of Boursa Kuwait would include 6% stake by PIFSS, and remaining is likely to be sold to public through an IPO.

With the economic recovery underway, Markaz report has identified the list of companies that are undervalued as indicated by the low P/E ratio and may be a worthy addition in an investor’s portfolio particularly those belonging to banking and real estate sector. Most of the companies belonging to these sectors have registered growth in earnings over the past five years while none of the companies have provided returns close to what an investor would have expected based on earnings growth.

The UAE property sector that accounts for 16% of its total GDP is expected to attract new wave of investors owing to the various initiatives introduced by the government. This includes the 10 year visas for expats, five year visas for retirees and 100% ownership for foreign businesses. 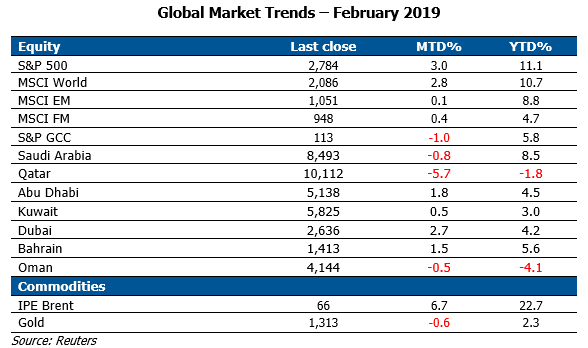