Kuwait Financial Centre “Markaz”, in its recent research report titled GCC Bonds & Sukuk Market Survey, has highlighted the trends pertaining to Bonds and Sukuk primary issuances in the GCC region during 2019. The report includes analysis of the Bonds and Sukuk market in the GCC, which are issued by Sovereign and Corporate entities for financing purposes. The report also covers local issuances by Central Banks in the GCC, which are primarily utilized as tools of monetary policy.

The debt capital markets in the GCC comprise of Bonds and Sukuk issued by governments, corporations or financial institutions for financing purposes, and are denominated in either in local or foreign currencies. During 2019, a total of USD 114.172 billion was raised in the GCC sovereign and Corporate Bonds and Sukuk market, an increase of 24% from USD 91.872 billion raised during 2018. UAE entities were the top issuers in terms of total value issued.

The first half of 2019 recorded the highest value of GCC issuances with total value of USD 65.031 billion through 229 issuances, while a total of USD 49.141 billion was issued in the second half through 180 issuances.

Sovereign vs. Corporate: Corporate issues contributed to 54% to the overall market with a total value of USD 61.272 billion, as compared to USD 45.684 billion raised during 2018. Sovereign issues raised a total of USD 52.900 billion through primary debt issuances, an increase of 15% from USD 46.187 billion raised during 2018. The Saudi Government has issued debt of USD 23.950 billion, of which USD 10.560 billion (SAR 39.62 billion) raised through domestic issuances and USD 13.390 billion of Bonds and Sukuk in US Dollar and Euro. The Government of Qatar issued Sovereign bonds totaling USD 12.000 billion during 2019, with maturities of 5, 10 and 30 years, whereas the Emirate of Abu Dhabi issued Bonds and Sukuk amounting to USD 10.000 billion and the Emirate of Sharjah issued Bonds and Sukuk amounting to USD 1.950 billion during 2019.

Maturity Profile: Issuances with tenors of less than 5 years slightly dominated the GCC debt capital markets by total value, raising a total value of USD 37.612 billion through 273 issuances and contributing to 33% of total primary issuances. Issuances with tenors of 6-10 years raised a total of USD 36.452 billion through 55 issuances, where it contributed to 32% of the total.

Rating: In terms of value, a total of 81% of GCC Conventional and Sukuk bonds were rated in 2019 by either one of the following rating agencies: Standard & Poor’s, Moody’s, Fitch and/or Capital Intelligence, of which 73% are categorized as Investment Grade-rated.

Listing: During 2019, 93% of the total issuances or 260 issuances of Bonds and Sukuk in the GCC were listed on exchanges, with an aggregate value of USD 106.221 billion. London is the listing exchange with the greatest traded value of GCC primary issuances during 2019, totaling USD 45.451 billion through 89 issuances. 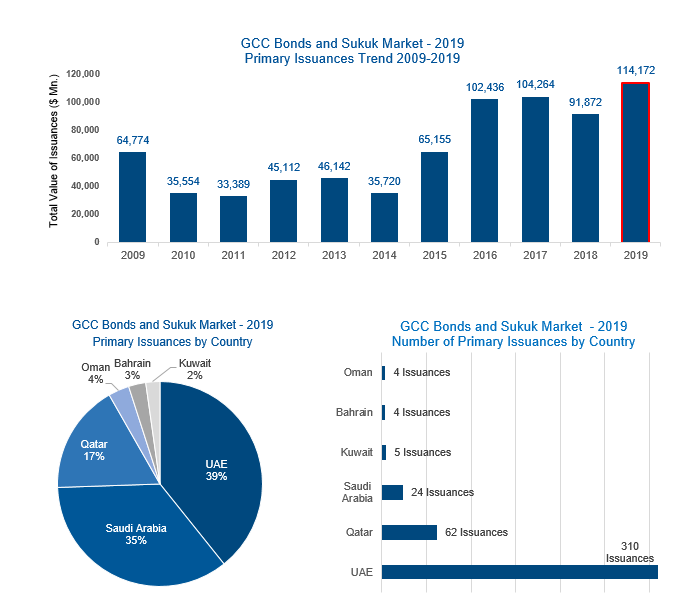 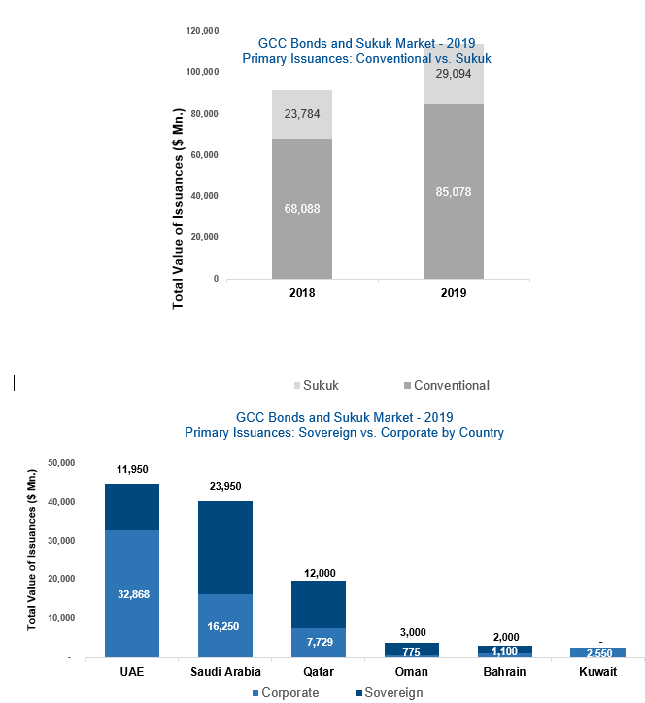