Markaz: GCC Markets lifted by the rally in UAE and Kuwait equities

Kuwait Financial Centre “Markaz” recently released its Monthly Markets Review report. Markaz report stated that GCC markets ended the month of July on a positive note, aided by the strong performance of Dubai and Abu Dhabi markets. Kuwait continues to be the best performing market in the GCC region in 2019 with YTD gain of 20.4%.  Kuwait’s All Share index rose by 4.9% while its Premier market index rose by 5.8% in July. The impact of the MSCI upgrade process on the market has been clearly visible, and could continue to have a positive impact on Bourse Kuwait in the period leading to the implementation and potentially even beyond. Among Kuwait’s Blue Chip companies, Mobile Telecommunications Company (Zain) and Kuwait Finance House were the top gainers, increasing by 9.3% and 9.2% respectively. Among sectors, Telecom index was the top performer in July, increasing by 8.3%.

With Kuwait recognized as an emerging market by global index providers FTSE Russell, MSCI and S&P Dow Jones, Kuwait focused ETFs have started listing outside the Middle East has for the first time. This could be a positive trigger for the markets and potentially lead to a wide range of instruments becoming available for foreign investors. Likewise, Kuwait’s retail market has witnessed positive changes in recent times and is set to capitalize on the rise of consumerism due to favorable demographics, a rise in population and a strong growth trajectory in tourism and per capita income. The value of non-store retailing is forecast to increase by 48% in Kuwait between 2018 and 2023. With average mall occupancy levels at 93% and several supermarkets in the pipeline for 2019, Kuwait’s retail sector is poised for solid growth.

The S&P GCC composite index gained 1.1% for the month, lifted by positive performance from UAE and Kuwait markets. The emirates of Dubai and Abu Dhabi led the gains, rising by 9.8% and 6.8% respectively, followed by Bahrain, Kuwait and Qatar, which closed 5.2%, 4.9% and 0.5% respectively for the month. Saudi Arabia and Oman were the only indices that ended the month of July in the red, losing 1.0% and 3.2% respectively. Dubai Stock Exchange was the best performer for the month of July and the Abu Dhabi stock market which closely followed behind, have been gaining momentum in 2019. After Dubai’s benchmark stock index lost almost half its value in the past five years, it is finally beginning to attract investors on the lookout for bargains. In its latest efforts to attract foreign investment, the UAE government is preparing a draft law that would allow foreigners to own up to 100% of businesses in the maritime industry in accordance with specific criteria.

The global markets as well as the US indices registered gains during the month as the Fed is expected to cut interest rates for the first time in more than a decade. Oil prices witnessed downward pressure even though OPEC decided to extend production cuts into 2020, due to the shadow cast by the negative outlook towards global demand growth and the consistent rise in output from America fields. 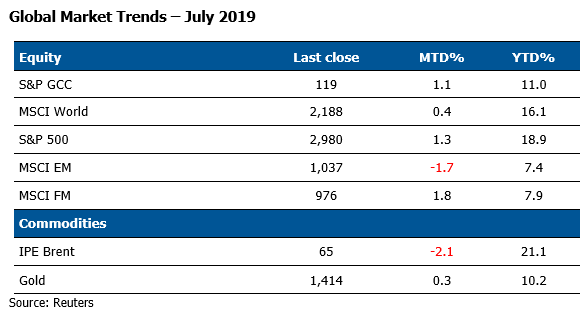