Kuwait Financial Centre “Markaz” recently released its Monthly Markets Review report. Markaz report stated that GCC markets ended the month of August in negative territory, affected by the weakening of oil prices amidst growing concerns surrounding the U.S.-China trade war. Except Oman, all other GCC markets registered a decline in August. Despite a fall of 2.9% during the month, Kuwait continues to be the best performing market in the GCC region during 2019 with YTD gain of 21.3% at the end of August. The MSCI EM status has brought the regional markets closer to the global markets and are therefore more responsive to global market movements.

Kuwait blue chip companies have had a very successful year so far with all the top ten companies by market capitalization, registering double-digit growth in their share price performance so far in 2019. In August however, some of the gains were wiped out. Agility and Boubyan Bank were the top losers among the blue chips, falling by 5.9% and 5.1% respectively. While majority of the sectoral indices posted a monthly decline, Technology index surged by 12.7% to become the top performing index for the month. Basic material sector was the worst performer, declining by 6.6%.

In Kuwait, the fall in the total project awarded by government as a consequence of the decline in oil prices since 2014 and subsequent fiscal pressure has reduced the loans and advances towards real estate and construction activity. The total claim of local banks in Kuwait (includes 10 listed banks) on private sector stood at KD 37.9bn (USD 125.7bn) as of latest available data. Going forward, the credit growth is likely to remain modest when compared with the pre-oil slump years. Personal loans could be the primary driver of credit growth as a result of increase in borrowing limit to up to 25 times of the borrowers net monthly salary or a maximum of KD 25,000, up from 15 times or a maximum of 15,000 KD earlier.

Regionally, the S&P GCC composite index fell by 5.8% for the month, dragged down by volatile oil prices and subsequent negative performance in most of the markets including Saudi Arabia and Kuwait. Oman was the only positive performer, rising by 6.5%. Saudi Arabia led the long list of decliners, falling by 8.2%, followed by Dubai and Kuwait, which closed 5.5% and 2.9% lower respectively for the month.

Markaz report stated that majority of the GCC Blue Chip companies registered a decline during the month. Among GCC blue chips, National Commercial Bank was the top loser, declining by 13.2%, followed by Al Rajhi bank that declined by 12.1%. DP World further extended its losses in August and become the top loser among UAE blue chips with a price decline of 9.1%, followed by First Abu Dhabi Bank which declined by 3.9%. Saudi Basic Industries Corporation (SABIC), the largest company by market cap among GCC countries also declined by 7%. Mesaieed Petrochemical Holding Co was the top gainer, surging by 9.2% for the month.

Despite the Fed reducing the interest rates for the first time in more than a decade, the global markets as well as the US indices also registered loss during the month. Oil prices also witnessed downward pressure even after OPEC decided to extend production cuts into 2020. The uncertainty stemming from trade war and growing concerns of economic slowdown are the primary reason behind the bearish market. 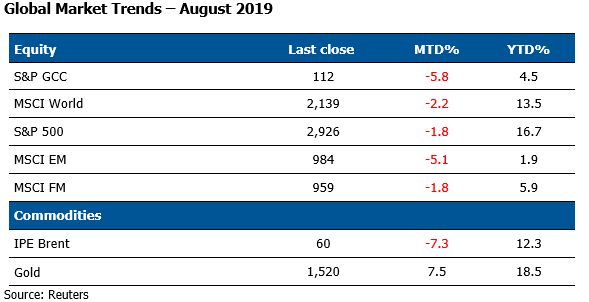