Markaz: Economic Growth in Kuwait expected to be subdued at 2.5% in 2016

Kuwait Financial Centre “Markaz” recently released its outlook on Kuwait stock market for the full year of 2016. In this research report, Markaz analyses the performance of Kuwait stock market in 2015 and provides an outlook for 2016 based on corporate earnings potential, valuation attraction, economic factors and market liquidity.

Markaz report was neutral for Kuwait markets in its last year assessment. Kuwait indices registered negative returns as continued fall in oil prices and subdued corporate earnings growth weighed on the stock markets. In 2015, Kuwait Weighted index and the Kuwait price index dropped by 13.0% and 14.1% respectively. However, despite the decline, the report sees the valuations for Kuwait market are still at a premium compared to its regional peers.

Most sector indices in Kuwait financial market registered losses with varying degrees. Sectors which had direct linkages to the impact of lower oil prices in the form of subdued government spending, slower deposit mobilization, moderate credit offtake were most affected. Oil & Gas index lost 32.7% while financial services declined 24.6%. On the other hand, service sectors such as insurance and healthcare were relatively resilient. Insurance sector gained 9.8% while healthcare was flat.

Economic growth in Kuwait is expected to be subdued at 2.5% (real GDP growth) in 2016 in view of lower revenues from oil. Series of contract awards and accelerated implementation of Kuwait Developmental Plan (KDP) is expected to support non hydrocarbon activity, whose growth is expected to be at 4.5% in 2016. Muted earnings expectation and lack of near-term triggers for valuation multiple re-rating could result in yet another year of tepid market performance.

Going forward, the report evaluates the attractiveness of the Kuwait stock market based on four-factor model.

Price-to-earnings multiple for Kuwait currently stands at 14.4x, a 5-year low for Kuwait. However, the index P/E in comparison with other major GCC markets such as UAE (P/E 10.4x), Qatar (P/E 11.1x) and KSA (P/E 13.0x) is trading at a premium. Despite the high level of P/E, the report remains Neutral on Kuwait market from a valuation perspective due to other factors such as attractive P/B (1.1x – second lowest in GCC) and dividend yield (4.3%).

Given the declining oil prices, the report anticipates the earnings from the commodity sector to shrink further in Q4 2015 leading to lower corporate earnings in Kuwait. The report estimates the earnings in 2015 to be USD 5,071mn (7% lower than previous year) compared to USD 5,453mn in 2014. The report’s forecast for Kuwait’s earnings in 2016 suggests a modest 1% increase, mainly due to the better performance of the banking industry compared to other sectors. Banking industry is expected to grow at 5% in 2016 with the revival of the investments to sustain the credit growth in Kuwait. Earnings potential of Kuwaiti banks can help to offset the declining earnings in commodity and telecommunication, as banking industry contributes 50.2% of total earnings in Kuwait. As lower commodity prices, especially oil, are expected to prevail in 2016, the report expects decline for commodities segment in 2016. Accelerated execution of various projects that were awarded as part of KDP holds key for revival of corporate earnings in Kuwait. As the growth expectations for corporate earnings are muted, the report rates Kuwait as neutral on earnings parameter.

The lower fiscal break even oil price for Kuwait at USD 51.8/barrel in 2016 will provide comfort to the fiscal balance, though it would be lower than fiscal surpluses registered before the fall of oil prices. Kuwait with low debt and higher fiscal reserves, accumulated during periods of elevated oil prices, could resort to raising debt in the domestic market, international market or draw down on its buffers or a mixture of both as the rebounce of the oil prices remain uncertain.

Kuwait stock market suffers from one of the poorest liquidity in the region. Value traded declined by 45% in 2015 as a result of which the stock turnover also declined to 12% compared to 22% in 2014, lowest in recent memory. Kuwait stock exchange is plagued by a series of delisting and the liquidity has successively worsened in the past 3 years. This probably is one of the lowest trading activities in its history.

Lack of IPOs in Kuwait is an added factor leading to lower liquidity levels and turnover in the bourse. Lack of retail interest and investor participation as evidenced by lower credit disbursals towards purchase of securities in the recent years has also reduced liquidity in the bourse. The report anticipates the value traded and turnover ratio to improve in 2016 aided by the low base effect.

Sluggish growth in past two years and uncertainty prevailing over the oil prices have led to slower recovery of the Kuwaiti economy. Earnings of Kuwait companies, mainly the commodities and telecommunications are expected to deteriorate in 2016 and the earnings growth in banks is also expected to slow down. The valuation measured by P/E ratio at 14.4x looks high compared to other markets. Market liquidity is at its lowest. Given the lacklustre performance of the Kuwait stock market during the last few years, the report does not see any major negative triggers (low base effect) while it also doesn’t see any major positive triggers with low oil prices acting as a dampener. Hence, the outlook remains neutral for 2016. 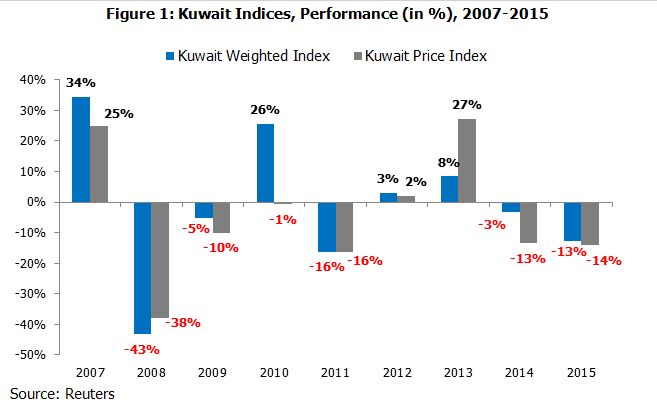 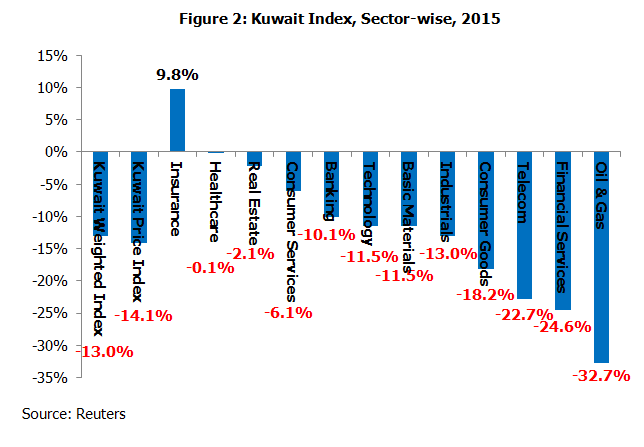 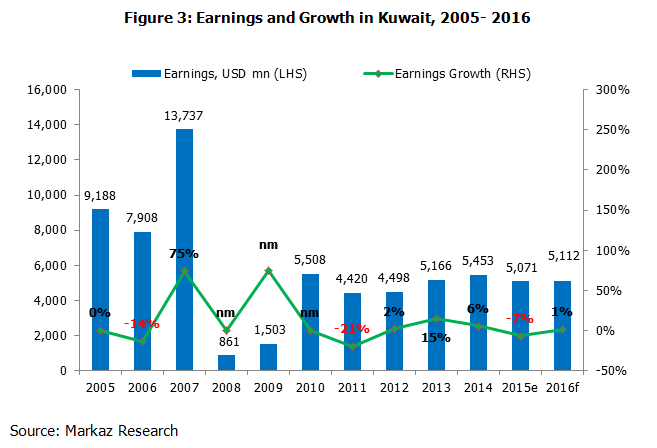 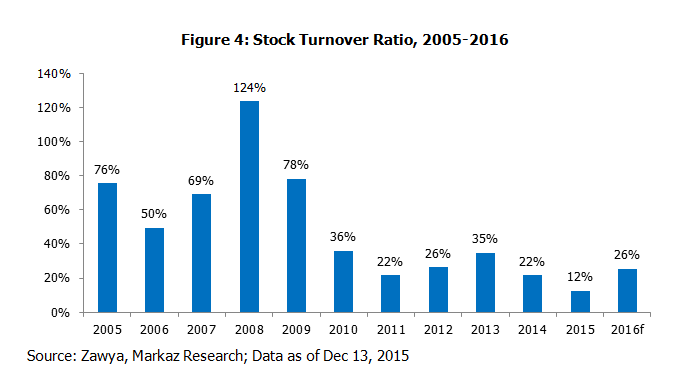 Kuwait Financial Centre K.P.S.C “Markaz”, established in 1974, is one of the leading asset management and investment banking institutions in the Arabian Gulf Region with total assets under management (AUM) of over KD 1.05billion (USD 3.47bn) as of September 30th, 2015. Markaz was listed on the Kuwait Stock Exchange (KSE) in 1997.