Kuwait Financial Centre “Markaz” recently released its Monthly Market Research report. In this report, Markaz examines and analyzes the performance of equity markets in the MENA region as well as the global equity markets for the month of May.

May was a negative month for MENA indices, barring Jordan, as investors continued to book profits in the absence of positive cues, and fund managers proved cautious over Fed rate hike speculation. Jordan (1.6%) was the lone survivor, followed by Kuwait Price (0.2%) and Bahrain (0.1%), while Kuwait weighted index declined 2.4%, because of selling pressures in the Financial Services and Telecommunications sectors. Abu Dhabi (6.5%), Qatar (6.4%), Saudi Arabia (5.3%) and Dubai (5.1%) fell in May, marking it as the worst month since January this year. Brent crude continued to climb in May, closing at USD 49.69 per barrel, after surpassing USD 50 per barrel in the month; the first time since Nov’15.

S&P GCC also declined by 5.1% in May, to close at 90 points. Worries over contraction in the construction industry and possibility of rise in provisions and non-performing loans in regional banks made investors wary of taking long-term positions in banking and construction shares, despite positive Q1 results for the former.

Most Blue Chips ended the month of May in red, barring Emirates NBD (UAE) and Saudi Electricity (SEC, KSA). Emirates NBD entered into a co-location agreement with Du that will help optimize operational expenses, and provide direct access to vital data center ecosystem. The Saudi government is reviewing plans to break up SEC into four divisions, as part of a drive to privatize the utility. NBAD (UAE, -12.2%) and Ooredoo (Qatar, -10.6%) stocks had a poor streak in May. Financial institutions in Abu Dhabi are witnessing tightening liquidity conditions due to weaker energy revenues, prompting NBAD to look beyond domestic operations for revenue. Ooredoo posted a Q1 revenue of USD 2.16bn, down 2% from 1Q15, as revenues from the voice segment contracted. Arabtec Holding (UAE) declared a loss of USD 12.6mn for the first quarter of the year, as the company struggles with a difficult environment, due to slowdown in Gulf economies and governments restraining spending because of low oil prices. Ongoing expansion of projects and comprehensive development plans on facilities and assets have helped Ezdan Holding Group (Qatar) record a USD 161mn first-quarter net profit, a 12% growth compared to the USD 143.5mn posted in 1Q15.

Saudi Arabia announced a string of reforms to its stock market in a bid to attract billions of dollars of foreign investment, and to facilitate the smooth sales of state assets, as the kingdom grapples with deficit caused by low oil prices. In Jun’15, the Saudi CMA took a cautious approach to market reforms, however, in May’16, more reforms were announced to aggressively court foreign investors.

In May 2016, the kingdom announced a cut to the amount of assets foreigners must have under management to invest directly in the nation’s stocks to USD 1bn from USD 5bn in Jun’15. The CMA will also now accept investments from sovereign wealth funds and university endowments. The exchange will also amend its settlement cycle to T+2 (from T+0) for share trading, bringing it in line with European markets. Each of the foreign institutional investors (FIIs) will be allowed to own directly a stake of just under 10 per cent of a single listed company, up from a previous ceiling of 5 per cent. Other restrictions were scrapped, including a ceiling of 10 per cent on combined ownership by foreign institutions of the market's entire capitalization. All foreign investors combined will still be limited to owning 49 percent of any single firm.

Saudi CMA has also approved the introduction of securities lending and covered short selling to the stock market, which would give investors more options to hedge their purchases against market downturns. The changes will be effective before the end of the first half of 2017.

Brent crude crossed the USD 50 per barrel in the month of May, the first time since Nov’15, before climbing down marginally, and closing the month at USD 49.69 per barrel, up 3.2 per cent from last month’s close. Supply disruptions in Nigeria, Canada and Venezuela, and stronger overall demand has led to rise in price of the oil this month. Investors brushed aside concerns regarding higher Middle East output, as fight for market share between Saudi Arabia and Iran is on the cards. 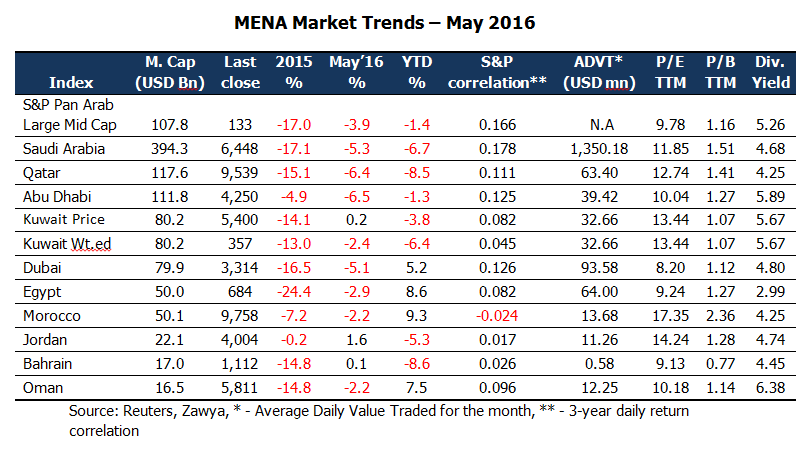 Kuwait Financial Centre K.P.S.C “Markaz”, with total assets under management of over KD 1 billion as of December 31, 2015 (USD 3.38 billion), was established in 1974 and has become one of the leading asset management and investment banking institutions in the Arabian Gulf Region. Markaz was listed on the Kuwait Stock Exchange (KSE) in 1997.