Aggregate net profits for banks came in at USD 16.7bn in 1H15, a rise of 9% over 1H14. Earnings from real estate came in at USD 3.7Bn recording a growth of 44.5% (YoY). Robust growth in the earnings of banking sector, which accounts for 49% of earnings, could not prevent overall corporate earnings from declining by 7.2% (YoY) in 1H15. Telecom sector continued its negative run from 2014, with overall profits declining by 35%.

Qatar had the highest earnings growth in 1H15 at 13%, with the rest of the GCC countries recording a decline. Fall in oil prices, strengthening US dollar and company specific issues were responsible for the poor earnings in the first half of 2015. Earnings in Kuwait and Saudi Arabia contracted by 19% and 16%, respectively, (1H15, YoY basis), while UAE, Bahrain and Oman also registered negative earnings growth of 2%, 5% and 7%, respectively.

Real Estate and Banking sectors have been the star performers in the region for 1H15 registering growth of 44.5% and 9%, respectively. Despite signs of slowing down towards the end of last year, the real estate sector had a great run in the first half of 2015. The commodities sector, which is the second largest sector in terms of net earnings, was impacted by lower oil prices. Telecom sector, the 4th largest in terms of net earnings was affected by the reduction in ARPUs (Average Revenue per User), as well as company specific losses.

Real estate boom in major markets such as UAE (Dubai & Abu Dhabi), Qatar and introduction of mortgage lending reforms in Saudi Arabia have led to significant earnings growth of the sector. Telecommunications sector’s earnings were affected by strengthening of the US dollar (Ooredoo), the earnings restatement of Mobily and its continued dispute with Zain Saudi. Falling ARPU across the region was also a reason behind the fall in telecom earnings. 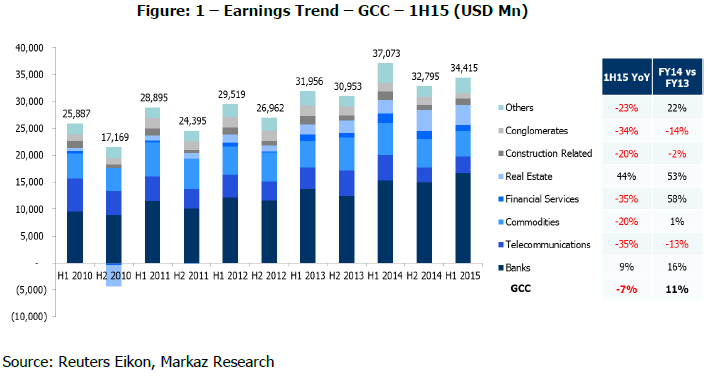 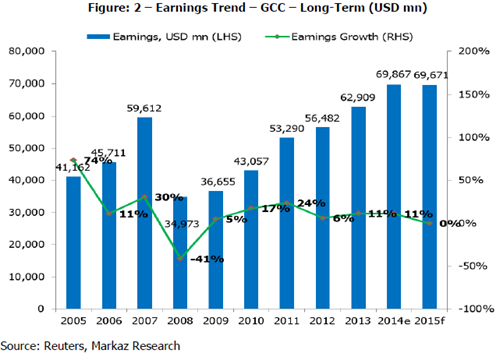 Established in 1974, Kuwait Financial Centre K.P.S.C “Markaz” is one of the leading asset management and investment banking institutions in the Arabian Gulf Region with total assets under management of over KD 1.107 Billion (USD 3.66 Billion) as of 30th June 2015. Markaz was listed on the Kuwait Stock Exchange (KSE) in 1997.