Kuwait Financial Centre “Markaz” in its recently released research note has analyzed the rise and fall of property market in Dubai to investigate the excesses that lead to the fall and examined the possibility of Dubai like situation emerging in other GCC countries.

The phenomenal growth in Real Estate activity in Dubai often proved those who claimed they have seen the peak wrong until the last two quarters of 2008. Rise in asset prices due to healthy demand prospects and appropriate funding facilitated by adequate liquidity transforms into a bubble due to excesses in demand expectations, leverage and speculation.

Contagion could happen only in countries/regions where there are excesses in financing, speculation and demand expectations in the sector similar to the extent in Dubai. The perception of a speculation driven rise in prices in a country/city keeps investors at bay as they wait for clarity to separate speculative markets from a real demand driven market. The uncertainty would be short lived if the fundamentals are strong and appropriate financial conditions exists to adequately lubricate. However, the task to alienate a speculative market from a vibrant demand based market is no easy a task and hence concluding a market to be speculative can at best be an informed opinion.

While the presence of all factors mentioned in the asset price bubble path section is necessary for a creation of a bubble, a burst can be caused due to factors external to the sector like a fall in the overall economic activity, negative capital flows etc. The correction in prices would be organized and less painful if any of these excesses are controlled by the authorities or the market forces.

The real estate sector’s contribution to Dubai’s GDP spiked up to 15% in 2006 from its six year average of c.10% (Exhibit-2) and we expect that to have gone up to c.18% in 2007. As per our estimates, 50% of Dubai’s c. 1.2 million workforce are in the construction and real estate sector and this excludes c. 300,000 employees who stay in Sharjah and commute to Dubai daily for work. These extensive reliance on the sector driven by infrastructure build up and the Emirate’s attempt to establish itself as a trading, finance and tourism hub for the region, like Singapore for Asia, made the growth self driven, and vulnerable to exogenous impacts of even a minor scale.

Apart from Qatar and Abu Dhabi, the sector’s contribution to GDP is falling in other GCC countries. A high proportion of the population was engaged in the construction and real estate sector in Oman (37%) and Qatar (35%) while KSA (8%) was in line with the average of developed countries. Qatar shows increased reliance on the sector in both the measures though not to an alarming extent.

Credit extended by banks for RE Mortgages in UAE grew at a CAGR of a staggering 85% from c.6% of the total credits extended to the private sector in 2005 to c13.5% in 2007 while the credit provided to the private sector grew only by less than half that rate at 35%. Bahrain, Qatar and Kuwait had extended credits at a higher proportion to credits extended to the private sector in general. The fact that the RE sector’s contribution to GDP has shrunk in Kuwait and Bahrain leaves the sector overprovided with credit and that naturally got corrected to a considerable extent in Bahrain and to a lesser extent in Kuwait during 2008. Qatar shows a moderate rise in the share of RE lending in line with the growing activity in the sector to satisfy the demand.

During the peaks of activity, as per press reports, banks in Dubai were lending anywhere from 80% to even 95% of the asset’s market value which too were at peak then. The range in the other GCC countries were from 60% to 90% and Kuwait placed a limit of KD 70000 per person. The higher equity demanded by Qatar (65%-70%) provides the banks with adequate cushion should there be a big drop in the prices.

Extensive speculation can also lead perpetrators of scams and frauds to use the opportunity created by the frenzy. The effect of the financial crisis and lack of liquidity has affected the property market in other countries as like Dubai but no scams of the size and significance has been unearthed in other countries so far as in case of Dubai.

Can other GCC countries/regions do a Dubai? 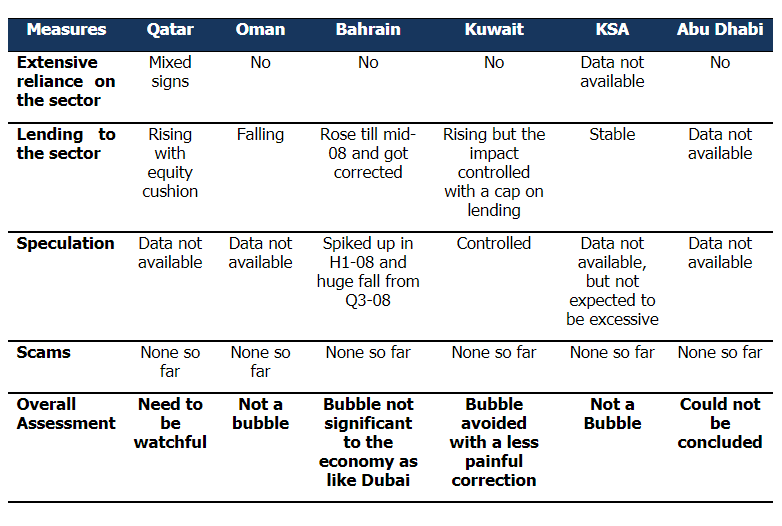 Kuwait Financial Centre 'Markaz', with total assets under management of over KD1.2 billion as of September 30, 2008, was established in 1974 has become one of the leading asset management and investment banking institutions in the Arabian Gulf Region. Markaz was listed on the Kuwait Stock Exchange (KSE) in 1997; and was awarded a BBB+ corporate rating by Capital Intelligence Ltd.
-End-