Markaz recently released a report on investing in Berkshire Hathway (BH). In this report, Markaz examines the philosophy behind and sustainability of Berkshire’s growth, its popularity compared to Apple, and concludes with an investment thesis on the company.

The company derives its investment philosophy from its chairman, president and CEO Warren Buffet, who has enumerated the following guidelines:

Berkshire share owners’ manual further elaborates 15 principles, of which the investment related principles stress upon measuring long term economic goals on a per share growth in intrinsic value, purchasing diversified businesses that generates cash in order to take advantage of business opportunities during market slumps, and bidding the company’s directors to invest a sizeable portion of their net worth in the company to emphasize on long term partnerships. This ensures that the agents are also the principles, and the management would work towards improving the company’s net worth. Warren Buffet has tied 98% of his net worth to Berkshire Hathway.

Over the years the Oracle of Omaha shared his investment ideology extensively be it through his annual correspondence with his investors through his letters to the shareholders as a part of Berkshire’s Annual report or during his annual AGM meeting where tens of thousands attend the event. Books have been written about Warren’s Investment philosophy.

Although Berkshire Hathway has a string of investments in flagship companies such as, American Express, Wells Fargo, GEICO and Coco Cola, the growth of the company over the past 50 years has been based on the trust reposed by the investment community in its chairman. Berkshire Hathway, post Warren Buffet, could move on either one of the following trajectories:

Since 1980 Berkshire’s stock grew at a staggering 75,295% or a 20% CAGR while the S&P 500 grew by 1,958% (9% CAGR) during the same period. In 1970, Berkshire’s insurance float was around USD 39mn; in 2014, the insurance float grew to USD 84bn. With such deep pockets, Berkshire Hathaway does not need to optimize its return using debt. The other way Berkshire optimizes its returns is by having a smart tax strategy. The main reason Berkshire does not pay dividends is due to the double taxation standard: the first on the net profit, and the other on the dividend paid to shareholders. Also, Berkshire investment deal structure protects it from incurring tax liabilities.

There is a vast difference between Berkshire Hathaway and Apple. Apple as a company is focused mainly on technology, and sells products directly to consumers all over the globe. On the other hand, Berkshire is a conglomerate that owns companies, which means that it has no direct contact with customers. Apple’s stock is closely followed by institutional investors, retail investors and traders, and the stock price reacts to the news faster, compared to Berkshire Hathaway.

High net worth individuals especially the first generation thinks extensively of estate planning and trying to make sure that their families are well taking care of. That said Berkshire Hathaway acts as a well-diversified mutual fund heavily weighted in North America. The exposure coupled with Warren Buffet’s investment style gives GCC investors an efficient, cost-effective, hassle free window to the US markets. The long term nature of an investment in Berkshire Hathaway makes it a perfect match for GCC investors planning for their families’ future, and looking for holistic exposure in fixed income, real estate, private equity or alternative investments.

Kuwait Financial Centre K.P.S.C “Markaz”, with total assets under management of over KD 1.12 billion as of March 31, 2015, was established in 1974 has become one of the leading asset management and investment banking institutions in the Arabian Gulf Region. Markaz was listed on the Kuwait Stock Exchange (KSE) in 1997. 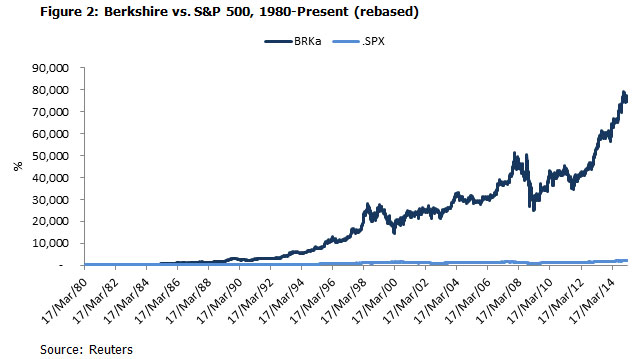