A Turbulent start to the year

Following the turbulence of GCC market performance in 2008, it would be nice for things to regulate a bit in 2009, however, judging from January 2009 performance, this does not look likely. GCC markets saw wildly divergent performances in January 2009. Saudi’s Tadawul was the only index to see a monthly gain, albeit a marginal one of 0.12%, while the rest of the GCC indices continued to flounder in the red. On a monthly basis, Qatar’s Doha Stock Market lost the most, with a decline of 23.72%, the DSM was the best performing GCC market in 2008, with a loss of 28%. The second highest loss was in the Kuwait Stock Exchange, which shed a further 13% in January following its 2008 loss of 38%.

GCC markets recorded a MoM decline of 8.87% in January following an 8.0% decline in December. Emerging markets lost 3% in January. The GCC decline was led by Qatar, Kuwait, and Oman, whose indices lost 23.72%, 13%, and 11.5% respectively in January. 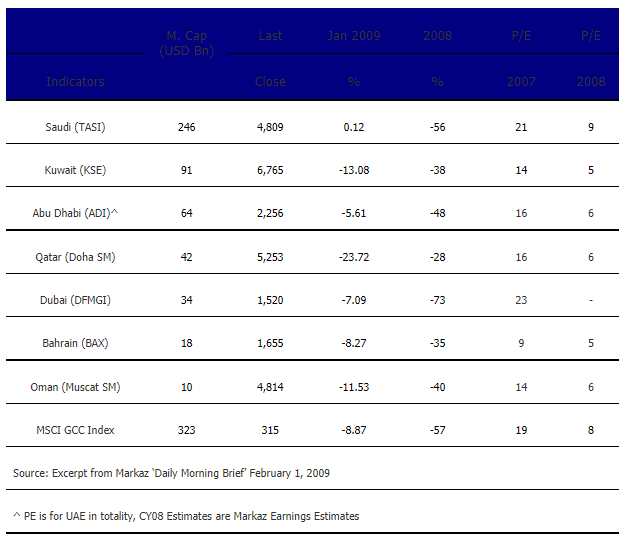 Volatility (as measured by the Markaz Volatility Index)

In January, volatility levels cooled off in Saudi Arabia, Kuwait, and Dubai by 20%, 20%, and 16%, respectively. However, Qatar volatility spiked by a whopping 109% in January and is currently trading 27% above its 120-day moving average. Oman is also exhibiting very high levels of volatility relative to its history.

Correlations among GCC markets continue to edge higher in tandem with common set of crisis being faced by the markets. However, compared to US markets (S&P 500) correlations continue to be attractive and in certain cases (Kuwait, Oman, & Bahrain) continues to be either negative or close to zero.

^ PE is for UAE in totality, CY08 Estimates are Markaz Earnings Estimates 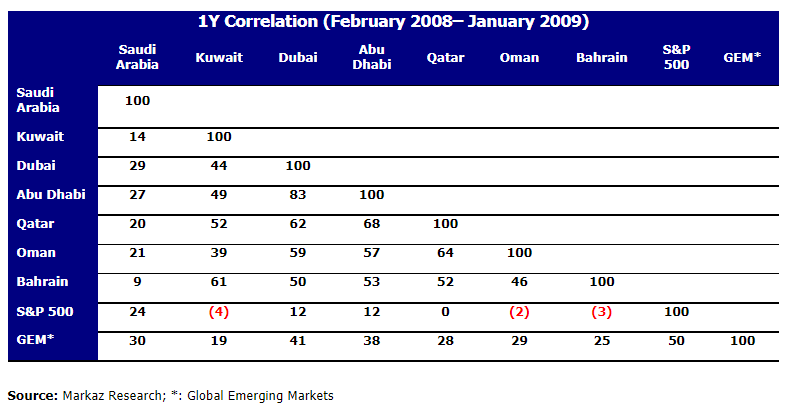 The Kuwait Index fell 13.08% in January, second only to Qatar’s Doha SM.  January’s loss was the index’ seventh consecutive loss. The price index’s performance was determined by the Investment and Banking indices, which plunged by 17.98% and 16.59% during the month. Even the Insurance index, which was the only sector to gain in 2008, was not immune to the losses, declining 5.69% for January.

The total volume traded in Kuwait decreased by 5% in January, whereas the total value traded decreased 38% to USD3.13 Bn in the same month.

The UAE markets were amongst the most affected by the global credit crisis in 2008, with the DFM shedding 72.4% during the year and the ADX losing 47.5%. In January, the markets lost a further 7.09% and 5.61%, respectively. On a market cap weighted basis, UAE declined by 6.12% in January. The Materials sector index in Dubai fell by 19.47%, the largest among DFM sector indices, while the Banking index was flat for the month. In Abu Dhabi the Real Estate sector index plunged 23.16% followed by Banks & Financials, which shed 10.9% for the month.

Trading activity in Dubai and Abu Dhabi remained on a high note. The total volume traded in UAE in January increased 58% (5.71 Bn), whereas the total value traded increased 34% (USD2.43 Bn in January). Concentration of the top five stocks in terms of volume and value traded to market capitalization was 11% and 28%, respectively, in January.

The Doha Stock Market (DSM) was down 28.1% during 2008, due to weak investor sentiment caused by the credit crisis. The losses continued into January where the index lost an additional 23.72%. This would rank as the second worst month in its history. Losses on the DSM were led by the Industrial and Banking sectors, which lost 24.68% and 23.77%, respectively, in January.

In January, total value traded on the DSM shed 51% to equal USD 1.41 bn while total volume traded shrank by 34% to equal 215 mn.  Concentration of the top five stocks in terms of volume and value traded to market capitalization was 30% and 40%, respectively, in January.

In January, total value traded plunged 84% to USD 33 mn while total volume shrank 82% to 36 mn. Concentration of the top five stocks in terms of volume and value to the market capitalization was 10% and 18%, respectively.

Kuwait Financial Centre 'Markaz', with total assets under management of over KD1.2 billion as of September 30, 2008, was established in 1974 has become one of the leading asset management and investment banking institutions in the Arabian Gulf Region. Markaz was listed on the Kuwait Stock Exchange (KSE) in 1997; and was awarded a BBB+ corporate rating by Capital Intelligence Ltd.